Can the Matildas win next year’s Women’s World Cup? On the evidence gathered so far throughout Tony Gustavsson’s rocky reign as coach, it seems a long shot – and as standards rise at a frightening rate in the women’s game, probably ever-lengthening.

But the Swede, who has officially moved full-time to Sydney as focus sharpens towards the biggest football tournament this country has ever seen, reckons that anything is possible – so long as everyone, inside and outside the team’s inner circle, believes. 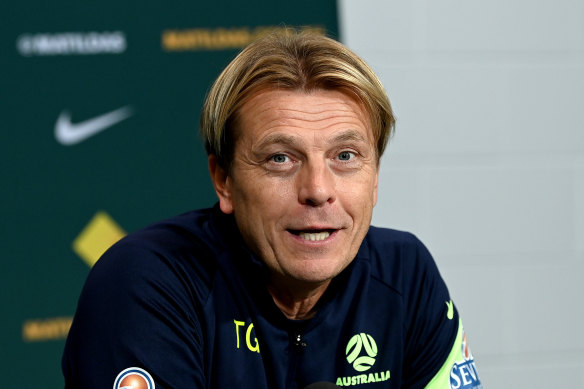 Tony Gustavsson speaks to the media in Brisbane ahead of Australia’s clash with Canada.Credit:Getty

That Ted Lasso-esque response was part of a long-winded answer Gustavsson gave to a direct question on Australia’s chances at the World Cup, which he noted was less than a year away. Or, in other terms, just five more FIFA international windows, 32 meaningful days together, and only 10 more “proper” training sessions with a full squad.

Saturday night’s clash at Suncorp Stadium against Canada, the reigning Olympic gold medallists, will be another good yardstick as to how the Matildas measure up against the world’s best – albeit both teams are missing a few important players. Gustavsson volunteered his list of absentees before his press conference on Friday, noting that in Brisbane he’d be without seven of his starters from Tokyo 2020: Ellie Carpenter, Hayley Raso, Steph Catley, Tameka Yallop, Chloe Logarzo, Caitlin Foord, and Kyah Simon.

It felt like a way of tempering external expectations, which, as he later explained, are distinct from the team’s “belief” in what it can accomplish. What’s clear is that Gustavsson badly needs a result, or at least a couple of impressive enough performances, to convince fans and his growing number of critics to keep the faith in his long-term plans after winning only eight of his 24 games at the helm so far – the worst success rate for any coach since Chris Tanzey in 2000.

When asked if Gustavsson thought, 352 days out from the final at Sydney’s Accor Stadium, that the Matildas were capable of hoisting that trophy, he said his focus was on ensuring the team reached its potential, that their “very aggressive” mindset valued goals scored over clean sheets, and that time would tell how far that could take them. 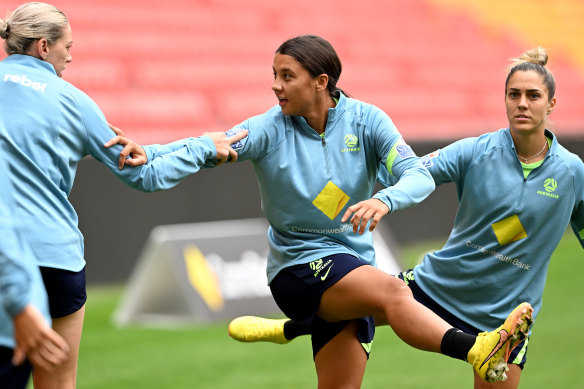 The Matildas are depleted for this international window but superstar skipper Sam Kerr is on deck.Credit:Getty

“When you expect people to do something, you need to base expectation on [a] realistic measure, like a ranking or quality of a team,” he said.

“And if we can come to a point where also everyone outside of the circle really believe that these players can achieve something that might not be expected of them … look at what England did in the Euros, for example, with the home nation supporting them. If we can believe, then it’s going to be a very, very interesting World Cup.”

The Matildas will shift camp to Sydney, Gustavsson’s new home, ahead of Tuesday night’s rematch with Canada at the new Allianz Stadium – the first football match that will be played there.

“I’m still looking for a place to stay,” he said. “I’m staying at a hotel for now. It feels so good to finally be here on home soil for a World Cup that’s coming next year. Every minute counts.”

Meanwhile, the Women’s World Cup could be quickly followed another major international tournament as Football Australia pushes full steam ahead with a bid for Asia’s biggest women’s football showpiece.

Having previously flagged their intent to host both the next Asian Cups for men (2023) and women (2026), FA is putting all its eggs in the latter basket after announcing it was withdrawing from the running for the former.

The Asian Football Confederation put out a sudden call for expressions of interest after China, the scheduled hosts for the men’s Asian Cup, pulled out at short notice due to complications relating to the country’s zero-COVID police.

Federation sources said FA had studied the bidding requirements and decided there wasn’t enough time to put forward a bid it would have been happy with. However, they remain fully committed to hosting the women’s edition in 2026, for which it would likely be considered among the favourites, and would continue the momentum in the growth of women’s football expected from the World Cup.

FA also holds long-term ambitions to host the men’s World Cup, having previously floated the possibility a joint bid with New Zealand or Indonesia for the 2034 tournament.