In 2018, more than 3.57 billion people tuned in to watch the FIFA World Cup in Russia. This year, one of the world’s largest sporting events could garner even more attraction on the world stage, amid controversies over its host country, Qatar.

It’s also set to be a tough competition for the Socceroos as the squad plays its fifth consecutive World Cup tournament. 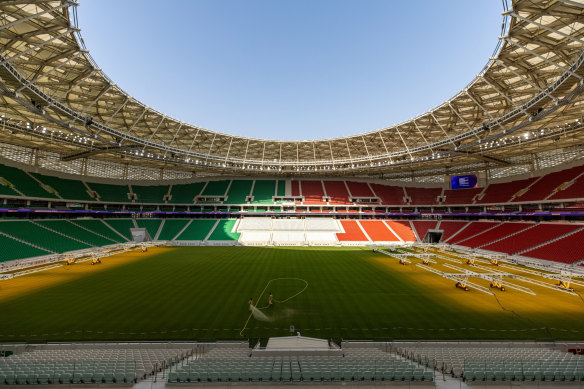 As Australia peg their hopes on being the underdogs, we’re here to answer the burning questions: at what ungodly hour will you need to wake up? What are the Socceroos’ chances of winning? How can you watch the matches?

Where is the World Cup being held?

Qatar won the rights to host this year’s Cup in 2010. Since then, it’s been a topic of controversy, with many criticising FIFA’s decision to award hosting rights to the Middle Eastern state, mostly over the country’s treatment of migrant workers and LGBTQI+ people. Homosexuality is a criminal offence in Qatar.

The Guardian reported that at least 6500 migrant workers from Bangladesh, India, Pakistan, Sri Lanka and Nepal died while building billions of dollars worth of infrastructure for the event.

The Socceroos were the first competing side to release a statement in protest against Qatar’s human rights record.

How do I watch the World Cup?

All 64 games will be available free-to-air on SBS, and can be streamed on SBS OnDemand, starting from November 21.

When are Australia’s games on?

It’s a bit of a mixed bag, with two early mornings that soccer fans will need to push through to support the squad.

How do nations qualify for the tournament?

There are 211 FIFA members eligible for the World Cup, so how is that number narrowed down to 32 nations?

The tournament is made up of teams from six continental zones, known as confederations. They are Africa (CAF); Asia (AFC); Europe (UEFA); North and Central America and the Caribbean (CONCACAF); Oceania (OFC); and South America (CONMEBOL). 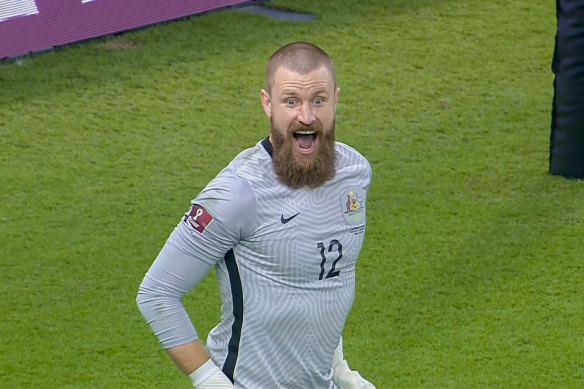 The viral celebration: Goalkeeper Andrew Redmayne celebrates after making the save in the penalty shootout that resulted in the Socceroos qualifying for the 2022 World Cup.Credit:Network 10

Each confederation is given a certain number of spots, determined by FIFA. For example, Oceania can have zero or one nation, and Africa is given five spots. The nations within these confederations go through qualifying tournaments to earn berths at the World Cup.

Australia qualified for the Cup in June during a nerve-racking game against Peru, in which substitute goalkeeper Andrew Redmayne’s celebratory dance went viral and earned him the moniker of “the Grey Wiggle”.

How does the tournament work?

Once the full pool of nations is determined, a draw is used to split these 32 teams into eight groups, consisting of four teams each.

During the group phase, running from November 20 to December 2, each team within each group will play each other once. Teams receive three points for a win, one point for a draw, and no points for a loss.

The winner and runner-up of these three matches will advance to the knockout stage, also known as the round of 16.

FIFA has a downloadable version of the match schedule.

What are the groups?

There are eight groups made up of four teams in each. Australia are in group D, which includes France, Denmark and Tunisia.

Unfortunately for Australia, we’ve been given a bit of a tough draw, dubbed a “group of death”. To make the knockout stage we’re up against reigning champions, France. The French have won two FIFA World Cups, one of the six sides in the cup’s history to do so.

Also challenging will be Denmark, a top-10 ranked opponent, and considered the clear second favourite within the group to progress to the knockout round. Over the country’s five World Cup appearances, they’ve made it to knockout round four times, and in 1998 made it to the quarter-finals.

Tunisia have a total of two victories over their 15-match World Cup career, and are No.30 on FIFA’s world rankings. Fans are looking to this match as a potential three-point gain for the Socceroos.

Will Australia make it out of their group of death?

It’s unlikely, but not impossible.

As The Age and Sydney Morning Herald sports reporter Vince Rugari, who is covering the tournament in Doha, wrote: “Expectations for Graham Arnold’s men, who begin arriving in Qatar over the next few days, are not particularly high. After a torturous qualification campaign, it’s a minor miracle they will be there at all – and it’ll be a bigger one if they get out of a group that features reigning world champions France, Denmark – a dark-horse team filled with UEFA Champions League players – and Tunisia, who look beatable enough on paper but possess threats that shouldn’t be underestimated.”

Our experts have made their own predictions. You can put together your own with our FIFA World Cup 2022 Predictor.

What are the rules of the knockout stage?

Unlike the group phase, the knockout stage is elimination: the winners advance to the next round, and the losers go home. Do not advance to go, do not collect $200.

It also means that draws aren’t an option: If a game is tied after 90 minutes, the game goes into 30 minutes of extra time. If that game is still tied, then there’s a penalty shootout. Whoever wins that shootout moves to the next round.

Who is in the Australian squad?

But there are some injury concerns over Martin Boyle, and Melbourne City’s Marco Tilio has been flown over to Qatar as cover.

Five-time winners Brazil, who also top the FIFA world rankings, are the most likely. Other world heavyweights include Argentina, Spain and reigning champions, France.