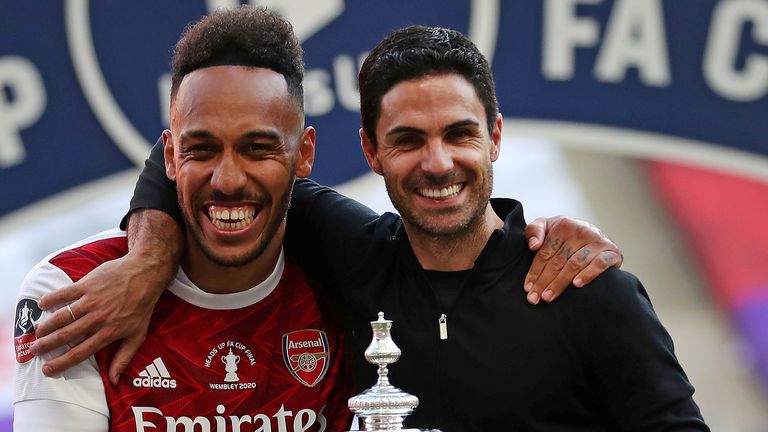 Arsenal head coach Mikel Arteta hailed his side’s FA Cup victory over Chelsea as the greatest moment of his career – and vowed to build his side around two-goal hero Pierre-Emerick Aubameyang.

The Gunners won the FA Cup for a record 14th time by beating Chelsea 2-1 at Wembley, while they also became the first club to beat a specific opponent in as many as three finals in the competition.

Arteta paid tribute to the efforts of his players and when asked if this was the greatest moment of his career, he said: “I think so. I’m really proud of what we’ve achieved as I know the difficulties and everything we’ve been through.

“For me, personally, it’s been so tough the last six months for a lot of things that have happened in our lives, but I had only one mission when I came here which was to make the players and the staff believe that we could do it. “We had to change our energy and our mentality, and just by seeing them in the dressing room, all together and enjoying it, makes me more proud and it’s a consequence of that. We can achieve things and win titles together.”

Arteta said he was hopeful of persuading captain Aubameyang to remain at the club with the Gabon striker’s contract is due to end next year.

“I hope there will be [news in the next week]. Everything is based on my conversations with him, how he sees his future and what I expect from him and the team that I want to build around him,” Arteta continued.

“The conversations are with the people who are influential around him. The club respect him and admire him. The players are all behind him and we know the players that we have and we have to value him. If we reach all of those points, I think that we’ll get an agreement with him.” 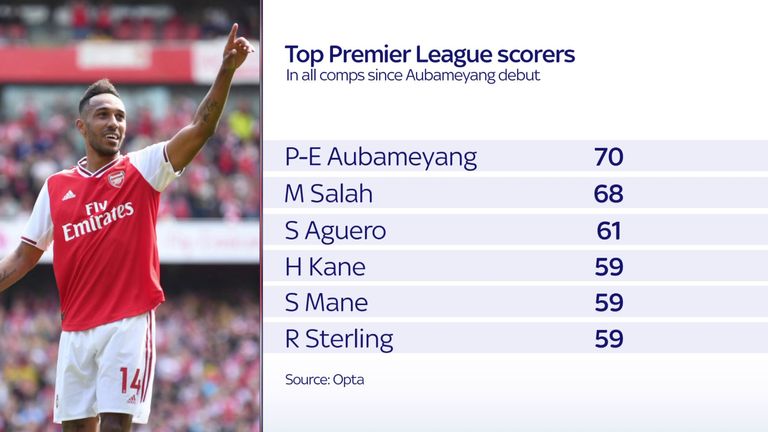 Aubameyang dropped the FA Cup during the trophy presentation, and Arteta quipped: “He needs more experience with trophies… we can get him used to that!

“Big games require big moments from big players… he delivered that in the semi-final and he’s done it again in the final and that’s why you ask about those players.

“Some were questioning whether he could do it in big games, but he was a big part in delivering this trophy. We’re so proud to have a player like him in our squad.”

Arteta paid tribute to Manchester City boss and mentor Pep Guardiola as well as the fitness coach from his time at the Etihad, Lorenzo Buenaventura, who he described as “two key figures” in his development. 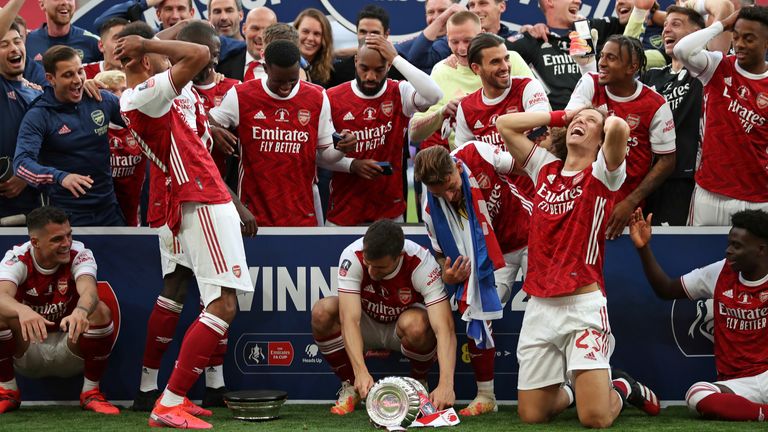 “They always believed in me and they always gave me incredible opportunities to work with both of them,” he added.

“I know I wouldn’t be sitting here today without them. We had an incredible journey together and always they gave me the opportunity to decide my future. It wasn’t an easy moment [leaving City] but I have to thank them for everything.

“When I walked through the doors, I completely understood the needs of this football club. They’re so high and I wanted to fulfil those demands. “I knew the expectations – to win this trophy is absolutely for the supporters. Hopefully they can enjoy this success together while maintaining the social distance because this is for them.

“I knew the challenges I was facing on the day I made the decision to come here, and the expectation that we’re always going to have because the history and the legacy of this club is incredible.

“This is the first trophy, let’s enjoy it today, and there’s a long way to go improve on many other things, but it’s something that I’m very proud of. We’ve changed a lot of things and since we joined the players have been fantastic. Chelsea boss Frank Lampard must now lift his squad for the resumption of the Champions League campaign.

Chelsea trail Bayern Munich 3-0 from the first leg of their last-16 tie as they head to Germany ahead of the culmination of the tie next Saturday. Lampard felt his side had not played to their strengths and admitted Arsenal were right to be awarded a penalty in the first half.

“We didn’t play well enough,” he said. “It wasn’t a sending off for me – I think that was pretty clear.

“He scores two goals – one being a penalty – and we were very clear with the players about the threat that Arsenal provide with long balls behind you. They play football as well, but they also have a threat of a long ball behind you, particularly in those channels. 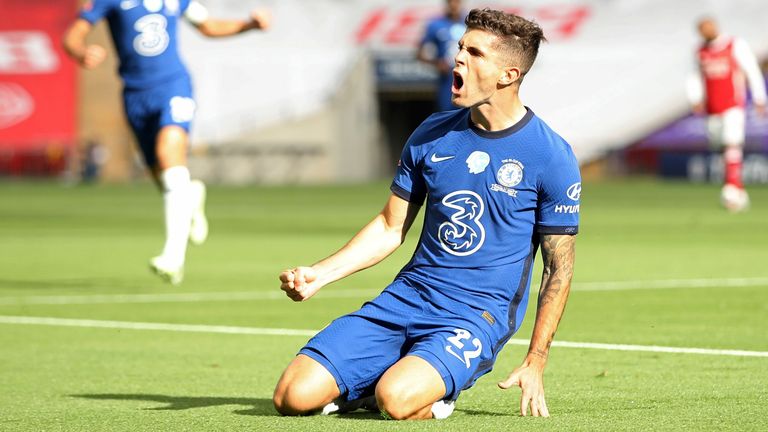 “A frustrating part of today’s game was that I showed that to a lot to the players and we worked on it, but we allowed him in easily. He’s a top-class player, and the second goal is the sort of speed and quality of a player at this level that wins games like these.

“We didn’t play great today for us but we did compete in the game and we had chances. When you give an opportunity like that to Aubameyang, he will finish you off.”

Chelsea will be without Cesar Azpilicueta and Christian Pulisic after both pulled a hamstring in the game at Wembley while Pedro appeared to dislocate his shoulder in what could prove to be his final appearance for the club before his move to Roma.

“I can’t criticise the players for their approach and their desire to win this game,” Lampard added. “I said we didn’t play well enough and the players know that in the dressing room. 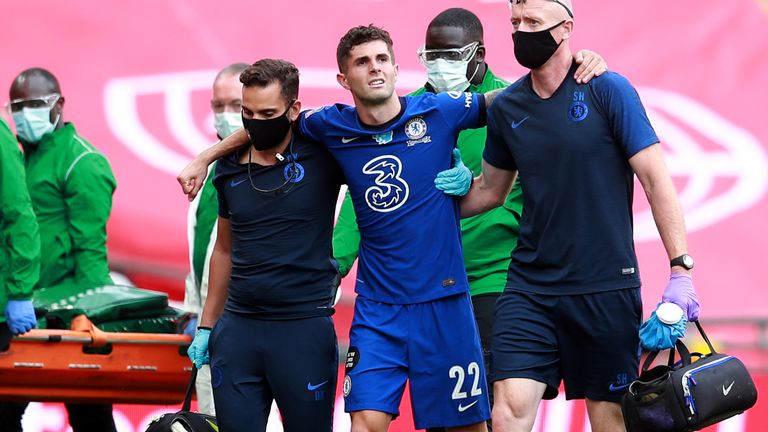 “We went into the game with Willian pulling out in the last 24 hours or so, and it was the same with Ruben Loftus-Cheek. We then had two hamstrings and a dislocated shoulder with Pedro. It’s been a busy period for us and the players have given a lot.

“They’ve given everything and 10 men in the last 20 minutes was a really difficult challenge for them. We shouldn’t be too stuck on today… of course we’re disappointed tonight but we need to look at the whole season, where we’ve managed to finish in the league.

“That’s been a huge plus for us and today would’ve been the icing on the cake, but it wasn’t to be.

“I don’t know the full extent of the injuries, but I know the hamstrings with Azpi and Christian – they have to be scanned and assessed over the next few days. They clearly won’t be fit for next week. Pedro, I believe it could be a dislocated shoulder but don’t go too soon on that.