Watching Fiorentina suffer a 4-0 thrashing at home to Lazio on Monday night, Robbie Neilson must have felt a slight sense of unease in the pit of his stomach.

From a Hearts point of view, it was probably the worst thing that could have happened ahead of this Europa Conference League clash in Florence.

There was always the possibility of a Fiorentina backlash, particularly given that their manager Vincenzo Italiano had faced questions on Wednesday about his job being on the line. 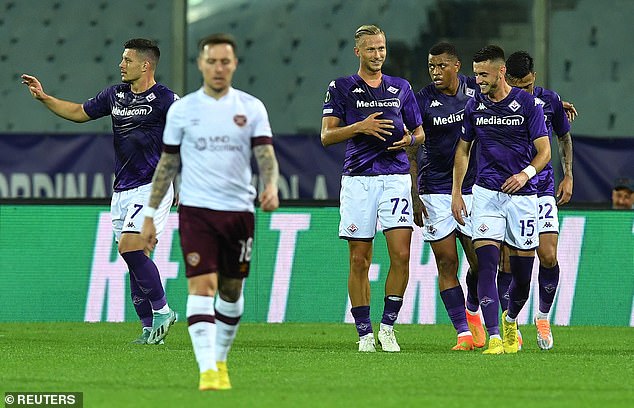 And so it proved. Like a lean middleweight boxer looking to avenge a shock defeat, Fiorentina invited Hearts for a sparring session, took aim, and used them as a punchbag.

La Viola were fully loaded, Italiano opting against resting some of his key players knowing the consequences if the unthinkable were to happen.

Just as they had done in the 3-0 defeat to the Italians at Tynecastle last week, Robbie Neilson’s side lost an early goal and never recovered.

On this occasion, Fiorentina were 4-0 up by half-time. While they remain a lowly 13th place in Serie A, the brutal reality is that Hearts, the third-best team in Scotland last season, couldn’t get near them.

Fiorentina feasted on Hearts’ frailties and Neilson’s men must now lick their wounds ahead of a trip to face Aberdeen at Pittodrie on Sunday. 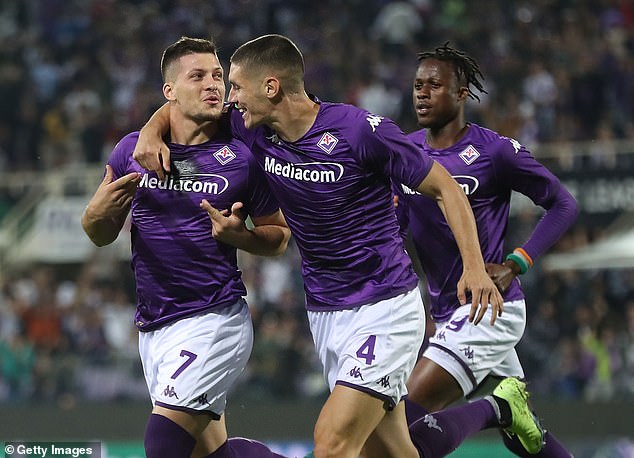 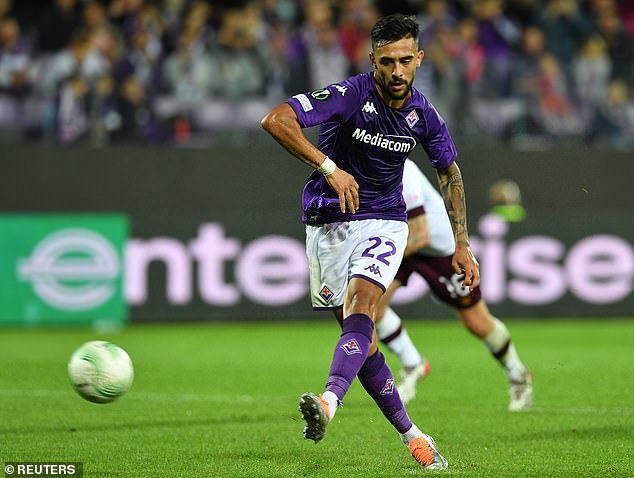 What a sobering week this has been for our clubs. Rangers are now on their way to setting a multitude of Champions League records after a 7-1 humiliation against Liverpool at Ibrox on Wednesday.

Celtic remain porous and profligate in equal measure, while Hearts will now travel home dazed and confused after being flattened in Florence.

The three Scottish clubs have now won only once in a combined 12 games between them in the group stages of European competition this season. It is a pitiful return.

Neilson’s side are now all but out of the Conference League and, once European football disappears from the horizon, Hearts fans will start to ask why their team have won just five times in 21 games.

That run stretches back to the end of last season and it will soon lose the layer of gloss that comes with European football. 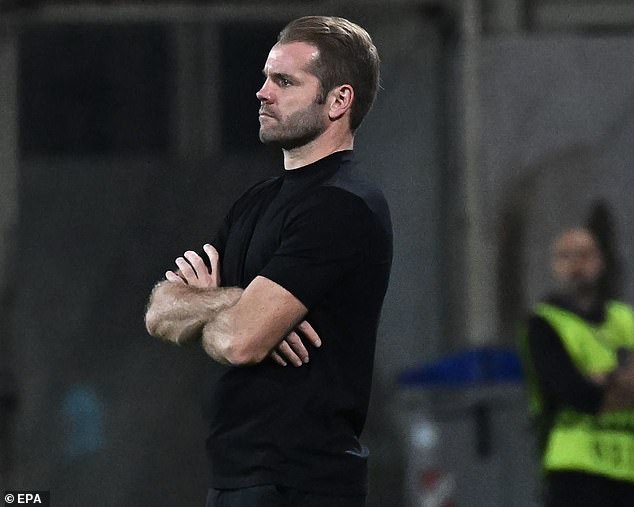 That said, a travelling support of almost 4,000 Hearts fans were still singing long after the final whistle had blown. This was a trip not to be missed, or soured, from their point of view.

Hearts always looked like they might be up against it. Down to the bare bones in defence due to a rash of injury problems, they were without key players whose experience would surely have helped.

As for the man in charge, Robbie Neilson played in the 1-0 UEFA Cup win over Bordeaux in 2003, a game which still stands as the club’s finest hour away from home in Europe.

The former Hearts and Scotland right-back might have been temped to take his boots with him to Florence just in case. As it was, though, Nathaniel Atkinson was deployed in that position.

Atkinson had scored a last-gasp equaliser against Kilmarnock last weekend and he would feature prominently in the early stages last night, albeit not in a positive fashion. 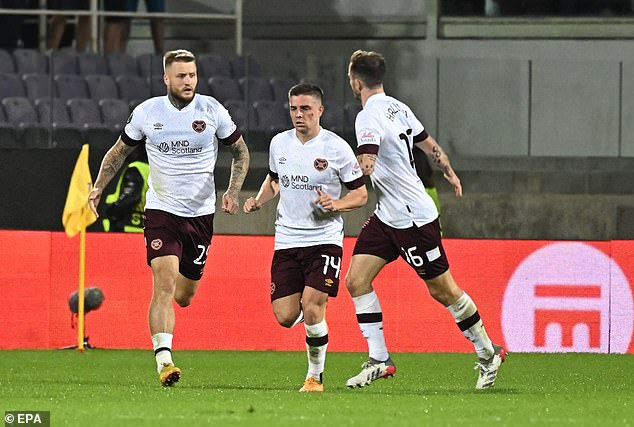 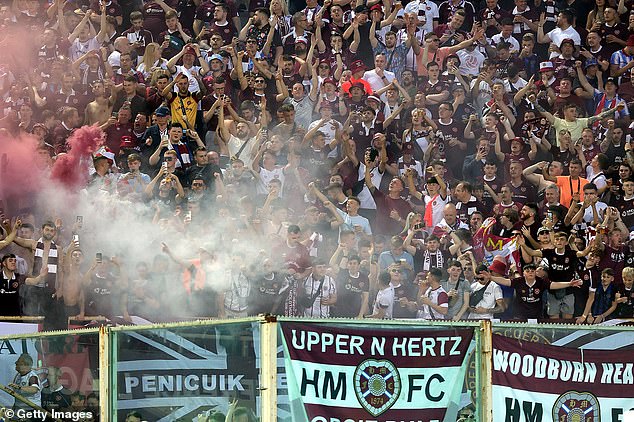 Despite their shortcoming, the travelling Hearts faithful did not stop making noise throughout

After Fiorentina had come to their senses following the initial shock of Humphrys hitting a post within the opening 30 seconds, they began asking major questions of Hearts.

With three minutes on the clock, a Cristiano Biraghi free-kick wide on the left teed up Christian Kouame to bullet a header towards goal.

Craig Gordon clawed it away, as he so often does, but Atkinson had been injured in amongst a ruck of bodies in the box.

It looked like he might need to be stretchered off. By the time he eventually did depart after 16 minutes, Hearts were already a goal down.

Painfully for Hearts, Atkinson had been off the field receiving treatment for the initial injury when Fiorentina scored the opener on five minutes.

They took a short corner on the left and Biraghi swung in an inviting cross. Luka Jovic peeled off Alex Cochrane to direct a header into the far corner of Gordon’s net. 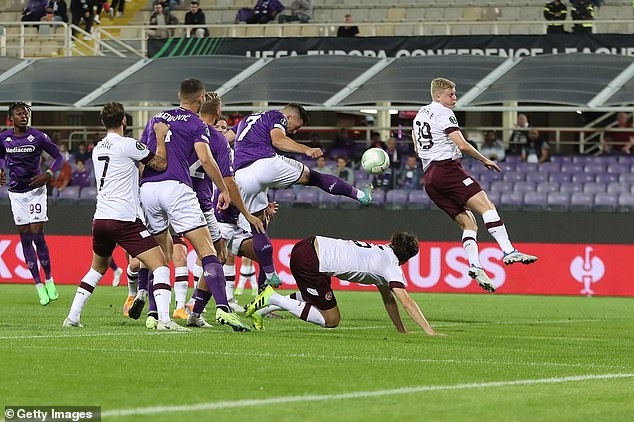 As early as the five minute they were behind, with Luka Jovic converting the opening goal 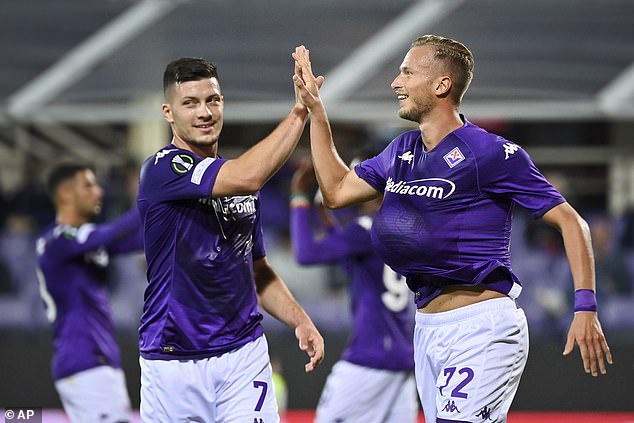 Hearts never recovered from the concession of an early goal in the 3-0 defeat to Fiorentina at Tynecastle, and so it proved once again last night.

Rolando Mandragora had already smashed the ball against a post by the time La Viola doubled their lead on 22 minutes.

Barrie McKay was perhaps a tad unfortunate to be penalised for a foul on the edge of his own box, but the outcome from Biraghi was brutally and brilliantly decisive – whipping the free-kick into Gordon’s top corner.

With a goal and an assist after barely 20 minutes, Fiorentina skipper Biraghi was having a huge influence on the game from left-back.

Humphrys had another decent chance on 24 minutes. After Cammy Devlin had won the ball deep in his own half, McKay fed Humphrys in the left channel but the striker dragged his effort wide.

But Fiorentina were rampant by now. They made it 3-0 on the half-hour mark when Kouame and Jovic had combined to allow Nico Gonzalez to slot low past Gordon at the back post.

Given what unfolded at Ibrox just 24 hours earlier, you feared for Hearts at this point. We hadn’t even reached half-time yet, already, it was on the brink of being a humiliation. 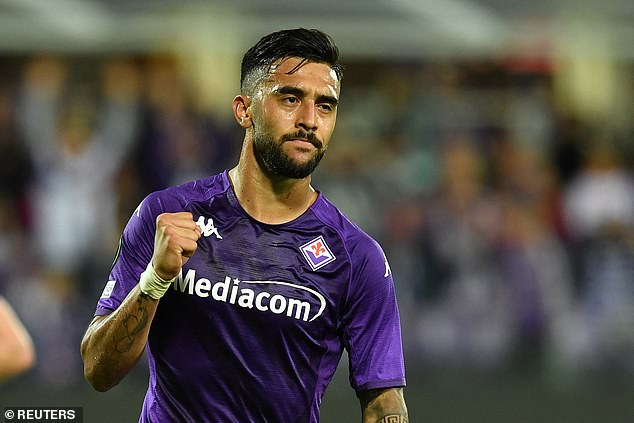 After Humphrys’ consolation, Gonzalez added his second and Fiorentina’s fifth from the spot

A fourth goal arrived for the Italians on 38 minutes when midfielder Antonin Barak played a one-two with Kouame and dispatched the ball beyond Scotland No 1 Gordon.

Trailing 4-0 at the interval, the second half was an exercise in damage limitation as much as anything else for the Tynecastle side.

Humphrys had been given the nod ahead of Lawrence Shankland up front – and he pulled a goal back just a couple of minutes into the second half.

Cue bedlam in the Hearts end of the Stadio Artemio Franchi. Their team had been battered in the first half, but here was a slither of consolation.

But it was only a minor footnote in the end. Fiorentina cruised through the second half and made it 5-1 when Alex Cochrane had fouled Riccardo Saponara, with Gonzalez clipping the penalty down the middle past Gordon.

Rio Ferdinand calls for Premier League season to be voided