Arsenal boss Mikel Arteta will have several dilemmas two weeks today when the Gunners visit Crystal Palace on the opening day of the Premier League season. Arsenal have two further pre-season friendlies before the match at Selhurst Park and players are pushing for a spot in the starting XI.

Arteta has made four signings so far this summer and Oleksandr Zinchenko will be the fifth. The Ukraine star was sitting with technical director Edu during the 3-1 win over Orlando in the early hours of Thursday morning.

Fellow new signing Gabriel Jesus is almost a nailed-on starter for the opener at Selhurst Park if he remains fit. There are already a few injury doubts ahead of the start of the new campaign.

But Arteta still has a number of other conundrums to solve. Express Sport looks at five players who are pushing to start against Patrick Vieira’s side. 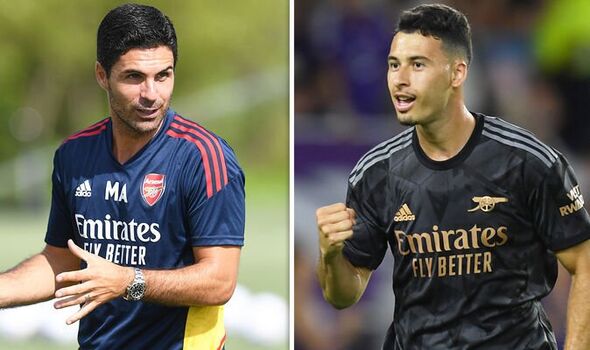 Saliba wants regular first-team football after returning from his loan spell at Marseille. The Frenchman is yet to make a first-team appearance for the Gunners since his £27million arrival in 2019.

However, Takehiro Tomiyasu is currently out injured and is yet to feature in pre-season. That could see Ben White shifted to right-back and Saliba slotting in alongside Gabriel Magalhaes in the middle of defence.

An alternative to White at right-back would be Cedric. The Portugal international played a lot in the second half of last season and could start this campaign on the right of defence.

Arteta will be hoping Tomiyasu is fit soon because he is undoubtedly the first choice in that position. But Cedric will be hoping to impress if given the opportunity. 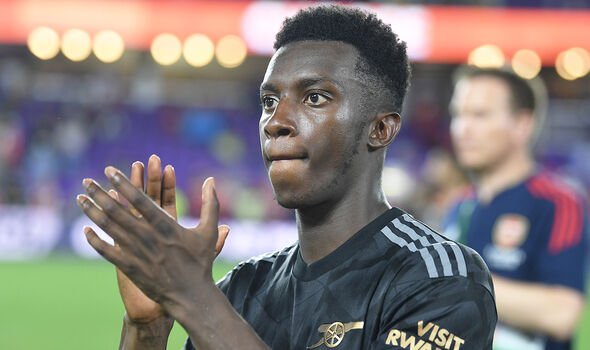 Martinelli scored in the win over Orlando but has plenty of competition for a starting spot. The Brazilian has been a regular starter in 2022 but has netted just twice in his last 22 competitive appearances for the Gunners.

Doubts over Emile Smith Rowe’s fitness could provide Martinelli an opportunity. But new boy Fabio Vieira may also be challenging for that one spot.

Nketiah also scored against Orlando and after the match Arteta said he would like to give him more minutes in a strike partnership with Jesus. Nketiah finished last season strongly with five goals in his last seven Premier League appearances.

The 23-year-old signed a new contract earlier this summer to end speculation over his future. He will be determined to be a key player for the Gunners this term.

He hasn’t made an appearance in a friendly yet but Zinchenko could be thrust into debut action at Palace. Kieran Tierney remains out with what Arteta described as a minor injury.

Zinchenko can play in midfield but will be the left-back if Tierney is unavailable.