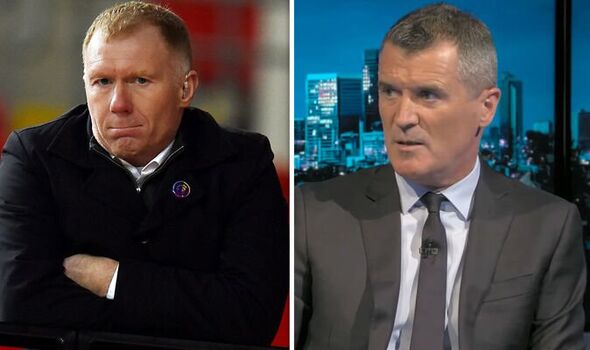 Roy Keane named his all-time Manchester United Premier League XI on Monday – but there were some notable absentees. Keane appeared on Sky Sports’ Monday Night Football and was asked to pick a team of United’s greatest players from the last 30 years.

The former Red Devils captain included some obvious selections. Ryan Giggs made it on the left wing, with David Beckham on the opposite flank.

His punditry colleague Gary Neville slotted in at right-back with Wayne Rooney up front with Cristiano Ronaldo. It is fair to say Keane didn’t have the greatest relationship with Peter Schmeichel, but the big Danish goalkeeper was chosen.

However, there will be question marks over the inclusion of the likes of Paul Ince and Jaap Stam, who only played for the club for three years. Express Sport picks five United legends who could have made it into Keane’s team.

Ferdinand has made more appearances for United in the Premier League era than any other central defender. However, Keane decided to partner Stam with Gary Pallister.

Ferdinand may have had his best years at United after Keane left the club in 2005. But six Premier League titles and a Champions League is a CV not to be sniffed at.

Keane admitted Ferdinand was his third choice behind Stam and Pallister. However, many would feel the Englishman should have been in the team already.

Vidic didn’t play with Keane but was a colossus at the back for United in almost nine years at the club. The Serbian formed a formidable partnership with Ferdinand as United continued to win league titles despite the rise in success of Chelsea.

Vidic was the perfect complement to Ferdinand with their contrasting styles of play. The no-nonsense centre-back was one of Sir Alex Ferguson’s greatest-ever buys at around £7million.

Evra joined United at the same time as Vidic and they both had a shaky start at the club. But he also became a true United legend and captained the side in the latter stages of his spell.

Evra won five league titles and the Champions League but Keane stuck with his former Republic of Ireland team-mate Denis Irwin. He claimed he would pick Irwin “every day of the week” over all other potential options at left-back.

However, he didn’t get into Keane’s best United side of the era. Keane played alongside Scholes for over a decade in the middle of the park, so few will know his game better.

Only Giggs has made more Premier League appearances for United than Scholes. But both Ince and Bryan Robson get the nod ahead of him.

With Ronaldo and Rooney up top, perhaps finding a spot for Cantona is a little difficult. But the Frenchman is often credited with playing a considerable role in United ending their 26-year wait for a top-flight title in 1993.

Cantona went on to win a further three titles as well as two FA Cups. But perhaps Rooney and Ronaldo’s success in the Champions League puts them ahead of the charismatic forward.