Tottenham midfielder Dele Alli suffered an embarrassing moment to forget during his side’s FA Cup victory over eighth-tier Marine on Sunday afternoon. The 24-year-old took a tumble in the first half of the third round clash after losing his footing, much to the amusement of his Spurs team-mates.

Alli was preparing to receive a pass from defender Ben Davies when his studs gave way underneath him, causing the former MK Dons man to topple over.

Gareth Bale, Sergio Reguilon, Tanguy Ndombele and Son Heung-min were all spotted giggling on the substitutes’ bench following the incident, with the latter looking particularly pleased in the face of his colleague’s misfortune.

Son appeared to aim a humourous dig at Alli once he had dusted himself off, with the midfielder flashing a smile upon hearing the teasing laughter coming from the Spurs bench.

Meanwhile, Bale flashed an imaginary card at his team-mate, joking that Alli had dived.

Jose Mourinho named a strong side for Sunday’s clash, handing starts to a number of senior first-team players.

JUST IN: Tottenham keen on Liverpool target who fills one transfer wish 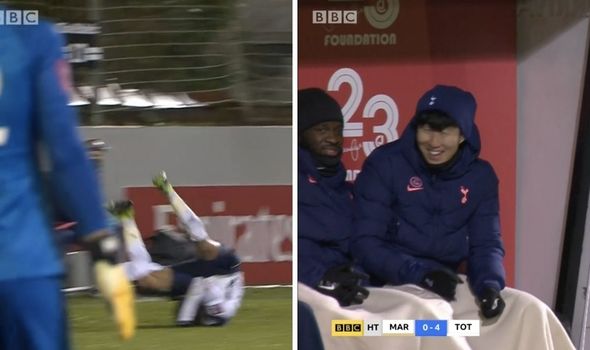 The likes of Toby Alderweireld, Lucas Moura and Moussa Sissoko were named in the Spurs eleven as the north London club went into the match aiming to avoid being on the receiving end of the competition’s biggest shock of all-time.

Marine came within inches of taking a sensational early lead when Neil Kengni’s fiercely-struck effort rattled the crossbar from miles out, before the floodgates opened for the visitors.

A fantastic free-kick from Lucas and Carlos Vinicius’ first-half hat-trick ensured a four goal advantage for the Premier League side at the interval.

During the second half, Alfie Devine scored his first professional goal for the club to provide some added gloss to the scoreline.

Alli was replaced by Bale with just over 25 minutes left to play at Rossett Park.

The Englishman played well against Marine but has struggled at times this season, coming under fire from Mourinho following Tottenham’s Carabao Cup victory over Stoke City last month. 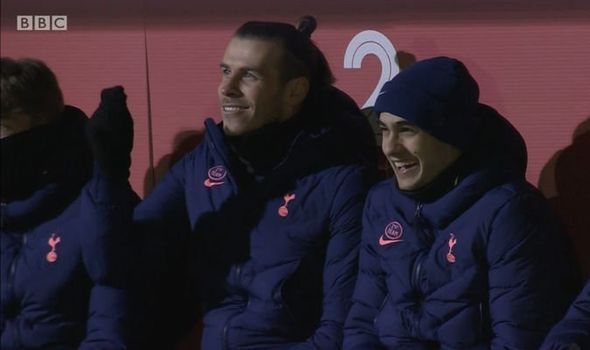 The Portuguese boss accused Alli of creating problems for the rest of the team after he gave the ball away for the Championship outfit’s second-half equaliser.

“For me, a player that plays in that position is a player that has to link and create and not to create problems for his own team,” Mourinho told reporters after the final whistle.

“We were unbalanced because when you are in possession, you have full-backs out wide and another midfielder in a different line, and they caught us in a counter-attack and they transformed the result of the game that was totally in our hands, so yes I am upset.”