Gareth Bale expressed his pride after Wales made the knockout stage of Euro 2020.

Wales went down to a 1-0 defeat to Italy in Rome on Sunday but finished second in Group A, above Switzerland on goal difference.

Ethan Ampadu was shown a straight red card for his late challenge on Federico Bernardeschi and Wales played the final 35 minutes at the Stadio Olimpico with 10 men. 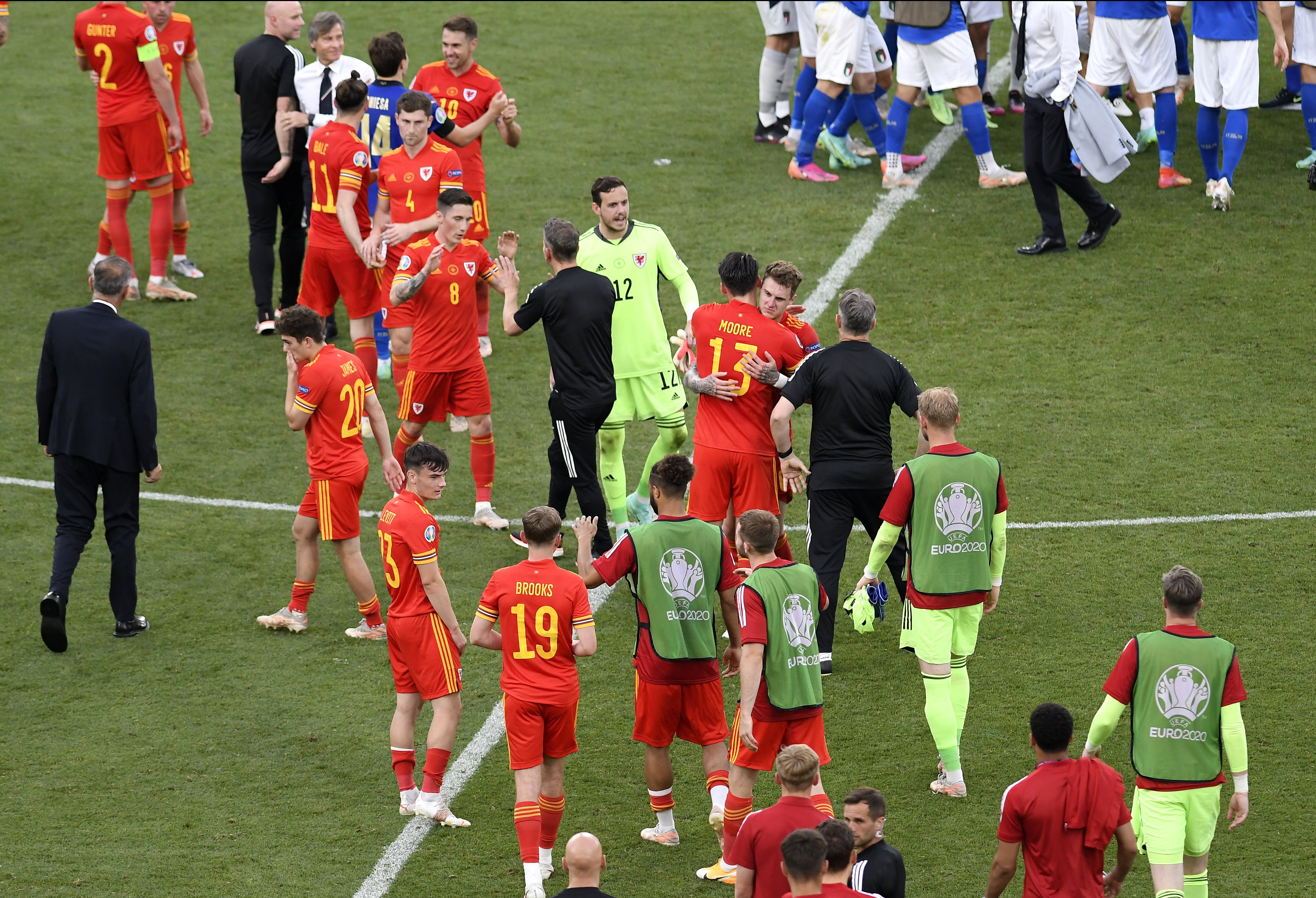 Wales, who reached the semi-finals of the last European Championship in France five years ago, will now play the runners-up of Group B – probably Denmark, Finland or Russia – in Amsterdam on Saturday.

“We knew it was going to be a very difficult game from the start,” Bale told ITV.

“There was a lot of defending, a lot of running and lot of tired bodies out there. I’m proud of the boys.

“We wanted to try and get a result but I guess it made no difference (as) we finished second anyway. 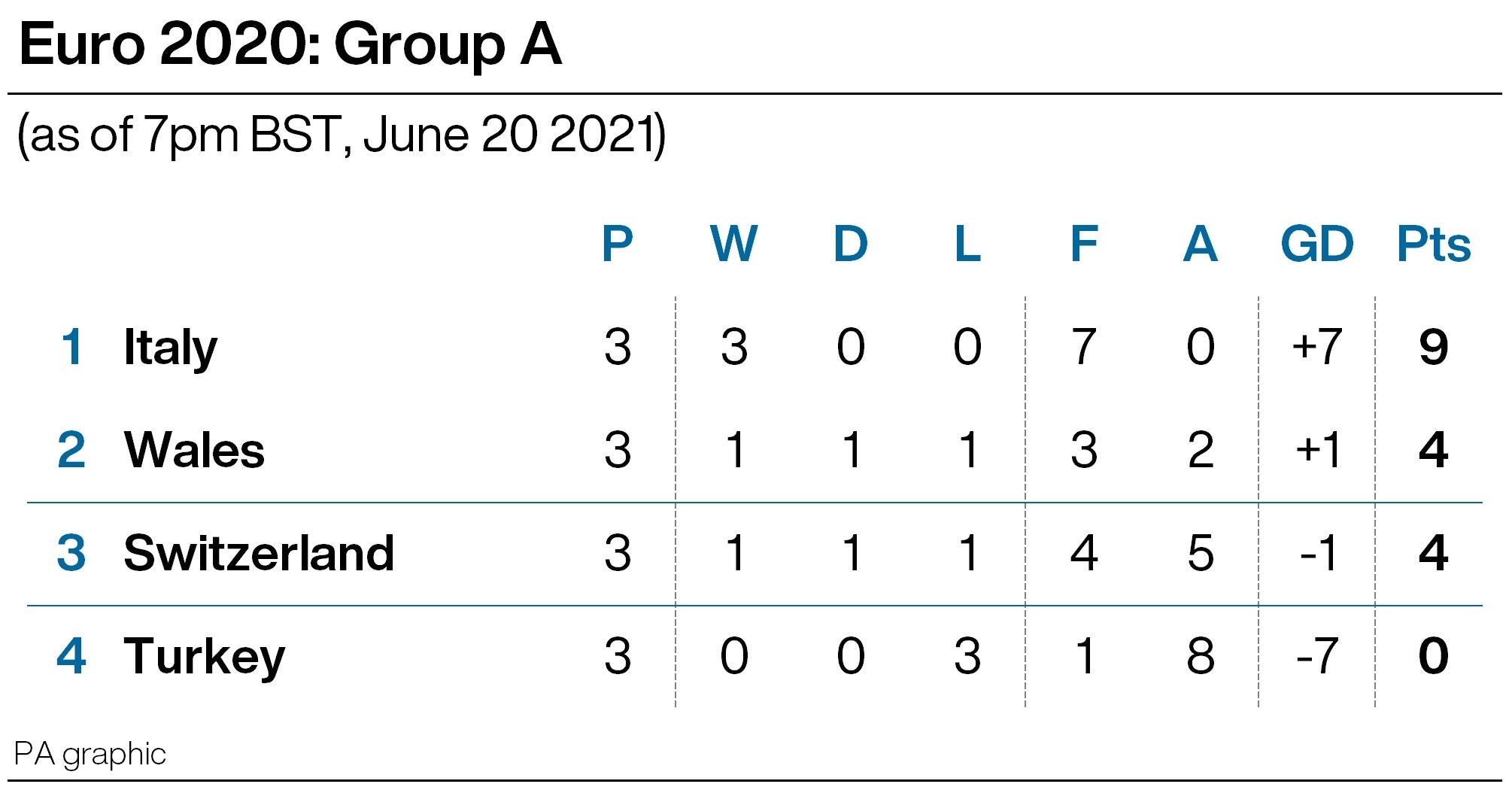 “It (Ampadu red card) was unfortunate but we had to dig deep.

“We had to make sure we didn’t concede as many as possible, but the five-goal swing was there.

“We’ll get a little bit of a break now, patch everyone up, and get going again.”

Switzerland beat Turkey 3-1 in Baku but their goal difference ended up being two worse than Wales.

There was a lot of defending, a lot of running and lot of tired bodies out there. I’m proud of the boys

The Swiss must now hope to qualify for the last 16 as one of the four best third-placed sides.

Chelsea defender Ampadu will be suspended for the round of 16 tie and interim Wales boss Robert Page felt the red card was “harsh”.

Page said: “Of course Ethan is disappointed. He’s a young lad and he wants to be part of this major tournament. This will hamper that.

“I haven’t seen it back but I thought it was a harsh decision at the time. I thought it might have been a yellow.

“It’s tough enough with 11 men but having 10 gave us an ever bigger hill to climb.

“I can’t speak highly enough of the boys. They’ve had to dig deep and they’ve got the job done.

“I knew Switzerland were winning 2-0 at half-time, but my full focus was on keeping the lads focused and motivated.

“There were some massive performances out there and the lads thoroughly deserve all the plaudits having got that second spot.”

Italy’s win saw them equal their national record of 30 games unbeaten and the Azzurri will now head to Wembley for a last-16 tie against Austria or Ukraine.

Manager Roberto Mancini said: “We made eight changes but the team played very well and deserved to score more goals.

“But it wasn’t easy to score after it went to 11 against 10 because they just sat deep and defended. It wasn’t easy for us to find space.

“It’s nice for us to go to Wembley, it’s a wonderful arena.

“But this is the start of a whole new competition and of course we’ll need to play very well to go all the way.

“Our hope is to be back at Wembley once more further on in the competition.”