Gareth Southgate savoured sharing an historic night for English football with the nation as England overcame Denmark to reach the final of Euro 2020 – their first international final since 1966.

Three years on from the heartache in the semi-finals of the 2018 World Cup in Moscow, and 25 years on from his infamous missed penalty in the shootout defeat to Germany at Euro 96, it was redemption for Southgate and his players, as more than 60,000 fans generated a frenzied atmosphere seldom seen at the new Wembley.

“I’m so proud of the players,” Southgate said. “It’s an incredible occasion to be a part of, the fans were incredible all night.

“For our country… I’ve not heard the new Wembley like that, ever. To be able to share that with everybody is very special.”

England’s triumph was made all the more impressive by the spirited Denmark side they had to battle so relentlessly to overcome.

Mikkel Damsgaard gave the Danes the dream start with an exquisite opener from a free-kick, as Jordan Pickford was beaten at Euro 2020 for the first time.

England replied by forcing Simon Kjaer to turn the ball into his own net, but Denmark, inspired by goalkeeper Schmeichel, repelled attack after attack and forced extra-time, before Kane finally secure that long-awaited final appearance. 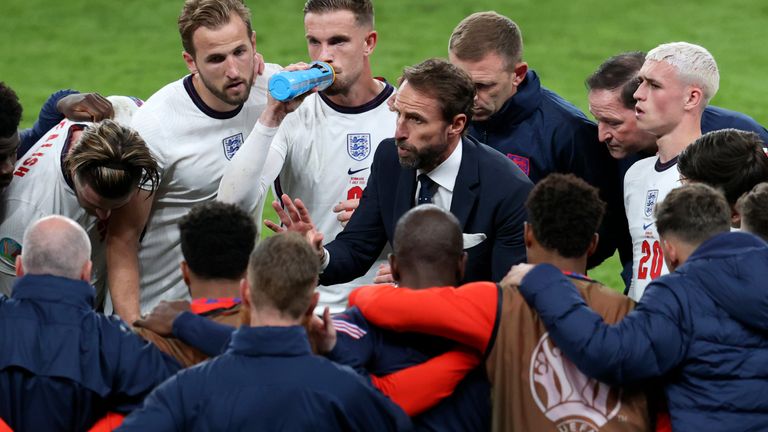 “It was never going to be straightforward, the game the other night in Rome was, but we told the players that they would have to show resilience and come back from some setbacks, and we did that tonight,” Southgate added.

“I felt we would get over the line but knew we would have different sorts of battles. Denmark are so underrated as a team; they did cause us a lot of problems.

“When you have waited as long as we have to get through a semi-final the players – given the limited amount of international experience some of them have – have done an incredible job.

“The most pleasing thing is that we’ve given our fans and nation a fantastic night, and the journey carries on for another four days.

“For the team to come through this sort of a night, we suffered in Moscow on a night like this, we managed to put that right.”

England have little time to bask in the glory of their semi-final victory, with the Three Lions back at Wembley on Sunday, where Italy stand between them and a maiden European crown. Southgate insisted the preparations would begin immediately.

“I think Denmark had only lost four matches out of 30-odd games; Italy’s record is even better than that. They have been a top team for the last couple of years, we’ve followed their progress closely, we know the way they play, with great energy and style.

“They are, as always, difficult to score goals against, and without doubt deserve to be in the final, having beaten two top teams to get there in Belgium and Spain.

“So it’s the biggest possible test we can have. We have a day less to recover but we’ve got to prepare from now. It is wonderful to have the opportunity to take them on.”

Southgate added: “We’re in a final, we’ve got to enjoy that fact, but there is one more massive hurdle to try and conquer.

“Italy are a very good side, they have really shown outstanding form, have defensive warriors at the back, it’s going to be a great game to look forward to. We’ve had three memorable games on the bounce.

“We said we wanted to create memories for our nation, now we’ve got to finish the job. Finals are there to be won, we’ve got to regroup, repair and recover because tonight has taken a lot emotionally and physically.”