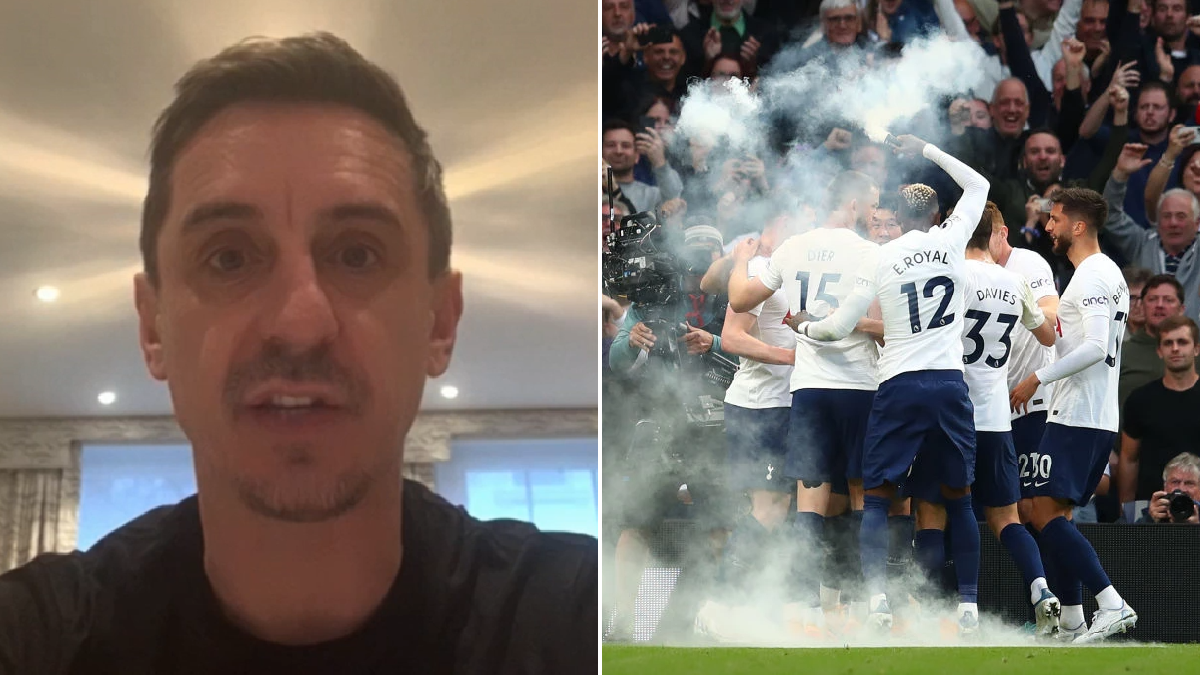 Gary Neville has tipped Tottenham to pip Arsenal to the final Champions League spot after their emphatic Premier League win in the north London derby.

Arsenal travelled to their arch-rivals on Thursday night knowing a victory would have secured a top-four spot and ensured they finish above Spurs for the first time in six years.

But Tottenham sealed a 3-0 win thanks to Harry Kane’s first-half brace and Son Heung-min’s second-half goal to keep their own Champions League aspirations alive.

Antonio Conte’s side are now just a point behind fourth-placed Arsenal and will be expected to win their last two games as they face struggling Burnley on Sunday and already-relegated Norwich City on the final day.

A top-four spot is still in Arsenal’s hands but they face a tricky trip to Newcastle United on Monday night and host Frank Lampard’s Everton next weekend, with Mikel Arteta’s squad struggling with injuries as the season draws to a close.

‘Newcastle away [for Arsenal] on Monday Night Football, that’s going to be really tough, especially if Spurs have won on the Sunday.

‘Everton at home on the last day, if Everton need points, then they’ve got two really tough games.

‘I think Tottenham will beat Burnley and Arsenal will have to win their last two matches. But I’m not sure they will.

‘Tonight was a really big blow – I might be wrong and I’m neutral between these two clubs – but I do feel now if I had to put money on it, it would be on Tottenham.’

Neville believes Arsenal ‘wilted’ in the north London derby as they missed the chance to secure Champions League football with two games to spare.

Kane scored a brace either side of Rob Holding’s first-half red card and Son put the game to bed shortly after half-time on a torrid evening for the Gunners.

Ex-England defender Neville added: ‘After 1-0, this crowd were all over the place – it was mayhem after the first goal. At that point, Arsenal did wilt. They capitulated in that part of the game.

‘Once you create that carnival atmosphere in a ground like this, and I think calling it a hostile and fierce atmosphere is fair, it was testing tonight.

‘I always felt like this would be a special game because of what’s on it, why it was cancelled earlier in the season and then what’s at stake.

‘Then you’ve got the way the game was cancelled earlier in the season… It was all a little bit messy. They should have been made to play it, in my opinion.

‘So there was a little bit of needle coming into this game on three fronts… and it being a Thursday night game just adds to it. You don’t ordinarily get that, they’ve usually been Sunday afternoon fixtures.

‘It was red-hot in here in terms of the atmosphere and it got to Arsenal and those young players. They looked mentally weaker in that period of the game from 10 minutes to 35 minutes. It just got to them. It can happen.’

Coronavirus: Sunderland place some non-playing staff on furlough due to financial pressure of pandemic