Arsenal captain Pierre-Emerick Aubameyang has a better minutes per goal ratio than Ruud van Nistelrooy had in the Premier League – a statistic that astonishes Manchester United legend Gary Neville. No top-flight player has scored more than the 49 league goals Aubameyang has since he joined Arsenal from Borussia Dortmund in January 2018. The Gabon star netted twice in the 3-2 win over Everton at the Emirates on Sunday.

Aubameyang now averages a goal ever 123 minutes in the Premier League, the fourth best in the competition’s history.

And Neville says that stat proves why Aubameyang must be considered as world class.

“You talk about Arsenal lacking characters and lacking leadership – I think this guy’s everything you would want,” Neville said on Monday Night Football.

JUST IN: Man Utd signed a star in Fernandes, Arteta papering over the cracks at Arsenal, VAR mess 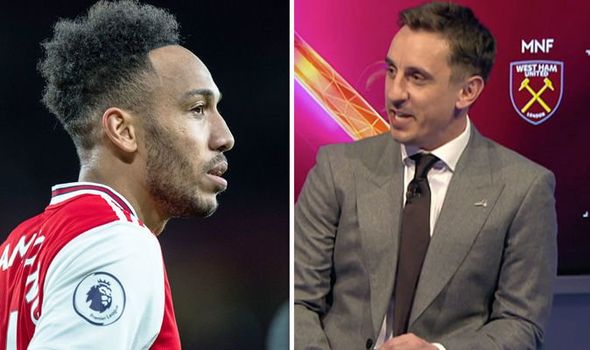 “If you look at his minutes per goal, he’s one minute behind Thierry Henry.

“Now Henry played over a longer period of time, he’s ahead of [Mohamed] Salah, Van Nistelrooy.

“Ruud van Nistelrooy at Manchester United, it felt like he scored a goal every 10 seconds – Aubameyang’s scoring a goal ahead in minutes per goal than Van Nistelrooy.

“It’s unbelievable this performance from this lad over two-and-a-half years.

“He’s not mentioned as world class, we don’t mention him as a Premier League great, and I think we have to.”

Aubameyang is out of contract at the end of next season but Arsenal head coach Mikel Arteta is hopeful he will extend his stay at the Emirates. 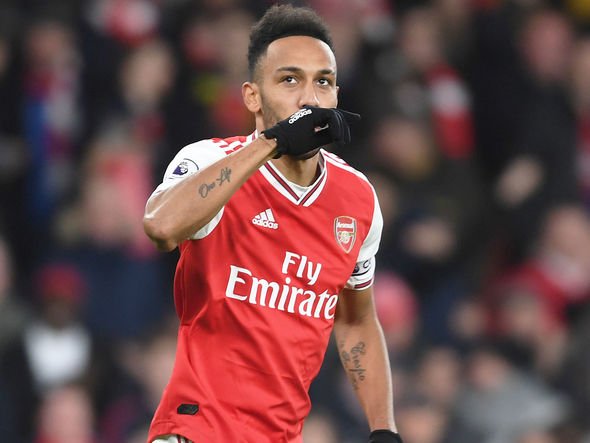 “The [clubs who want him] are completely right because he is a superb player,” said Arteta.

“He completely deserves to be liked by all the other teams. Hopefully we can convince him that this is the right place for him and that he has a future here.

“Hopefully [the wins will help] but as well what we are trying to do. Does he really enjoy walking out onto the pitch every time he goes?

“It’s very much part of what we are trying to build here and I think he is with that mindset at the moment.

“I think it’s been tough for a player like him, because there’s been a lot of disappointment in the last few months or years because he has big expectations and he wants to play for the biggest clubs in the biggest tournaments.

“He wants to be up there with the best players in the world, and we have to try and support him and give him everything as a club, so that he really feels fulfilled here. That’s the challenge that we have.”