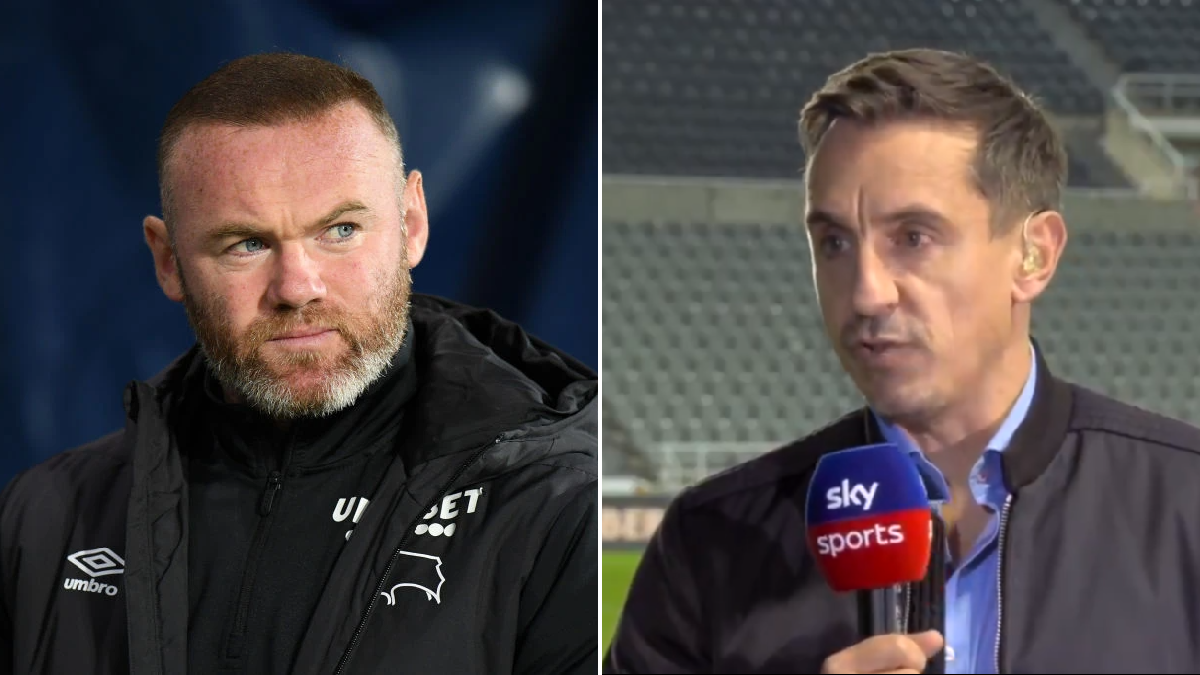 Championship club Derby, who are managed by Neville’s former teammate Wayne Rooney, have been unable to find a buyer despite being in talks with a number of ‘credible parties’.

As a result, they say they have ‘no choice’ but to appoint administrators to protect the club, which has been badly effected by the coronavirus pandemic.

‘We cannot stress enough how devastating it is to be forced into this position,’ the Derby board said in a statement. ‘This season, Covid-19 has continued to have a negative effect on revenues.

‘Unlike other sectors, football has been able to only marginally reduce its cost base with the majority of outgoings being associated with playing staff who obviously could not be furloughed.’

Reacting to the regrettable situation at Derby, Neville told Sky Sports: ‘The biggest news tonight is that a club like Derby County have gone into administration.

‘It’s devastating, it’s another blow. We’ve got to stop this happening. When owners come into football clubs, they has to be an obligation to cover what they sign up to.

‘Until that happens, we’re going to continue to have trouble. We’ve have Bury, Macclesfield, Derby, Bolton, Wigan. It’s got to stop.

‘I know there’s been a fan-led review, we need to hear from [new culture secretary] Nadine Dorries that she will support the recommendations to put an independent regular in place to stop this from happening.

‘Derby are now in a perilous position. It’s this desperation to be part of the Premier League.

‘Now they may go out of business. That cannot happen to a football club and an institution like Derby.’

Derby County owner Mel Morris has been seeking a buyer for the club since June 2019, but two prospective sales have already fallen through.

The Rams are 16th in the Championship table with seven points from their first seven matches and face Stoke City at Pride Park on Saturday.

Falkirk 0-4 Rangers: Calvin Bassey scores his first for the club