‘There were questions on us today so we’ll go away pleased at picking up three points’: Steven Gerrard delighted as Rangers overcome tough start to the season with victory at Aberdeen but admits ‘no one will get carried away’ over title talk

Steven Gerrard hailed Rangers for dealing with the pre-season pressure as they kicked off the new Scottish Premiership campaign with victory at Aberdeen.

The Ibrox side know they can afford few slip-ups this term as they look to deny bitter rivals Celtic a record breaking 10th straight league crown.

But the Light Blues held their nerve at Pittodrie to get off to a winning start. 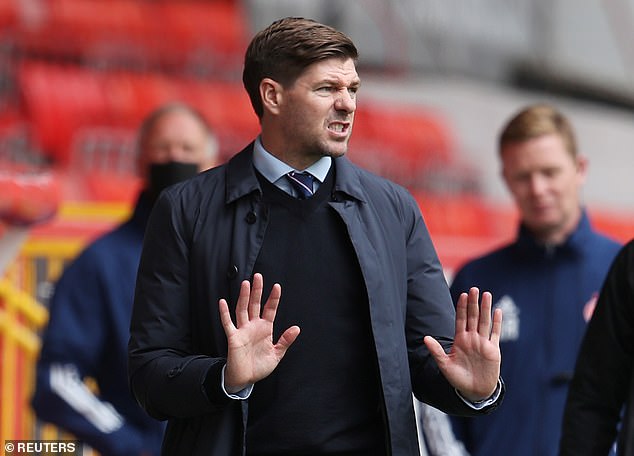 Ryan Kent capitalised on Rangers’ first-half dominance as he streaked away 21 minutes in to score the only goal.

It was a more cagey affair after the break but Rangers refused to blink and ground out victory against a Dons side reduced to 10 late on when Andy Considine was dismissed for a crude lunge on Scott Arfield.

A delighted Gerrard, whose side now turn their attention to Thursday’s Europa League return clash with Bayer Leverkusen, said: ‘It’s a marker for us because all eyes were on us today in the first game.

‘When the fixtures came out, everyone was saying, “Oh, it’s Aberdeen away, will they drop points?”” 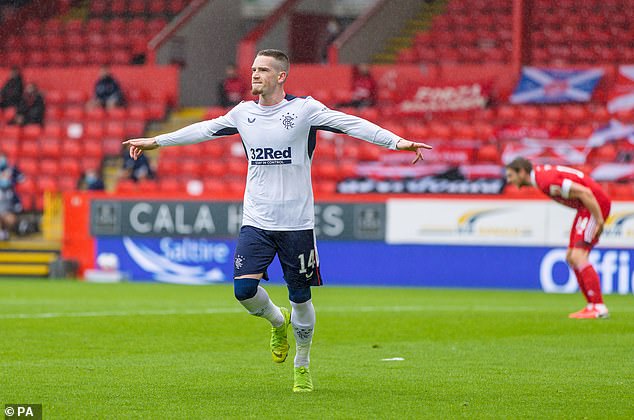 ‘There were questions on us today so we’ll go away pleased at picking up three points and getting a clean sheet.

‘But no one will get carried away.

‘Aberdeen ran us all the way to the end and we’ll dust ourselves down for Europe. But we have to build on this now.’

Alfredo Morelos was trusted to start despite the Colombian’s rumoured interest in a move to Lille.

But he played a big part in Rangers’ win as he slotted through Kent for the winner.

However, with his only other striker Jermain Defoe still out injured, Gerrard knows his side need reinforcements quickly – even if Morelos stays. 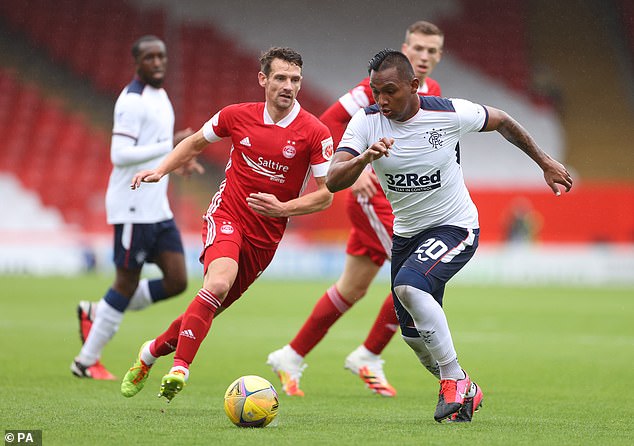 The Ibrox boss, who ruled out a move for Young Boys star Jean-Pierre Nsame, added: ‘I thought in the main Alfredo did a good job for us. He dropped in, overloaded the midfield area for us and listened to instructions.

‘But we want him fitter and sharper. He had a couple of chances that, with more game time, he might have got on the end of and killed the game off for us.

‘But it’s important Alfredo stays focused on Rangers and playing well. The Rangers fans deserve that focus – whatever happens will happen.

‘We’re close on a couple of things that are brewing away but Nsame isn’t a name we should be linked with.

‘There are many other names out there but I can’t control that.

‘We can’t go much longer with just one fit forward. I want one in yesterday.

‘I’ve got massive hopes for Ryan Kent. He has to get more numbers in his game with assists and goals. 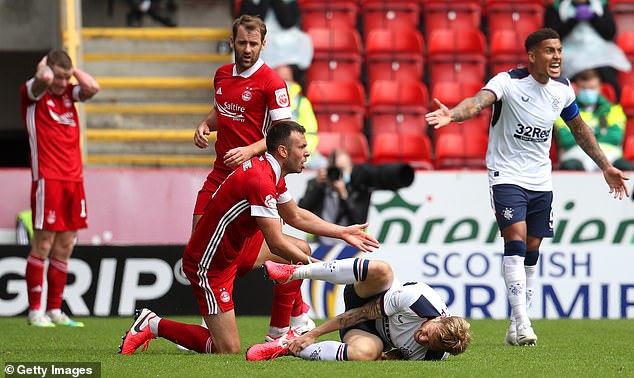 ‘But he was outstanding today, he looked really dangerous and put a shift in for the team.’

Dons boss Derek McInnes was left frustrated with the defeat but absolved his defence of blame for allowing Kent to race through to score – insisting the fault lay further forward.

He explained: ‘People will look at my centre-backs but I don’t blame them at all.

‘The press has to come further up the pitch, when James Tavernier gets the ball he must be shown down the line. We allowed that pass to come inside and as soon as that happens you are susceptible to what happened.

‘If we press right, our centre-backs are expecting the ball down the channel and we would have dealt with that and not lost that goal.’

'The most humble of men': Vincent Tan pays tribute to Whittingham