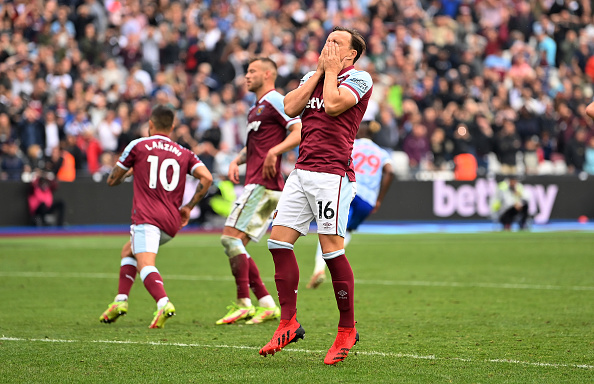 Graeme Souness was less than impressed with the decision for substitute Mark Noble to take a penalty, which he missed, in West Ham’s 2-1 defeat to Manchester United at the London Stadium on Sunday.

With the game in injury time, the Hammers were awarded a penalty for a handball by Luke Shaw, and instead of any West Ham players stepping up to take the spot-kick, Noble came off the bench to do the honours.

The 34-year-old hadn’t even warmed up, and had his effort saved by David de Gea as United came away with all three points in dramatic circumstances.

Earlier in the game, Said Benrahma had put West Ham 1-0 up, before Cristiano Ronaldo’s equaliser. And United got their eventual winner through a Jesse Lingard stunner late on.

But whether it was mostly down to David Moyes, or Noble’s insistence to take the spot-kick, Liverpool legend Souness – who was on punditry duty for Sky Sports – was bemused by the decision.

‘It’s a poor decision, it’s the 94th minute, he’s not been warmed up to come on as a sub so he’s stone cold,’ said Souness.

‘It’s one of two things; the manager said it’s his decision, or Noble has said to the manager, ‘get me on boss, I’ll take it’.

‘Either way, it’s the wrong decision. You wouldn’t do that, he’s stone cold, it doesn’t matter if he scores every penalty he takes in training and every penalty before today.

‘You don’t bring someone on who’s stone cold, has been sitting and watching the game for 90 minutes to take a penalty in that situation. It’s wrong!’