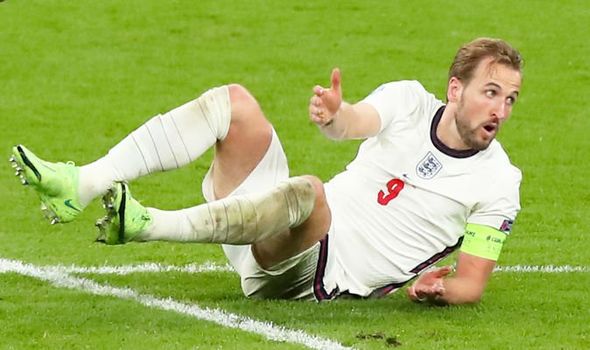 Harry Kane will reportedly sit out of the Tottenham vs Manchester City clash on the opening weekend of the new Premier League season – regardless of which club he is playing for. Kane is currently away following his excursions at Euro 2020, where his England side lost to Italy in the final. The striker will be working on his fitness when Spurs are set to host defending champions City on August 15.

Kane remained fit for the majority of last season, making 49 appearances in all competitions.

He headed straight for international duty and started every match for Gareth Southgate at Euro 2020.

And the Telegraph says he is now set to be given extra time to return to full match fitness and will miss the start of the upcoming season.

Kane still wants to leave Spurs after telling the club earlier this year he wanted to move elsewhere.

City are the favourites to sign the England captain, who turns 28 next week.

Reports say City had a bid of £100million turned down for Kane earlier in the summer window.

Tottenham chairman Daniel Levy is maintaining Kane is not for sale, with the forward still having three years remaining on his Spurs contract.

But Kane wants to win silverware and believes City is the best place to do that.

City are in the market for a striker following the departure of the club’s all-time top goalscorer Sergio Aguero.

Kane is City’s priority, with Erling Haaland seemingly harder to get out of Borussia Dortmund.