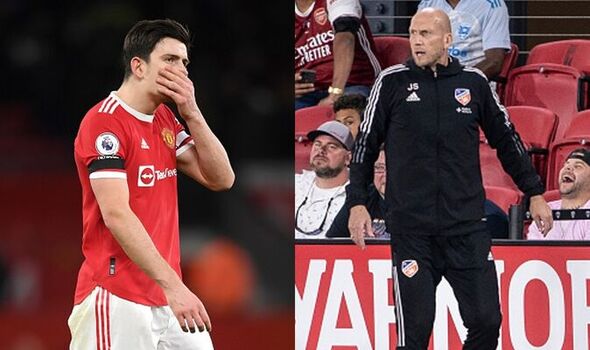 Harry Maguire has been defended by former Manchester United star Jaap Stam, who insists the defender is an “easy target” for fans. Maguire was booed during England’s friendly against Ivory Coast having underwhelmed at club level this season.

Dutch legend Jaap Stam has played down Maguire’s struggles for United, insisting that all players make mistakes on the pitch. Criticism of Maguire came to a head on Tuesday with the centre-back roundly booed by sections of England supporters, though Gareth Southgate called it “an absolute joke”, while several of his international team-mates condemned fans.

Maguire has been linked with a move away from Old Trafford this summer due to his struggles, though he continues to excel in an England shirt. The 29-year-old is expected to be an important part of Southgate’s plans for the World Cup in Qatar later this year, regardless of his form for United.

And Champions League-winning defender Stam played down Maguire’s recent errors, claiming he also made bad decisions during his playing career.

JUST IN: Ten Hag wants Dutch support at Man Utd if he takes over from Rangnick

Speaking to bettingexpert, he said: “He’s (Harry Maguire) an easy target because it’s easy to say that he is making mistakes or wrong choices. Everybody, even when I played, I made mistakes, I made wrong choices as well.”

Stam also called on Maguire’s team-mates to offer him more support as he looks to regain some form and confidence. He added: “I think for him, and that’s what I meant, by what I said before, he also needs to have help from his teammates.

“He also needs to have the confidence of people around him and they will have for him. But also from outside as well, so he can make these steps. “I’ve seen him play before as well when he was at Leicester, and he played good games.”

“Yeah, sometimes now, when you see him play, he doesn’t look confident at times or not making the right decision. But that’s also part of a player and his career path. Sometimes you get ups and downs, you play well, and then you go down a little bit. But it’s about how you pick yourself up to become a steady player.”

Maguire wil be back in action on Saturday when United take on Leicester in a 5:30pm kick off.