The glory days are back. That’s how it feels, at least, now that Guus Hiddink is on Aussie soil again to help celebrate the Socceroos’ 100-year anniversary, and help his former lieutenant Graham Arnold prepare for the team’s final matches before the World Cup.

There’s serious business for the pair attend to ahead of Thursday night’s clash with New Zealand at Suncorp Stadium – but first, Hiddink and Arnold had to indulge themselves and their audience at the pre-match press conference by reeling off a few quick stories from their time together at the helm of the Australian national team during its golden era: before and during the famous 2006 World Cup in Germany.

For almost half an hour, they had each other cackling over old tales about the nature of their odd-couple relationship, Arnold’s poor chewing gum etiquette, how Vince Grella once ironed out Chelsea’s Michael Essien in a Premier League game, looked to the bench and gave his old gaffer a thumbs up, and how Hiddink once contemplated but never followed through with a plan against Uruguay to change goalkeepers ahead of their penalty shootout, just as Arnold did in June against Peru to seal their spot in Qatar.

Only hours after his late-night flight touched down in Brisbane, Hiddink met a handful of current players at the team’s hotel on Wednesday morning – as well as two of his former charges, Tim Cahill and Tony Vidmar – and the impact of his sheer presence was immediately felt, according to Arnold.

“There was only half-a-dozen players who walked in this morning for breakfast, and the look on their faces straightaway said enough,” he said.

“Those kids, who are our players now, were probably five, six to 10 years of age in 2006, and they all idolised him.” 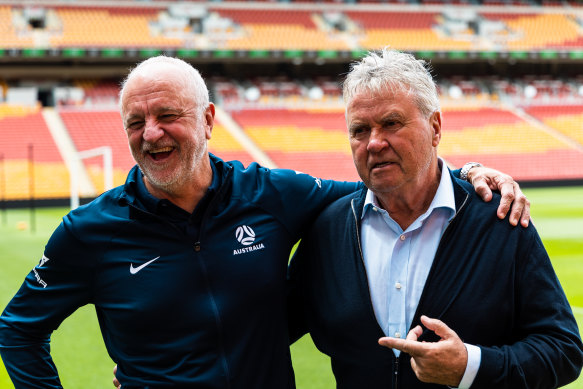 Socceroos coach Graham Arnold and his beloved predecessor Guus Hiddink, who spearheaded Australia’s famous 2006 run to the round of 16.

Hiddink has long admired the strong mentality of Australian players, and suggested that nothing had changed on that front with the new breed. He will get a better chance to get to know them over the coming days on the training pitch and from the bench as he serves as Arnold’s assistant in place of Rene Meulensteen – who is in Europe scouting the Socceroos’ World Cup opponents – for Thursday’s friendly and Sunday’s rematch in Auckland.

“Very open-minded,” Hiddink said. “They come to you. They’re not shy and that’s what I like very much. I’m curious to talk to Arnie in the upcoming hours and see how they act in the two games. They seem to be very fit and fresh – fit in the physical and freshness in their mind. There’s no doubt with Australians, they are always fresh in their mind.

“I’m asked many times … what was some highlights in your career? Everyone wants to push me a bit to Chelsea or [Real] Madrid or PSV … but people, you forget one. My experience with this country, with this team with the staff, was one of my highlights. And that’s why I’m very happy to be back.”

Before Thursday’s match, Football Australia will also unveil a ‘team of the century’, which is certain to be dominated by players from Hiddink and Arnold’s 2006 crew, who reached the round of 16 before a heartbreaking defeat to eventual champions Italy. 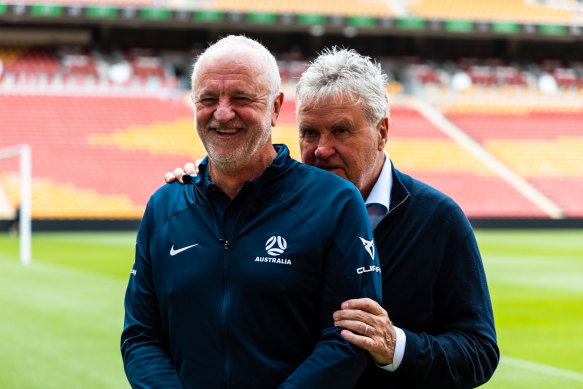 Hiddink is standing in for Arnold’s regular assistant Rene Meulensteen, who will spend this international break scouting Australia’s World Cup opponents in Europe.

But just as Tony Soprano once remarked that ‘remember when’ was the lowest form of conversation, Hiddink and Arnold were keen to make it clear that the time for banter and reflections would end at the end of the presser.

“The most important thing is that the mentality of the players is right, they don’t see it as a party. Guus will drive some strong messages to the players, today and tonight, about what he’s achieved, and what it takes to achieve success at a World Cup,” Arnold said.

Hiddink added: “That’s why I was emphasising not to go back in the romantic time and appear that things were good, because you have to work for that. That’s why I like to tell some stories from the past, but I hope and there is always a relation to the present. That’s why I think, what I can help for the few days I’m here, I’m glad to do so.”

Arnold has some tough decisions to make in the coming weeks as he settles on his 26-man squad, having called up 31 players for this window. Some are yet to arrive in the country – and some won’t even make it across the ditch, with the coach flagging that he would spare 10 or 11 players from the trip to New Zealand.

“Those players will be upset because their mentality [is] they want to play both games to take two chances,” he said. “But if we just look at one player for each position, and that player gets injured or something the week before, I won’t have a plan B – so this is more about the plan B and making sure we’ve got those players ready.”