Chelsea boss Frank Lampard is looking to add to his squad this summer having failed to sign a player in the January window. The Blues opted against signing reinforcements then but are now on the verge of signing Timo Werner from RB Leipzig.

Werner has continued to show his goal scoring talents this season and so far he has found the back of the net 31 times in just 40 appearances in all competitions.

However, while Lampard will have the obvious option to play the 24-year-old as a No.9 next season, the German international is also adept at playing in other positions.

Werner’s main position is as a centre-forward, but he is accomplished at playing on the left-wing and as a second striker too.

JUST IN: Timo Werner agrees to shock Chelsea transfer as Liverpool braced to miss out on top target 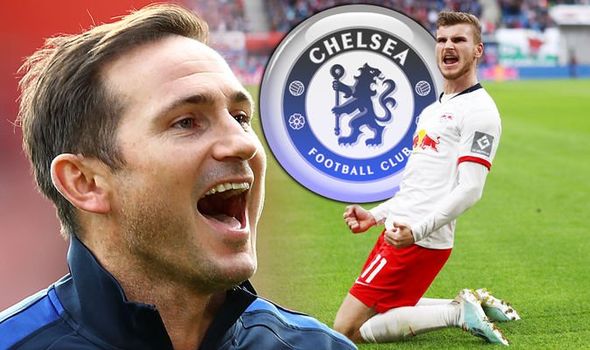 According to transfer expert Nicolo Schira, the Blues offered him a five-year deal, with wages of £9m (€10m) a season plus bonuses.

“Timo Werner is getting closer to Chelsea,” Schira tweeted.

“Blues will pay his clause. Liverpool had offered the same salary to German striker in the last weeks, but asked a discount to Leipzig, that rejected.”

If Werner seals a move to Stamford Bridge it will put a lot of pressure on youngster Tammy Abraham.

The 22-year-old is also having a great season and has scored 15 goals in 34 appearances in all competitions.

Lampard hasn’t been afraid to mix up his formations this season but may end up favouring a 4-2-3-1 rather than a 4-3-3.

The three attacking midfielder positions in this setup could allow Lampard to include Werner behind Abraham, while also accommodating the likes of Callum Hudson-Odoi, Mason Mount, Christian Pulisic, Ross Barkley and new signing Hakim Ziyech.

However, with Chelsea spending big to back Lampard with more firepower this summer, Werner isn’t likely to be sitting on the bench next season. 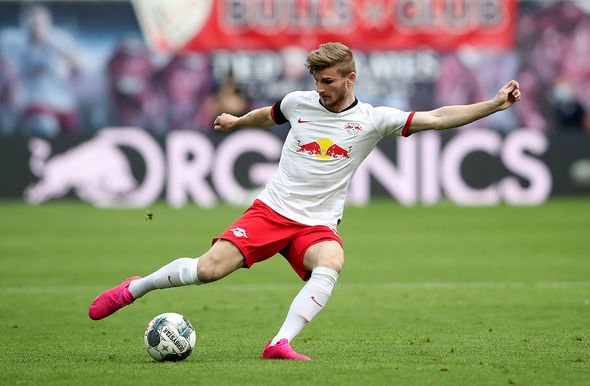 According to the Independent, Werner was sold by Lampard’s vision of rebuilding the club, which he will be a core part of.

However, Werner isn’t the only big signing Lampard is hoping to seal this summer, as Leicester City star Ben Chilwell is also a transfer target.

Lampard hasn’t settled on a first-choice left-back this season, with Emerson Palmieri and Marcos Alonso both given opportunities this campaign.

According to the Mirror, Chilwell is tempted by a summer move to Chelsea.

But the Blues could end up having to pay a world-record fee to prise the England international away from the King Power Stadium.

If Chelsea are successful with both signings, Lampard would likely see Werner lead the attacking line.

Hudson-Odoi would then play on left, with Ziyech on the right flank and Mount playing as a number 10.

Jorginho and Mateo Kovacic would probably be his two preferred deep-lying midfielders, although Billy Gilmour’s form could see this change.

Lampard would then have a centre-back pairing of Antonio Rudiger and Cesar Azpilicueta, with Reece James as his right-back, Chilwell on the left and Kepa Arrizabalaga in goal.