REVEALED: How Georgia Stanway went from the shadows to the limelight for England… the former Man City star was not a starter for Sarina Wiegman until the eve of Euro 2022

There was a time when England’s quarter-final star Georgia Stanway’s versatility worked against her.

An injury crisis at Manchester City saw the attacking midfielder shifted to right back for the best part of three months.

She also played a game at left back and there was even one match where she was listed as the reserve goalkeeper, such was her willingness to do a job for her team. 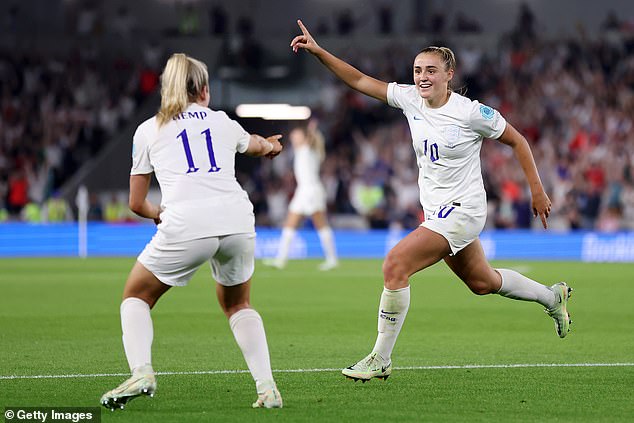 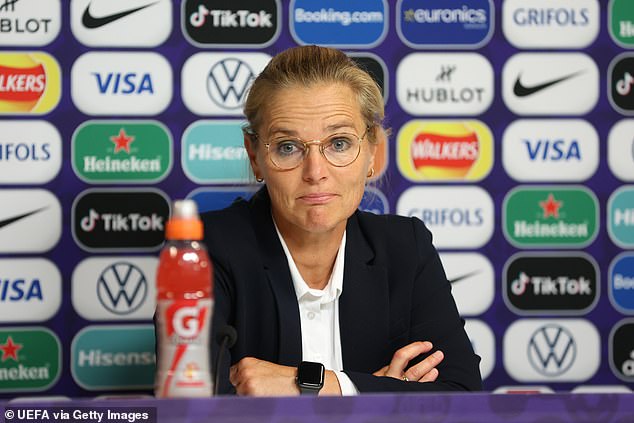 But those months out of position affected her game time for England. After starting Sarina Wiegman’s first match last September, Stanway was left on the bench for the next four games.

It looked for a long while that she would struggle to force her way into the starting XI for the Euros.

But a strong end to the season, back in her preferred attacking midfield role, saw her move up the pecking order and she started six of the last eight games before the curtain-raiser against Austria.

But a question mark remained over whether she would be starting that opening game at Old Trafford.

Stanway was expected to be competing with Ella Toone but Fran Kirby’s return to fitness added extra competition and Wiegman had favoured the Chelsea forward in the No 10 role before her spell on the sidelines.

There is a good chance Stanway would have been left on the bench for that Austria game had it not been for a last-minute change of heart from the England boss. 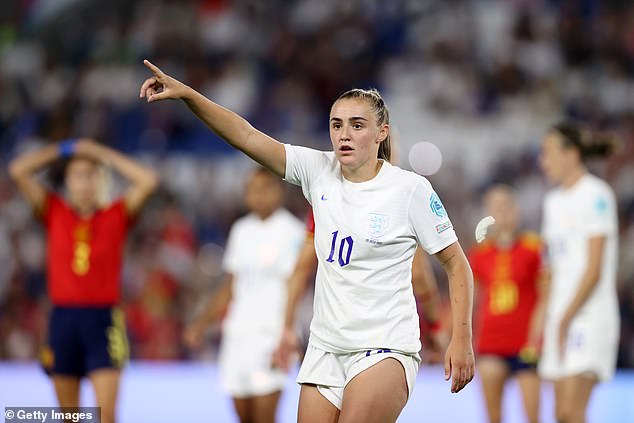 Wiegman’s preference had been to play Leah Williamson alongside Keira Walsh in midfield until the final warm-up against Switzerland.

Williamson hinted she was more comfortable in defence, where she plays for Arsenal, so Wiegman moved her captain back, leaving a space alongside Walsh.

This time, Stanway’s versatility worked in her favour. She was the logical choice to slot into the deeper midfield role and she has performed excellently — tasked with breaking up play and allowing Walsh to spray the ball around between defence and attack.

It can often be a thankless job, but since her player-of-the-match display against Austria, she has not looked back.

Stanway is still just 23 years old, but is showing maturity beyond her years.

On Wednesday, she came of age with another impressive display and a match-winning goal to send the Lionesses through to the semi-final.

There is no doubt she has grown as both a player and a person under Wiegman’s guidance.

One of the criticisms of Stanway before the Euros was her tendency to fly into tackles recklessly. She was sent off for a rash challenge in the Manchester derby last season and was shamefully targeted by abusive trolls on social media. 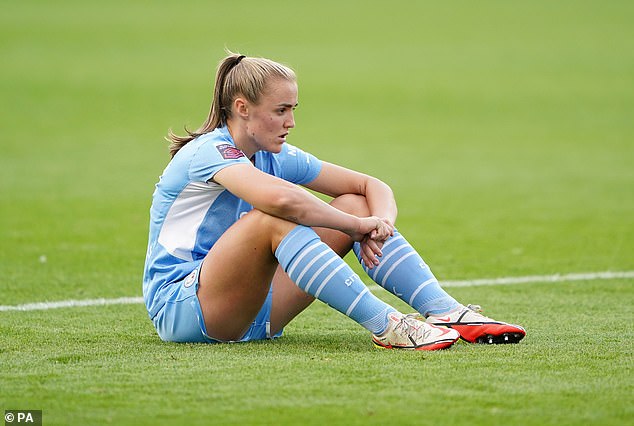 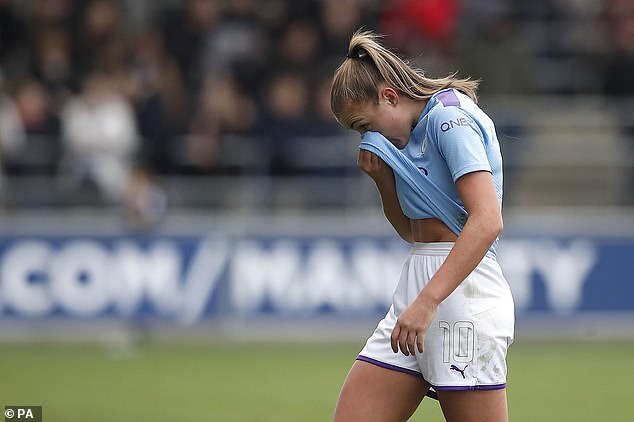 ‘Everyone who knows me knows I’m passionate and competitive,’ Stanway said back in October.

‘There was absolutely no malice intended. I made a mistake and hope everyone can accept my apology but I shouldn’t have to log into social media and find myself subjected to all sorts of abusive messages.’

Stanway’s aggression has often been mistaken for malice, which is not the case. She is not that type of player, she is just eager to win the ball back.

It was a problem Steven Gerrard had in his younger days before he mastered the art of channeling aggression, something Stanway is now beginning to do, too.

She got in Spain’s faces on Wednesday night and disrupted their possession with niggly fouls. Spain had their own argy-bargy tactics, but Stanway did it better. 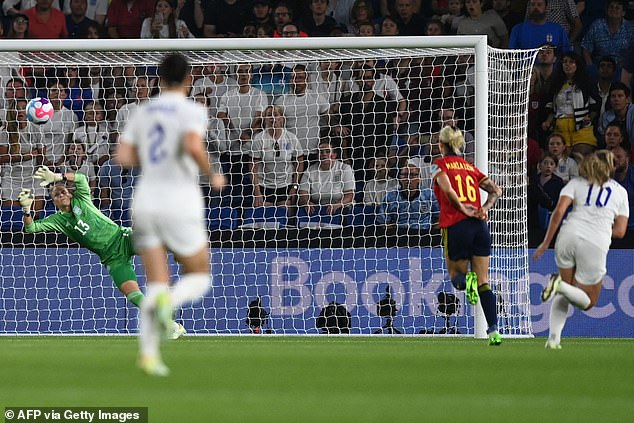 Explaining the role she was given in the quarter-final, Stanway said: ‘Just the grit, the dirty work, getting up to the ball, putting the tackles in, making sure to challenge their decision-making and making them uncomfortable.’

But she is also a gifted technical player and, as we saw on Wednesday, capable of scoring from anywhere and everywhere.

She left City as their all-time leading goalscorer after sealing a move to Bayern Munich in June.

‘Georgia Stanway Ballaaaaa,’ England and West Ham midfielder Declan Rice tweeted on Wednesday night. Rice, who played a similar role to Stanway at last year’s Euros — albeit without a spectacular goal — has been one of many Three Lions players to get in touch with Wiegman’s squad. 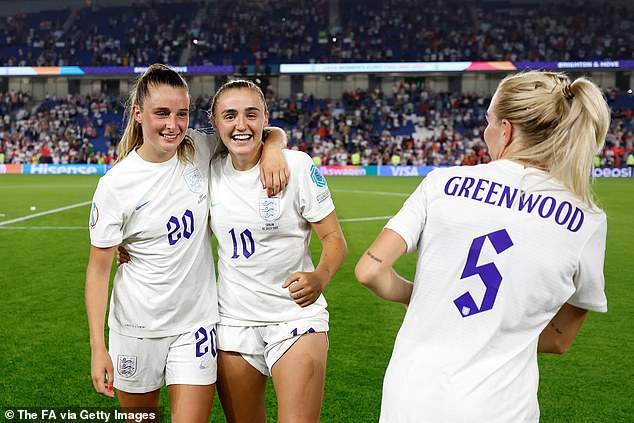 ‘We got a few messages off the men as well, just supporting us, willing us all the way, saying they’re coming to the next match,’ Stanway said.

‘We’ve had certain messages off Declan Rice, just the lads who were involved last year. They’re giving us tips on momentum, taking it forward.

‘You get snippets of what’s going on outside and the support. We see it in the stadiums when everybody is up on their feet, everybody is getting involved when we’re on the attack, in defence, everybody is cheering us on.’

Stanway had the Brighton crowd on their feet on Wednesday and there are no doubts over her starting place now. She is the beating heart of England’s midfield and will be key if they are to progress to the final.

Fonseca could be in line for a £6million deal at Newcastle