Manchester United manager Ole Gunnar Solskjaer’s charm offensive swayed Donny van de Beek into moving to Old Trafford, according to reports. The Norwegian is poised to make the Ajax star his first signing of the transfer window. And that will delight fans who were starting to grow frustrated with their lack of business.

Manchester United have, so far, endured a quiet transfer window.

Fans have had to watch as Chelsea have strengthened, with the Blues already landing Hakim Ziyech, Timo Werner, Ben Chilwell, Thiago Silva and Malang Sarr.

Arsenal and Manchester City have also strengthened their squads as well as Jose Mourinho’s Tottenham, who are eager to secure a return to the Champions League at the first time of asking.

But, on Sunday night, it emerged that United are close to making Van de Beek their first signing of the window.

And the Mirror say Solskjaer’s charm offensive wowed the 23-year-old and convinced him that a move to Old Trafford was the right call.

The 47-year-old’s determination to land the Ajax star was key for the player, who has told team-mates that he’s been flattered by the Norwegian’s approach. 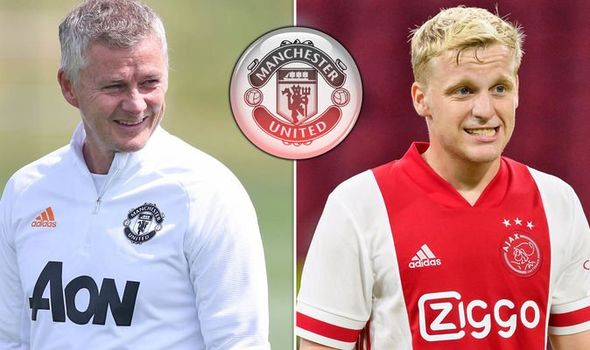 He’s agreed a five-year deal at Old Trafford, with the option of another 12 months.

And United chief Matt Judge moved in to seal an agreement for Van de Beek after getting wind that Tottenham were eyeing a late bid for the Netherlands international.

Van de Beek was said to be impressed by the vision that Solskjaer laid out for him, too, with the club now back in the Champions League following their third-placed Premier League finish last term.

Initially, the 23-year-old was expected to join Real Madrid.

The Spanish giants have admired the Ajax star for some time but, because of the coronavirus crisis, funds are in short supply at the Bernabeu.

Barcelona have also been linked with the midfielder, who scored 10 goals and registered 11 assists across all competitions for Ajax last season. 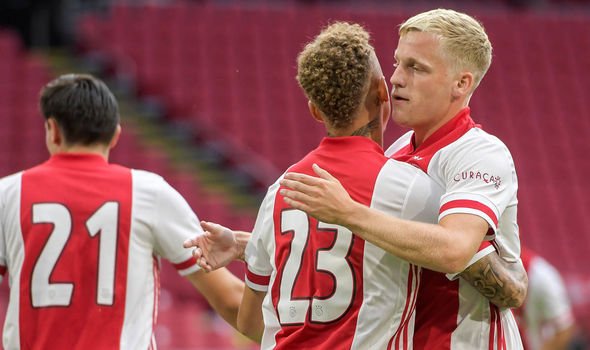 But Ronald Koeman’s side have also missed out and, now, Van de Beek will be wearing United red next term.

Former Tottenham star Raphael van der Vaart is excited about the prospect of seeing the midfielder in the Premier League, saying: “Donny deserves this transfer so much.

“He has played excellent for Ajax.

“And Manchester United really need this kind of player in their team. This transfer is fantastic for us [Dutch people] too. We are all going to follow him now. This move is so deserved.”

Solskjaer had previously expressed a desire to see reinforcements arrive, saying earlier this month: “We still have a way to go to get to the level of the teams at the top of the Premier League. They are too far ahead of us.

“We are still growing, getting better of course, but we are not the finished article. Nowhere near.

“We want to go as far as we possibly can in this tournament. I think we all realise we are in a special moment in history.

“But that will stretch all the squads and it means you need a big squad for next season.

“We are always working towards having a competitive squad and the challenge for us now is to take the next step.

“That means winning trophies and keep trying to close the gap to the top two teams.

“And we have also got to make sure that the teams who finished below us in the table stay behind us.”

Alan Shearer takes the reins at Newcastle 11 years ago today