Report and highlights from the Sky Bet Championship clash between Huddersfield and Birmingham at the John Smith’s Stadium as Fraizer Campbell put the Terriers in front but Marc Roberts earned a draw for the Blues.

Huddersfield and Birmingham shared the spoils in a low-quality 1-1 draw between the two Sky Bet Championship strugglers.

Fraizer Campbell’s fine finish was cancelled out by Marc Roberts’ tap-in as both sides gained a welcome point in their respective battles to stay up.

The flow in the early stages was heavily affected after an aerial collision between Huddersfield’s Richard Stearman and City’s Harlee Dean. It left Stearman the worse off of the two and slightly groggy after a few minutes of treatment. 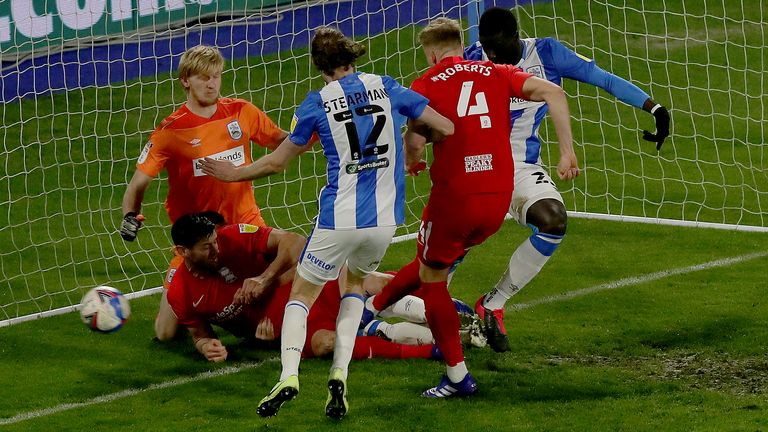 Both sides probed and pushed but neither could fashion a meaningful attempt in the cagey early stages.

The closest either came in the first quarter of the game was through Jeremie Bela’s cross-shot, perhaps an indictment of how little quality there was on show.

The game was starting to liven up with Campbell’s mazy run resulting in a shot being charged down before down the other end Ivan Sanchez suffered the same fate, with Stearman getting in a fine block.

Sanchez was causing Town plenty of problems and after 35 minutes he lashed another effort just over before Pipa fired straight at Neil Etheridge in response.

Isaac Mbenza was presented with a decent chance after a free-kick was awarded on the edge of the Birmingham area. But as was befitting with the entire half, and after a long wait to take it, he proceeded to blaze it well over the bar.

The second half, much like the first, took a while to get going with the visitors’ Alen Halilovic firing in a shot that Ryan Schofield tipped over the bar.

City were enjoying more of the ball upon the restart and Schofield’s gloves were kept warm with a Kristian Pedersen shot that was deflected into his hands just before the hour mark.

Despite the visitors being on top, it was the hosts who went in front after 63 minutes.

Campbell lashed the ball home after a loose clearance fell his way on the edge of the City box.

Birmingham’s response was swift to say the least. A corner was scruffily dealt with by the hosts and it kindly fell to defender Roberts who stabbed home from a few yards out.

The game then reverted to type with both sides struggling to break each other down as the clock wore on.

Not even the introduction of strikers Yaya Sanogo or Scott Hogan could alter the outcome, as both sides had to make do with a point.