Alan Browne hit a rapid-fire double as Preston came from behind to win 2-1 at Huddersfield.

The Terriers went into half-time leading through Frazier Campbell’s first-time finish after eight minutes but they lost their way from that point, with North End taking a firm grip on the rest of the half.

They were deservedly level six minutes into the second half after an impressive turn and finish from Browne, and the Irishman showed his poacher’s instinct two minutes later when he fired into an empty net after a goalkeeping blunder by Ben Hamer.

Huddersfield then played out the last 12 minutes with 10 men after Naby Sarr was sent off for a professional foul on Emil Riis Jakobsen.

It gives Preston their first win at Huddersfield in 28 years. 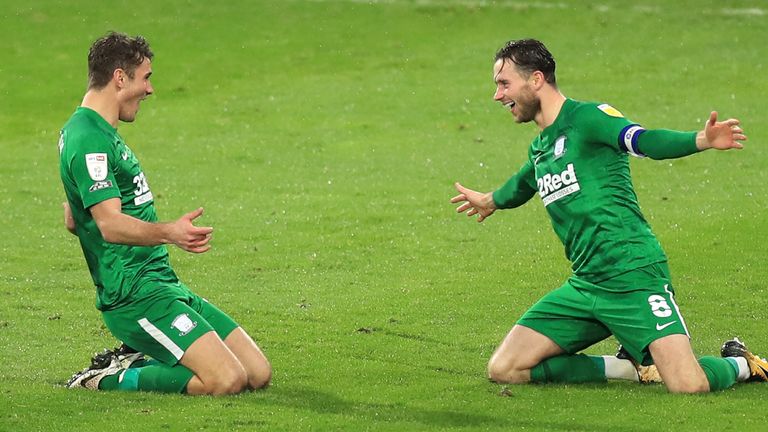 Town started brightest, with goalkeeper Declan Rudd having to smother the ball at Isaac Mbenza’s feet inside the first 90 seconds.

Preston defender Patrick Bauer had a powerful goalbound header accidentally blocked by Jordan Storey after 15 minutes, and Brad Potts fired wide from distance two minutes later with the angle against him.

The midfielder again failed to hit the target from a more central position after 25 minutes as the visitors took charge.

Scott Sinclair snatched a shot wide from 10 yards out when he had time to pick his spot after 32 minutes.

Sarr blocked Riis Jakobsen’s shot at the expense of a corner before Rudd kept out Pipa’s curling shot after 38 minutes.

Potts was perhaps lucky to escape with just a yellow card following a late lunging tackle on Campbell just before half-time.

Mbenza curled a 30 yard free-kick wide two minutes after the restart for Huddersfield but Browne levelled in the 51st minute after he turned inside before curling a beauty into the far corner.

And he doubled their lead two minutes later after hooking the ball back over the keeper after Hamer dropped Joe Rafferty’s cross.

Browne then drilled a long-range shot straight at Hamer after 65 minutes as Preston looked for a killer goal, while Sarr produced a perfect tackle to nick the ball off Potts’ feet after he went through on goal after 65 minutes.

Richard Stearman did likewise seconds later with a goal-saving block to keep out a Riis Jakobsen shot as North End continue to press for a third.

Town’s task was made even harder when they were reduced to 10 men, with Sarr sent off for pulling down Riis Jakobsen when he was through on goal after 78 minutes.

However, the hosts continued to search for an equaliser and Pipa had a shot saved by Rudd before hitting the side-netting with another effort in the closing minutes.