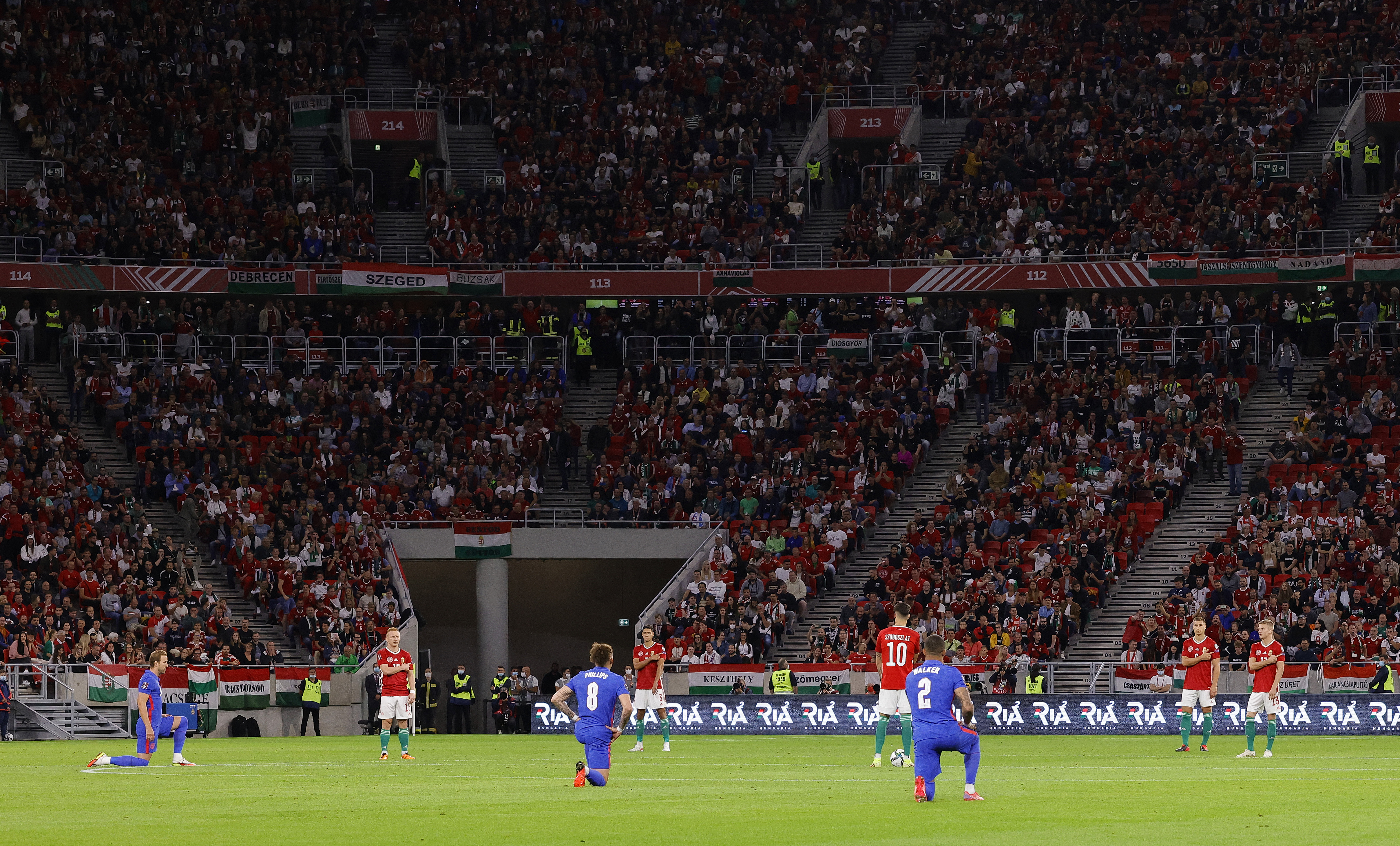 England players were met with boos and jeers from the home crowd at Hungary’s Puskas Arena as they took a knee ahead of the sides’ World Cup qualifying clash this evening.

There was already a hostile and intimidating atmosphere in the build-up to the Group I encounter as the anthems were sung and loud booing could be heard the moment Gareth Southgate’s men took the knee, just moments before kick-off in Budapest.

Talk of such scenes coming to fruition dominated pre-match discussion, with Hungary ordered to play their next three UEFA competition games behind closed doors due to racist abuse and homophobic banners at the stadium during Euro 2020.

However, a full-capacity 60,000 home crowd packed into the stands tonight as the qualifier is being played under FIFA jurisdiction.

Many have called for a blanket ban to be enforced for similar racist and homophobic offences in the future but Southgate took a diplomatic stance ahead of the the qualifier, saying England needed to ‘get it’s own house in order’ before criticising other nations.

It comes after Three Lions trio Bukayo Saka, Jadon Sancho and Marcus Rashford were all targeted with sickening racist abuse online after their penalty misses in the Euro 2020 final.

Some England supporters could also be heard booing Southgate’s squad as they took a knee ahead their Euros opener with Croatia in June.

‘Well it is none of our business really,’ the England head coach told the media earlier this week.

‘We’ve got our own problems, we just took part in a final where we had carnage, really.

Southgate added: ‘I never like it when we look outside when we’ve not got our own house in order.

‘I’m always respectful when I’m travelling away to a foreign country of showing the hosts respect and an understanding that these things can happen, it’s happened in our own country around the final.

‘So, I never like it when we’re always jumping on to what happens abroad when we’ve still got so much ground and distance to make up ourselves.’

Hungary head coach Marco Rossi said he would be ‘on the side’ of England should they be subjected to racist abuse during the qualifier and Sandor Csanyi – president of the FA – implored fans not to make any discriminatory chants in the matchday programme.

He said: ‘It’s important that the team’s unbeaten run so far in this FIFA qualifying campaign is not overshadowed by anything else and that the loud noises produced inside the arena is full of encouragement for our national team rather than containing any racist, discriminatory or homophobic chants, including discrimination against the Roma community.’