More than 20,000 fans will be allowed in to Parramatta’s CommBank Stadium later this month when the Matildas host Brazil in a pair of friendlies.

A day after Socceroos coach Graham Arnold called on the NSW Government to unleash the national team’s ’12th man’ in their own crucial World Cup qualifier against Saudi Arabia, minister for sport Natalie Ward says an exemption was signed on Wednesday night allowing the Matildas crowds to be boosted from 5000 to 22,500.

The matches will take place on Saturday, October 23 and Tuesday, October 26 with 75-per-cent capacity crowds permitted. The stadium’s capacity is 30,000 patrons but under NSW public health orders crowds are capped at 5000.

“We’re all desperate to see Sydney regain its rightful crown as the sporting capital of Australia and I can’t think of a better showcase,” Ward said.

“We’ve all missed the roar of the crowds and I can’t wait to hear the sound of Matildas fans cheering on their heroes.”

The Matildas set their attendance record at the same venue in November 2019, when they beat Chile 2-1 in a friendly. 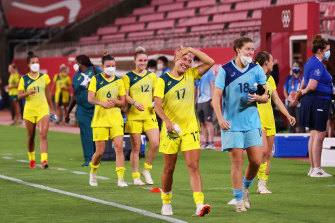 “Today … is another groundbreaking announcement for Australian football following the NSW Government’s approval of our submission to host these matches in Sydney within the 14-day mandatory quarantine period.

“This now means that more NSW-based fans will be able to see their favourite national women’s team … and also paves the way for Sydney to host the Socceroos’ crucial home AFC Asian Qualifier.”

That match is set down for November 11.

Saudi Arabia are the only unbeaten team in Group B of World Cup qualifying, having taken 12 points from four matches, three clear of Australia and six ahead of Oman and Japan.

The Matildas, meanwhile, are expected to land in Sydney this week amid a firestorm following allegations from former national team great Lisa De Vanna, who told News Corp she had been bullied, sexually harassed and ostracised during her 20-year career.