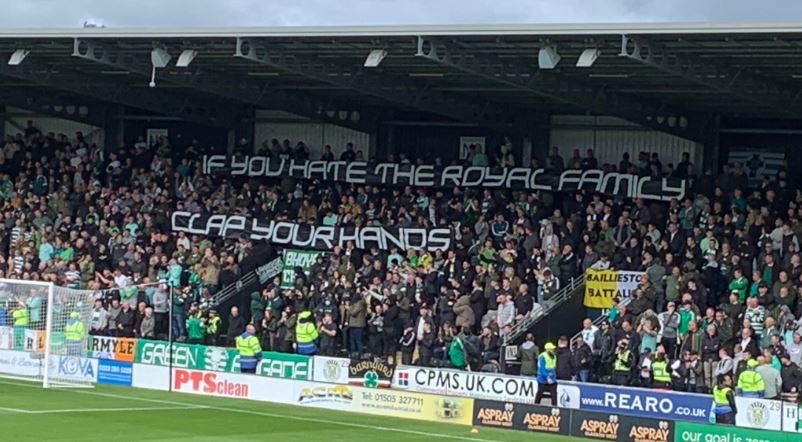 Celtic fans ruined a minute’s applause for the late Queen Elizabeth II by singing ‘If you hate the royal family clap your hands’ on Sunday.

Fans up and down the country have been paying their respects to the British monarch this weekend after she passed away peacefully aged 96, with her funeral set for Monday, although some have decided to protest and make vile chants.

Dundee United supporters could be heard singing ‘Lizzie’s in a box’ before their Scottish Premiership clash against Rangers on Saturday while Irish club Shamrock Rovers hit out at their supporters for the same song earlier this month.

Celtic were charged by UEFA this week for their banners that mocked the Queen’s death – which were unveiled before their Champions League game against Shakhtar Donetsk in Poland – and more banners could be seen in Paisley ahead of their Scottish Premiership game against St Mirren on Sunday.

One banner read ‘If you hate the royal family clap your hands’ as the travelling Celtic supporters sung the same song.

Piers Morgan took to Twitter to label Celtic fans ‘pathetic’ for their actions while Sky Sports commentator Ian Crocker was forced to issue an apology.

‘Apologies if you were offended by anything you might have heard,’ he said. ‘Most people showed respect, some did not.’

Sevilla's Kounde had a 'troubled' summer after failed Chelsea move

Is Sheffield United vs Everton on TV? Kick-off time, channel and how to watch Premier League fixture