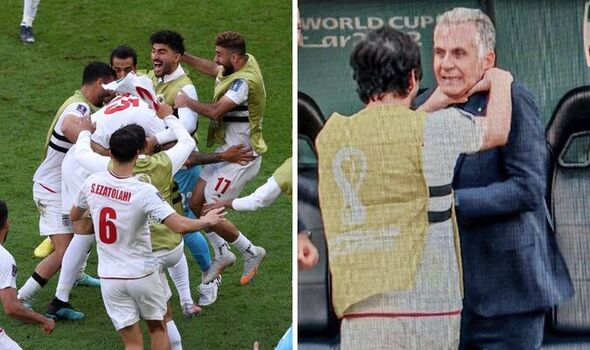 Iran celebrated wildly after their dramatic win over Wales and one player was clearly too excited as he put his hands around Carlos Queiroz’s neck. Wales goalkeeper Wayne Hennessey’s red card late in the match proved to be the turning point in an otherwise uneventful World Cup match.

Iran immediately went on the front foot to find the breakthrough, and it came in emphatic fashion when Rouzbeh Cheshmi fired in a sensational effort from outside the box. Ramin Rezaeian rounded things off for Iran with a delightful chip, sparking wild celebrations from Iran’s bench and players with the three points all sealed.

Queiroz looked in some discomfort, but he wasn’t hurt as he soon joined in after the match. The former Manchester United assistant was lifted aloft by Iran’s players and staff after the match.