Doha: You don’t have to look very far to understand just how much Harry Souttar cherishes the opportunity to play for Australia. Actually, you have to look down, at his abnormally long legs.

The beanpole Socceroos defender has the national coat of arms tattooed on his left calf, along with his cap number 606. Yes, he’s from Aberdeen, and yes, his first visit to the land down under, where his mother was born, only came when he received his first national-team call-up from coach Graham Arnold two years ago.

But much like the other Scottish ‘imports’ in Arnold’s World Cup squad, you can tell he has completely and utterly bought in.

“We know what it means to play for Australia,” said Souttar, who has recovered from his ACL tear just in time to play a vital role in the heart of defence for the Socceroos’ Qatar campaign.

“It’s kind of drummed into us straight away. It’s just about never giving up. When I first came into camp, the lads have got such a great culture. I’ve said before, it feels different when you come into the Australian national team – guys playing all over the world come together and it’s just a click straightaway. I’ve never felt anything like that before.”

Other parts of Souttar’s personal journey are etched permanently across his skin, courtesy of a tattoo artist from Liverpool he visited in the months after suffering the long-term knee injury against Saudi Arabia last year which threatened to rule him out of the World Cup. 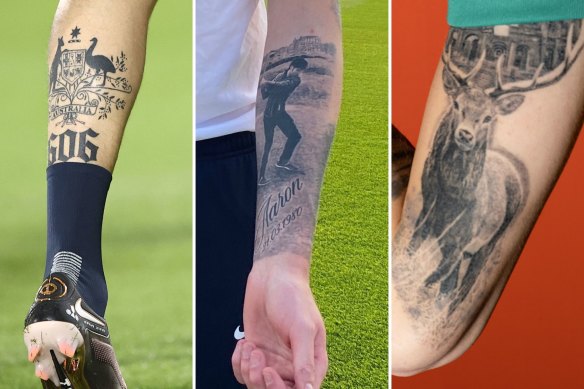 Well, aside from the stag on his arm, which he concedes is “random” and of little sentimental value.

The Stoke City star also has imprinted on him an ultra-realistic likeness of his late brother, Aaron, playing golf at St Andrews. He died earlier this year, aged 42, after a long battle with motor neurone disease.

“My brother passed away three and a half months ago, so I’ve got him on my arm there just to remind me every day what a brilliant person he was,” Souttar said.

Family is clearly everything to the 24-year-old – both of the blood and sporting kind. His other brother, John, a six-time Scottish international who plays for Rangers, has had his promising career blighted by three Achilles tendon injuries which sidelined him for much of the last three years.

“You have your highs and you have your lows. But for me, a big part of the rehab was speaking to my brother … to see what he went through, mine kind of didn’t really seem all that bad,” Souttar said. “He was a great support. And likewise was everyone in the family, teammates, and people back at the club as well.”

John has just undergone surgery again after another recent injury, which may mean he can’t come and wear the No.19 Australian jersey Harry has waiting for him in Doha. Other members of the clan are definitely en route, although as Souttar joked, they are unlikely to be happy about the 11th-hour ban on the sale of beer at World Cup stadiums here.

At least they can watch him play. For a while it looked very dicey for Souttar, who said he never lost faith in his ability to be fit for the biggest moment of his career to date, but nor was there ever a moment along the way where he thought he was a certainty.

He described the process as “gradual”, one of baby steps – starting with short runs, then longer ones, different kinds of ball work, watching his teammates with envy as he rode a stationary bike at Stoke City’s training base, then minutes for their under-23s team, and, finally, a senior comeback for the English Championship club, which had been fielding serious transfer interest from Premier League sides before he went down with injury. 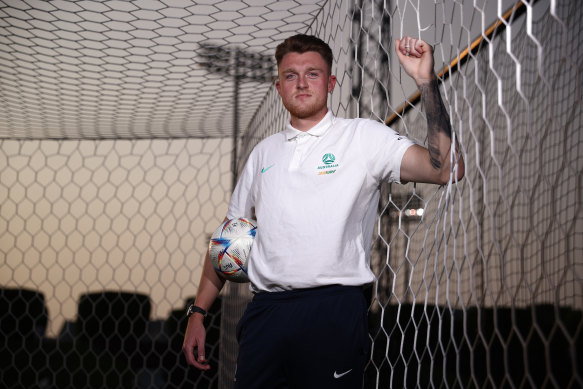 Harry Souttar has scraped in just in time to play at the World Cup after recovering from a long-term knee injury.Credit:Getty

With any luck, some of which his family is clearly due when it comes to football, he’ll be playing at that level soon enough. For now, though, he’s a vital part of the Socceroos’ plans at this World Cup – not just through his defensive prowess but his aerial ability, which may come in handy on Wednesday (AEDT) against a France side which is vulnerable at set pieces.

Souttar has six goals from his 10 caps for Australia, which is a staggering return from a central defender, but not so surprising when you consider he stands at 198 cm tall, and they all came against what he politely described as “smaller height nations” in the early part of Asian qualifying.

France has much bigger bodies to contend with, but he’s eager to measure up.

“Make no bones about it, it’s going to be a really tough challenge. We know they’re a really good team,” he said.

“We know likewise, we’ve got so much faith in ourselves, so much belief that we can go out there and do something. In terms of myself to be ready, fitness-wise I feel great, I feel fine. Mentally I feel really strong as well.

“I don’t want to say too much because the team’s not been selected yet. But obviously, it will be a massive privilege and an honour [to play] and a really proud moment – not just for me, but for my family, my mum especially, and my brother as well.”