“In my head, I was saying ‘tackle Sergi if he takes it off you!”

Ivan Toney is in a jovial mood as he re-lives last week’s 3-1 final day win over Bristol City and for good reason. In any other season, with play-offs secured, it would have been a dead rubber for Brentford; a chance for Thomas Frank to hand some minutes to fringe players or to blood some youngsters.

But this season’s trip to Ashton Gate presented the 25-year-old with his last opportunity to make history, by breaking Glenn Murray’s record of the most Championship goals scored in a season. With just two in the eight games leading up to the finale, it was touch-and-go as to whether he would do it, but with 57 minutes on the clock, he did what he does best and clinically swept home from close range.

“But he left it for me and I tapped it in. You could see what it meant, not just to myself but to all of the boys, they all came over and celebrated. It was a proud moment for me.

“I always believed I would get there because the team keeps creating chances and I think it was going to come to a point where, if I didn’t score against Watford [in the previous game], I probably would have taken throw-ins, corners, goal-kicks to make sure I got on the end of them! 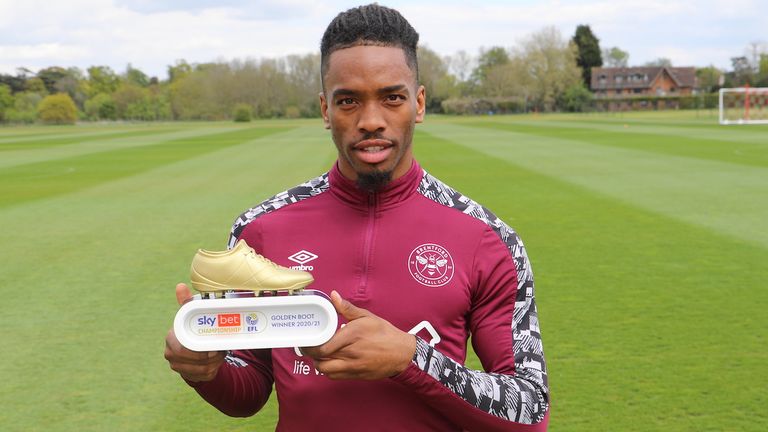 It was a moment that rounded off a near-faultless first Championship campaign for Toney, who added the second tier Golden Boot award to the League One award he won after scoring 24 goals for Peterborough last season.

Given that impact, it is easy to forget that he drew a blank in his first four games in red and white in all competitions, before his first goal in a 1-1 draw with Millwall on September 26.

“Coming to this club, you have to be fit because the way the manager wants everybody playing is on the front foot, pressing, running in behind,” he reflects. “I feel like the first two or three games I was off it, I’m not going to lie – a bit behind the pace.

“There would be chances I wasn’t ready for because I was tired from doing runs before. Now, and throughout the season, I feel like I’m the fittest I have been throughout my whole career and I have just been getting fitter and fitter.

“The coaching staff and everybody here has helped me through that, putting on extra sessions, making sure I’m doing this right, I’m doing that right and it has helped massively, hence the goals. It is a fact of, when the next chance comes your way, are you ready for it? The fitness helps because yes, I’m ready for it and I’ll put it in the back of the goal.”

He also highlights his relationship with head coach Frank as a crucial factor in breaking down early mental barriers.

“The first two games, I missed some easy chances, which normally I would put in the back of the net and I beat myself up about it after the game. The manager would see that and say, ‘We know what you are capable of. Just relax, be yourself and when the next chance comes, take it.’

“I think that helps because if you are not ready for the next chance, nine times of out 10, you aren’t going to score it. I got the penalty against Millwall and from then I never looked back. 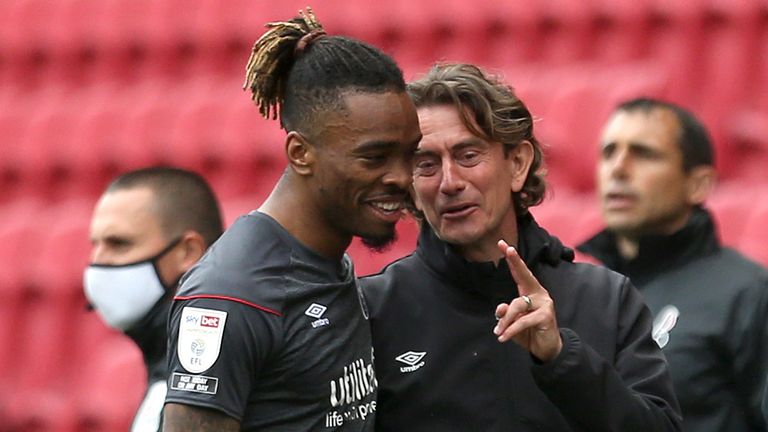 “He has just kept me focused. He is always saying, ‘Be confident, but be humble’ and I feel like I have done that throughout the season. I step across the white line and think I’m going to score today. That’s the confident part, being humble is not bragging about it, not telling anyone, but in your head, knowing you are going to do that.

“He’s like a friend, not just to me, but to others. You see him around and he’s talking to people, asking how their families are. He does genuinely care and it’s good to have a manager like that.”

The 31 goals Toney chalked up throughout the season, naturally, played an integral part in Brentford reaching the Championship play-offs for a second straight season, following their defeat to west London neighbours Fulham at Wembley last August.

On Monday, they travel to the Vitality Stadium to face Bournemouth – who finished with three straight losses, including a 1-0 defeat to the Bees on April 24 – in the semi-final first leg. On paper, Frank’s men have an upper hand of sorts, but Toney knows it will be a game of fine margins once again.

“Everyone knows Bournemouth are a great side,” he continues. “They play wonderful football and have some game-changers, not just on the pitch but off the pitch. They have got players who are capable of playing in the Premier League. It will be a challenge but I think the game will be decided by crucial chances and whoever is more clinical in front of goal. That will be the key over the semi-finals and the final.

“The main thing is to go into the play-offs off the back of some wins and we’ve got four on the bounce, so it gives us a great chance. But whoever turns up on the day and does their job has the strongest chance. We are trying to win every game: the first leg, second leg and the final.

“It’s a challenge we are excited for. We are all like school kids waking up for Christmas, we can’t wait. We just want to get into the games and play them. Nothing will change from our end. We will keep doing what we have been doing and hopefully it is enough to see us over the line.”

But if Brentford fail to reach the Wembley final on May 29, Toney admits the joy of his earlier exploits will become somewhat devalued. “It’s almost a pointless thing if I break the record and we don’t get promoted,” he says.

“It’s good on a personal level, but as a team player, which I am, I want to get promoted and it would be even sweeter breaking the record and getting promoted.”

Fortunately, this is a man who can’t help but suggest it is a case of ‘when’ not ‘if’ Brentford reach the top flight later this month.

“I think it [losing the play-off final] could work on our side,” he concludes. “I feel like other players in the squad have been there, they know the feeling and they don’t want to feel that again, clearly. Knowing how it feels losing at Wembley, nobody will want it again.

“Once we get promoted, I think it will all sink in. I can look back at the season we’ve had and think that was a season where I did my job and it was a good one to look back on.”

Kepa Arrizabalaga faces losing his position as Spain No 1