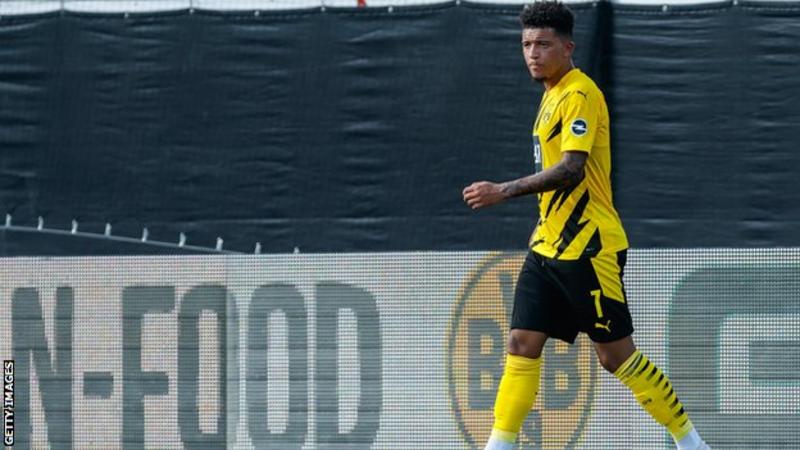 Borussia Dortmund forward Jadon Sancho says his is “really happy” to be sharing a pitch with the club’s younger players and wants to help guide them.

But Dortmund’s sporting director Michael Zorc said on Monday Sancho will stay at the German club next season.

“I love playing with this lot,” said Sancho after starting a pre-season game in Switzerland on Wednesday alongside Jude Bellingham and Gio Reyna, both 17.

“It’s a special bunch. We’ve got some special young players coming up. I’m really happy to share the pitch with them and guide them.

“I joined when I was 17 – some of the lads are the same age. I’ve been there and done that. I can guide them in what’s good and what isn’t. I can hopefully motivate them as well.”

United think Dortmund’s £100m valuation, the player’s salary and the agent’s fee are all too high given the financial impact of the Covid-19 pandemic.

A 10 August deadline the Bundesliga club placed on any deal for Sancho to be agreed passed without any development.

Sancho’s latest comments are consistent with observations from within the Dortmund camp that the forward appears settled and there has been no evidence since they returned to training last week that he is agitating for a move.

Both Dortmund and United will be in pot two for the Champions League group stage draw on 1 October and it could be argued there is very little difference between two clubs who will not be regarded as favourites for their domestic title in 2020-21.

By staying put, Sancho could also benefit from playing in front of fans first, given the push in Germany for crowds to return. The media spotlight on him would also not be as intense there as it would be for any English youngster who scored 17 goals and contributed 16 assists in the Premier League, as Sancho did in the Bundesliga last term.

Whether United boss Ole Gunnar Solskjaer is content at how negotiations are going is open to question.

With the exception of the Europa League game against LASK – when United already led 5-0 after the first leg – Solskjaer has only twice in six matches brought on anyone not seen as part of his first-choice side before the 79th minute.

That statistic does not show the manager has confidence in his back-up players and suggests he feels United’s squad needs much greater depth if they are to close the massive gap to Liverpool and Manchester City.

Patriots RB James White’s father killed in car accident
Recent Posts
This website uses cookies to improve your user experience and to provide you with advertisements that are relevant to your interests. By continuing to browse the site you are agreeing to our use of cookies.Ok