Manchester United may never sign Borussia Dortmund winger Jadon Sancho, according to Sky Sports reporter Dharmesh Sheth. Sancho is United’s top target for the summer transfer window but the Red Devils, as of yet, are not willing to pay Dortmund’s asking price of £108million for the England international. Sancho is keen on a move to United but there is only five weeks of the window remaining for a deal to happen.

Sheth believes this window may be the only chance United will have to sign Sancho because other clubs, who cannot afford him now, will come in for him in the future.

But he claims United’s chances of signing the 20-year-old are as low as ever.

“It’s gone a little bit quiet as far as Jadon Sancho is concerned,” Sheth said on The Transfer Show.

“The information that I got this morning was that if United do not sign Jadon Sancho in this transfer window, there is a chance that Jadon Sancho will never become a Manchester United player.

JUST IN: Thiago Silva to Chelsea is ‘done’ with club set to make announcement 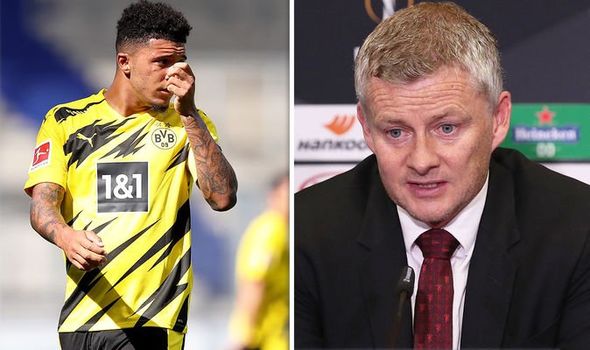 “It should be said that Jadon Sancho is willing to move to Manchester United and not only that, he’s ready to move to a club that is the biggest rival of the club that he left when he went to Dortmund, in Manchester City.

“But as it stands, we are as far away from Jadon Sancho going to Manchester United as we’ve ever been.”

Pallister does not think the likes of Fred or Scott McTominay can fill in that role.

“I suppose, if Pogba or Fernandes is injured, have we got anybody else with that kind of vision?” Pallister said to Compare.bet.

“Everybody was talking about McTominay and Fred doing really well before Paul Pogba came back into the side and before we bought Bruno. Especially Fred.

“You know, they haven’t got the vision that Pogba and Fernandes have got, but I think they give you a bit of steel.

“Scott’s a Manchester United boy, he’s come up through the system, he understands the club, so I’m not panicking that much about the midfield area.

“Maybe, as I say, we need somebody if Pogba or Fernandes is injured.”