Gary Neville has warned Manchester United that they won’t be able to “bully” Borussia Dortmund into selling Jadon Sancho on the cheap. The England international has emerged as United’s top transfer target heading into the summer with Ole Gunnar Solskjaer keen to bolster his front line.

Sancho has been a revelation since breaking through in the Bundesliga, playing his part in 34 goals last season.

His high performances have led to interest from some of Europe’s top clubs, but Sancho reportedly prefers a move back to England.

United seemingly have a free run at trying to sign Sancho, but Dortmund have stood firm in demanding in excess of £100m.

Reports emerged on Tuesday though that United are not willing to pay more than £50m to sign the 20-year-old.

JUST IN: Man Utd next game: When and who do Man Utd play after Brighton? 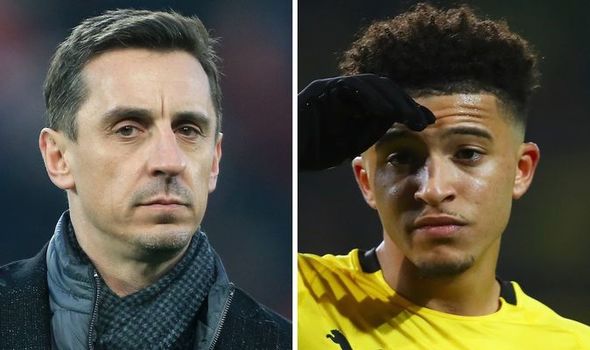 It has been suggested some clubs might be forced to listen to cut-price offers in the summer due to the financial implications from the coronavirus pandemic.

But Neville has warned United that won’t be the case with Dortmund and Sancho.

“I think you might have to pay a little bit more than that Ole,” he said on Sky Sports.

“That’s the problem because some clubs think that other clubs will get desperate and sell players on the cheap.

“But I’m not sure you can bully clubs like Borussia Dortmund.”

Angel Gomes looks set to follow in the footsteps of Sancho by leaving a big club in the hope of finding regular first-team opportunities.

The 19-year-old rejected a contract extension from United having struggled to break into the first-team under Solskjaer.

And Neville has praised Sancho for being a trailblazers for other English youth players to follow suit. 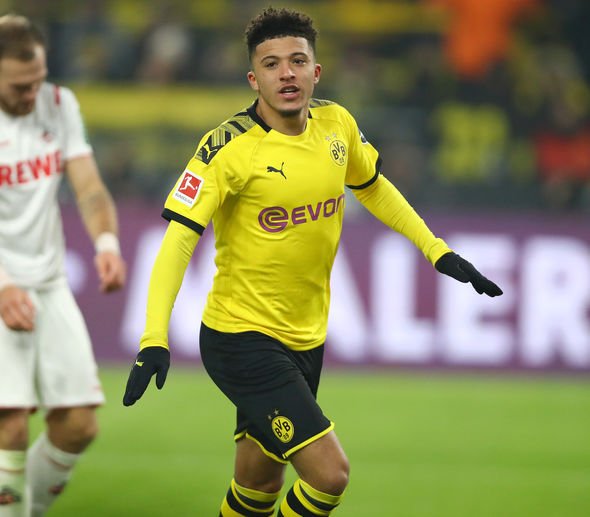 “What these young lads have demonstrated in the last two or three years is that they aren’t going to be hoarded by these big clubs that don’t give them football matches,” he said.

“It’s been proven that lads who have moved away and shown a bit of courage to get some football have benefited from it.

“It was something at the time you questioned, ‘how can you [Sancho] leave Manchester City?’

“‘How can you turn down the opportunity?’

“But they weren’t putting players in the first team Manchester city at that time and what he’s done is give himself a wonderful experience and furthered his career.”