Brighton star Kaoru Mitoma credits Saudi Arabia’s shock win against Argentina as ‘inspiration’ for Japan’s 2-1 victory over Germany, while Ritsu Doan calls it ‘the best day of my career’ after bagging the equaliser

Japan’s players said they were inspired by Saudi Arabia’s shock win over Argentina on Tuesday as they caused another huge World Cup upset with their giant-killing of Germany in Doha.

The Japanese squad had seen the Saudis come from 1-0 down to beat the mighty Messi and Co, and then did exactly the same as they humiliated Hansi Flick’s men with two late goals.

Brighton’s Kaoru Mitoma called it the greatest day of his life and added: ‘This moment was unbelievable for the team and for me. 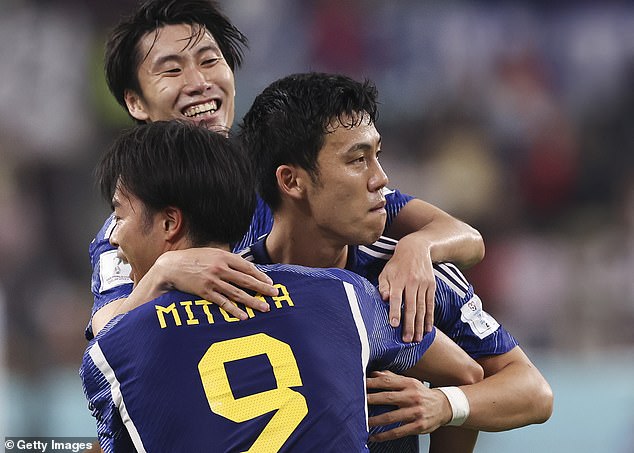 ‘We watched Saudi Arabia against Argentina. ‘They won that game and we thought we could have a great game here. It inspired me and the team a lot.’

And he said they went one better than they had hoped against Germany. ‘Our plan was a draw. Of course we wanted to win and so this game was incredible. The fans, coaches, manager and with everybody’s help we created history.’

Takefua Kubo, the Real Sociedad winger said watching Saudi Arabia’s win gave Japan hope. ‘We were going for our training session and we watched it on the team coach. Their victory inspired us!’

And he added: ‘We are happy for them (Saudi) and I heard there is a public holiday there today so maybe today, it happens in Japan!’

Ritsu Doan, who hit the equaliser, called it ‘the best day of my career’ and added: ‘It was a special goal. I’m very happy to play and score for the national team. I’m proud of myself, but it is only one game and one goal. Now I must aim to do the same in the next game.’ 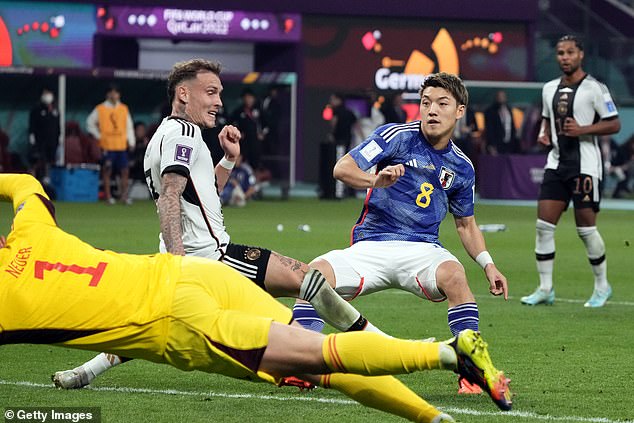 And he revealed that the players always believed they could win. ‘Before the game we were confident we could beat Germany. We respect them, how good they are and they had good chances in the penalty area, but at the end maybe we had a bit more luck.’

Captain Maya Yoshida, the former Southampton defender added: ‘I am very happy with the result, we did very well as a plan and made lots of defensive blocks. Conceding first was not the plan but we tried to stay calm and solid. We knew in the second-half there would be more chances and more space, especially being behind but, the substitutions made the good result. Our strengths are teamwork and unity, we showed it today and very happy for that.’

When asked what the reaction will be in Japan, he quipped: ‘I want to see my phone!’ 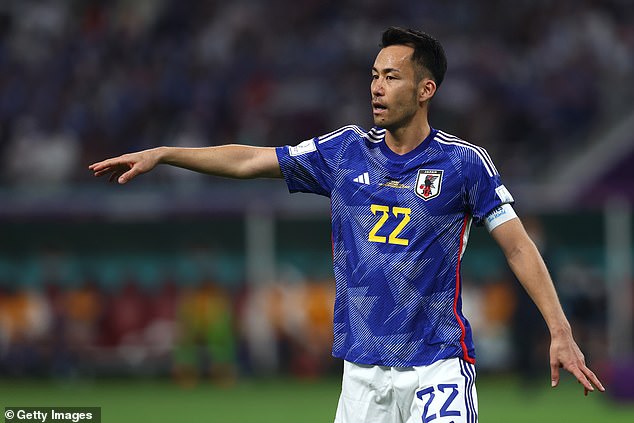 But the German players were understandably shell-shocked. Kai Havertz admitted afterwards that he was still struggling to come to terms with defeat.

‘The reason is hard to explain just ten minutes after the game,’ said the Chelsea forward.

‘We conceded two goals in ten minutes, which is not good when we had the game in our hands. But slipped very quickly out of our hands. We need to analyse that and try to make it better on Sunday.’

And he also spoke about Germany’s players putting their hands over their mouths during the team picture, as a protest before the game. ‘It’s important for us to make a statement like this. We spoke about the game and what we can do. I think for us, it was the right thing to do to show the people we are trying to help wherever we can. Of course, FIFA makes it much easier for us but we tried.’ 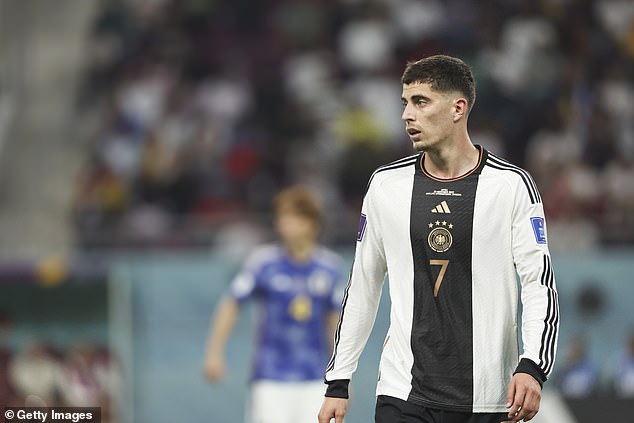 And Julian Brandt, the Dortmund midfielder said the dressing room was still in shock. ‘It was really quiet and we did not say a lot.

‘At the moment, we need to think about the game and what happened, the mistakes. We will speak in a calm way together. After the game people have a lot of emotions, some people want to cry, yell and shout. Sometimes it’s good to breathe and we have to analyse it, because it’s not over. We now have two really hard games.

‘This defeat makes it harder to qualify. When you don’t win the first game it is the worst feeling. We have to keep going and improve. We can still qualify, why not?

‘But today, was a big chance for us to be in a good position in the group. It’s possible, anything is possible.’