Van Dijk will undergo surgery on the knee injury he sustained in last weekend’s Merseyside derby and Jurgen Klopp says he is not putting a timescale on the defender’s return.

Pickford was not punished by the officials for the tackle, with the VAR official David Coote deciding it was not worthy of a red card. Liverpool asked the Premier League after the game to investigate the use of VAR in the incident.

The England No 1 has also avoided post-game disciplinary action from the authorities, which Klopp said earlier this week was difficult to accept. Georginio Wijnaldum went further, describing Pickford’s actions as “stupid”.

Adrian told Sky Sports: “It was a very bad challenge in a very bad position. It was late. I think no players are allowed to do this kind of challenge.

“I am a goalkeeper and I always defend the goalkeepers, but going for a ball like this is not fair. In that situation, he has not many chance to block the ball – just hurting the other player. 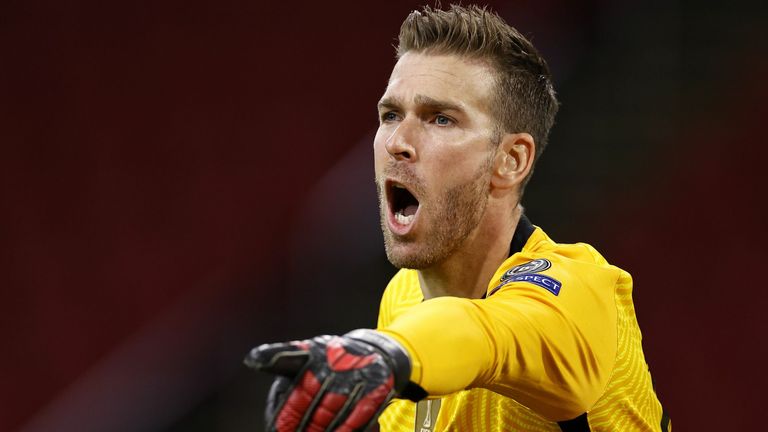 “Your body is at risk every time you play. You have a few challenges you are allowed to do but I don’t accept this kind of challenge and the Premier League don’t accept these kind of things.”

Klopp and Wijnaldum hit out at lack of punishment

Speaking earlier this week, Klopp said it was difficult to accept Pickford’s lack of punishment for injuring Van Dijk, while Wijnaldum criticised Everton’s tackling during the game, in which Richarlison was sent off for a dangerous tackle on Thiago.

“A few days ago something that should not have happened in a football game, happened,” said Klopp. “It was not the first time and it won’t be the last, but both challenges were difficult to accept.

“We can’t change this now. I spoke the day after and it’s hard for us as Virgil is our boy. It is difficult to take because the referee doesn’t see it.

“Michael Oliver is an excellent referee but he had the best view. Then VAR forgets the rules. As a human, I don’t want to see Everton players punished, but we all agree if you do something wrong, you have to deal with consequences.

“Right now there are only two people suffering with the consequences and they are Virgil and Thiago.”

Wijnaldum added: “The way Pickford went into the challenge was completely, in my opinion, stupid.

“I believe that he didn’t want to injure Virgil the way he injured him but the way he took the tackle, he didn’t care about what happened after the tackle.

“I think we had it a lot with the games against Everton. In my opinion, they take it way too far in the games we play against them.

“We know it’s a derby and everyone wants to win the derby but they took it a little bit over the top.

“The tackle from Richarlison on Thiago was also a nasty tackle. The way they were doing it was completely unacceptable. It makes it harder that they will not be punished.”

Aymeric Laporte’s injury last season put Man City out of the title race by Christmas. Will Liverpool’s season go a similar way? Or are they better set up to cope with the absence of their talisman, who played every single minute of their historic title-winning season in 2019/20?

On the latest Pitch to Post Review podcast, Jasper Taylor is joined by Gerard Brand and Ben Ransom to analyse exactly what this means for Liverpool.