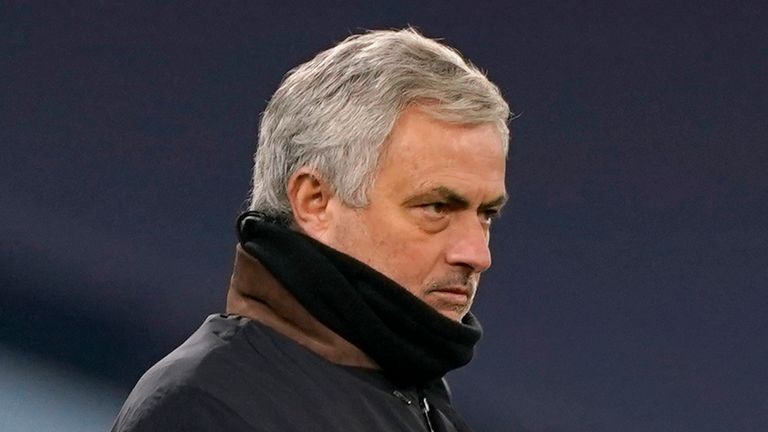 Jamie Carragher said Jose Mourinho’s “ship has sailed” on his Premier League management career after the three-time league winner was sacked by Tottenham.

Mourinho replaced Mauricio Pochettino at the Tottenham Hotspur Stadium in November 2019, leading the north London club to a sixth-placed finish in his debut campaign in charge.

However, this season has seen Tottenham struggle under the Portuguese, with the club currently five points adrift of the Champions League places. The former Chelsea and Manchester United manager has lost 10 league matches in the same season for the first time in his career.

No Premier League side has dropped more points from winning positions this season than Spurs and while Mourinho did guide them to Sunday’s Carabao Cup final against Man City, they also suffered an embarrassing Europa League exit to Dinamo Zagreb in March, as well as defeat by Everton in the FA Cup fifth round.

The 58-year-old’s spell at Tottenham was his fourth in the Premier League following two stints at Chelsea and another at Manchester United, but given his past – and present – allegiances, Carragher told Monday Night Football he doesn’t see a way for Mourinho to join another club in the division.

“Would he go to a middle of the table club? I just don’t see him there, I really don’t. It’s either international football or maybe Italy. The Italian champions this year will be Inter Milan, with Antonio Conte, who plays his type of football – so maybe you can get away with it a little bit more in Italy, because it was certainly a turn-off for Spurs supporters.

“I couldn’t see light at the end of the tunnel for Spurs. My argument was, was winning the Carabao Cup for Spurs supporters enough to keep Jose in a job, looking to the future?

“I always thought, keep him until the cup final, he’s great in one-off games, maybe not as much now, but I think Spurs have got less chance of winning now, and Pep Guardiola will be pleased when he sees that.

“Unless the players have gone to Daniel Levy and the feeling inside the club is that bad that they actually feel they do have more chance of winning at the weekend. Or Daniel Levy felt that if he won that cup it would make it more difficult to move him on.”

“I’m surprised, the timing is most unusual with a cup final on the horizon,” said the Sky Sports pundit.

“Something has gone on to bring this all to a head, I don’t think Jose would have been terribly happy with the way league form was going.

“To second guess what’s happened, Jose is an experienced manager and he has become so frustrated with the players. When you’ve tried everything, you end up having harsh words with them and falling out with them. News of unrest in the dressing room then gets back to the decision makers at the club and then there is only one outcome, and that is for the manager to go.”

When Mourinho took over from Pochettino, he declared himself excited to work with the group of players he had inherited from the Argentine and yet just 17 months later, Souness thinks that squad was not as good as he had thought.

“It’s very unusual to sack a manager in the week of a cup final,” Souness said. “Something has happened, or a number of things have happened, that have forced the chairman to make a decision. Does that improve or weaken Spurs’ chances of winning on Sunday, we’ll have to wait and find out?

“Jose is used to working with the very best players out there, he’s got so frustrated it has ultimately led to him having words with people and, as always, it’s the manager that goes. It’s an unhealthy situation and relationship. In the football business the tail wags the dog, bang average players can get top managers out of their job.” As for Mourinho, despite this latest sacking, Souness still believes the 58-year-old serial trophy winner will interest Europe’s biggest clubs if he can maintain his love for the game.

“He’s a big name, a big manager,” he said. “He will be welcomed by other big clubs. He’s got a track record that is right up there with the very best, he’s got a way of working which isn’t so attractive to a lot of people, but he gets the job done.

“Things haven’t worked at Spurs this time around, he’s left in the week of a cup final, but he did fulfil that ambition by getting them there. I think he will still be attractive to clubs, as long as he still has the appetite.”

“What Jose has done in this period is make them a really tough watch. You can say what you like about Spurs over the last 40 years but they’ve always been a good football team; they’ve always had a style of play.

“If Spurs fans were in here, I don’t think they’d enjoy that one bit. Too often I watch this Spurs side and there’s no real flair, there’s no excitement.

“I don’t think this is a bad squad of players; I’ve said it before and I’ll stand by it.

“This manager has chopped and changed at the back. To play football, you have to have a chemistry, a relationship with whoever you’re playing alongside.

“Earlier in the season, he played with (Pierre-Emile) Hojbjerg and (Moussa) Sissoko in midfield; sometimes they’d go into a back six. It wasn’t a great watch but at least you knew what they were trying to do. They were being defensive and getting results. Right now, they’re trying to be defensive, they’re not getting results and they’re an incredibly tough watch.

“The manager has to take responsibility. We talked in the past about a Jose masterclass; he loved it and celebrated it. If he doesn’t think this is a good squad… well, a great manager would find a way to get his players organised.

“They’re not playing great football and they’re losing matches. It’s not just about the potential of Harry Kane leaving, it’s the financial implications with the stadium, the assets, other players like Dele Alli, Harry Winks. Daniel Levy will not like the fact that his players are devaluing assets. He’ll hate it.”