‘First non-special thing he ever did’: Jose Mourinho is mercilessly mocked online after unveiling his new ‘unique’ tattoo of the three different European trophies he’s won as a manager… as fans joke if he’s having a ‘midlife crisis’

Jose Mourinho has been ruthlessly mocked online after showing off his new ‘unique’ tattoo that only he can have.

The Special One took to social media on Sunday to reveal his newest piece of artwork on his upper right arm, which depicts the Champions League trophy sandwiched between the Europa League and Europa Conference League cups.

Mourinho decided to get the design after becoming the first manager to win all three trophies, after he won the inaugural Europa Conference League with current side Roma back in May, beating Feyenoord in the final. 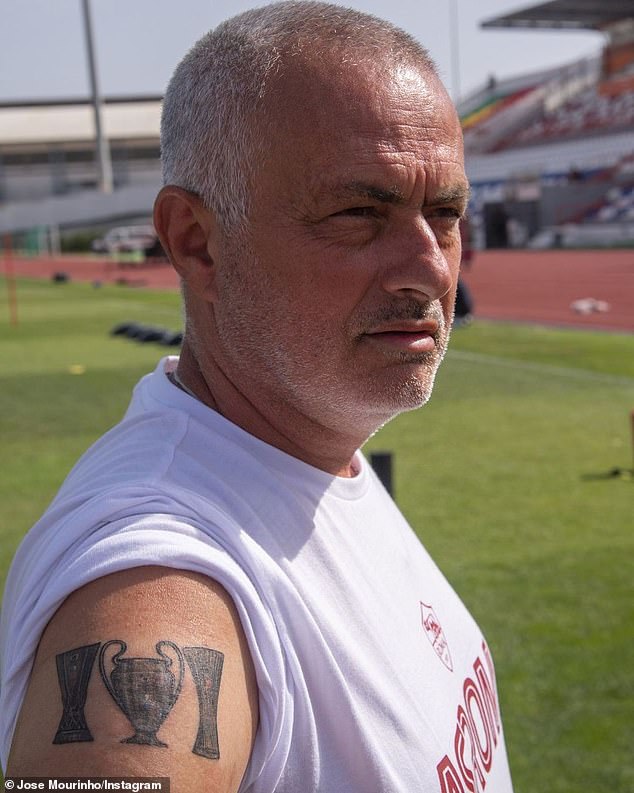 Mourinho has already lifted the Champions League on two different occasions, once with Porto in 2004 and then again with Inter Milan in 2010, while he won the Europa League with Manchester United in 2017.

And the Portuguese boss was proud to show off his achievements on Instagram.

‘This is my tattoo,’ Mourinho said. ‘The joy of the Roman people led me to do it. Then I thought about something special, something that would honour all the clubs where I won European competitions.

‘At the same time, I wanted a unique tattoo, one that, so far, I am the only one who can have it… Alberto showed me some proposals, I just changed a few details. Here is my tattoo.’

However, while Mourinho was happy to boast about his achievements in a new way, fans couldn’t resist in poking fun at the tattoo, jokingly asking if he was currently going through a ‘midlife crisis’.

One fan wrote: ‘Love the goat but this midlife crisis’.

Mourinho got the tattoo after becoming the first manager in history to have won the Champions League (left), Europa League (centre) and Europa Conference League (right) titles

Another wrote: ‘Am I the only one who think he’s too old for that?’ following by a thinking and laughing emoji.

SUTTON: Simeone will be praying Manchester City bottle it again…