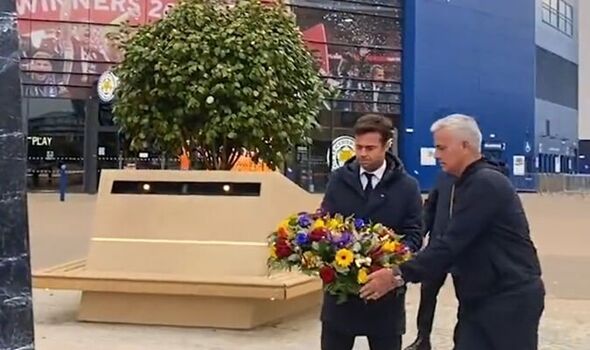 Roma manager Jose Mourinho paid a classy tribute to late Leicester owner Vichai Srivaddhanaprabha ahead of his side’s Europa Conference League showdown at the King Power Stadium on Thursday night. Roma and Leicester will both be looking to get the upper hand in the first-leg of their semi-final, before the return match in Italy next week.

Ahead of the encounter, Mourinho visited Srivaddhanaprabha’s statue at the King Power Stadium and laid a wreath at the foot of it. The former Chelsea and Manchester United manager then blew a kiss to the statue as he walked away.

Srivaddhanaprabha bought Leicester in August 2010 and the club won promotion back to the Premier League at the end of the 2013/14 campaign as the Foxes racked-up a staggering 102 points in the Championship.

Leicester looked certain to be heading back to the second tier after a solitary season in the top flight as they were marooned at the bottom of the table for much of the 2014/15 season. But the east Midlands club won seven of their last eight matches to miraculously avoid relegation.

And the following season they stunned the football world as they defied 5000/1 odds to win the Premier League title. Leicester continued to impress after their top flight glory – but tragedy struck in October 2018 when the helicopter Srivaddhanaprabha was travelling in crashed just seconds after it had taken off from the King Power Stadium pitch following a match with West Ham.

For the latest news and breaking news visit:/sport