Jose Mourinho’s first major act as Tottenham manager was to try to convince Harry Kane he could turn him into a Special One without going to Real Madrid or Barcelona.

At the end of his very first session in charge he discreetly put his arm around the England captain’s back and whispered in his ear: “Tomorrow morning – breakfast, then come to my office.”

He then used the first direct one-to-one meeting with any of his players to tell Kane he deserved to be one of the “movie stars of football”.

But that he did not go to Spain – football’s equivalent of Hollywood – to make it happen.

“The world looks to English football with an incredible respect but they still think that the movie stars of football, they belong to other places,” Mourinho told him. 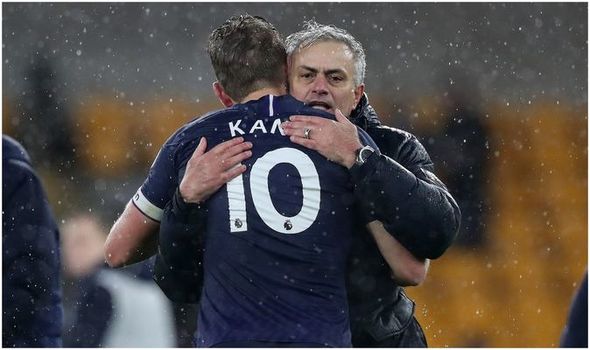 “I think we have to build also your status in that direction. My profile – I am a little bit like that as a coach. The reality is that my dimension is universal.

“And by being with me, I think I can help you to… poof.” Mourinho mimicked with his hands an exploding firework.

Kane has made no secret of his desire to match the exploits of Cristiano Ronaldo and Lionel Messi. Even Gareth Bale won four Champions Leagues by leaving Tottenham in 2013 to head to Spain.

But with Kane’s help, Amazon Prime’s All or Nothing documentary showed Mourinho arrived at the club convinced he could fulfil his brief to turn them into winners.

“You have better players than I had at Manchester United so I think the clubs has a lot of stuff ready to explode.