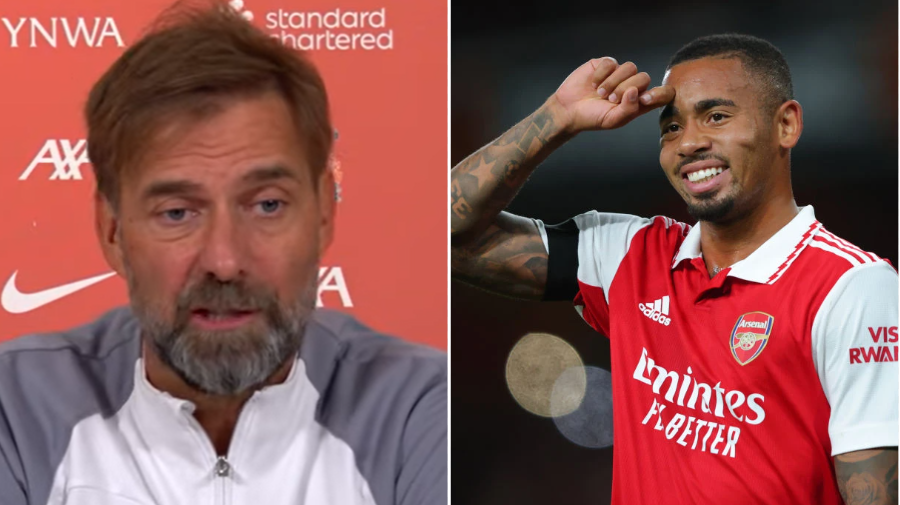 Jurgen Klopp has hinted Arsenal were only able to sign Gabriel Jesus because they weren’t considered a genuine threat to Manchester City’s status as Premier League champions.

The Brazil international left the Etihad Stadium in the summer after four-and-a-half trophy-laden years in search of a fresh challenge and the opportunity to relaunch his career as a conventional No.9.

Jesus has subsequently thrived in a central striking role and been rejuvenated as the jewel in the Arsenal crown, leading from the front and spearheading a side that appears to have a genuine title aspirations.

The likes of Chelsea and Tottenham were both interested in signing the 25-year-old in the summer, but City struck a £45million deal with Arsenal thanks, in part, due to their relationship with Arteta and the player’s close bond with technical director Edu.

Klopp, however, had another theory, saying:  ‘I don’t know Gabriel on a personal basis but I always liked him as a player.

‘I know City would not have sold him to every club but to Arsenal the distance was big enough.’

Klopp, with a trademark smile on his face, quickly suggested he meant the gap he was referring to was a ‘geographical’ before waxing lyrical about a player who has scored five goals already this season.

He said: ‘Exceptional player, you always saw that when he played for City.

‘The Gabriel Jesus role at City was a nine, a winger, last year everybody said City had no No.9, he was still there but he played obviously from the wing and now he can play his role.

‘If anybody knew how good he could be, not in a Man City shirt, in a fixed No.9 role then it was Mikel because he worked with him, same with Zinchenko.’

Arsenal head into the fixture as firm favourites and could end the weekend an almost unimaginable 14 points clear of Liverpool, but Arteta has warned his side they will need to up their level even if their opponents have been nowhere near their best this season.

‘It is a really exciting game against one of the top opponents in this league,’ said Arteta. ‘It will be a really demanding match that is going to require us to be at our best.

‘It is a fixture that everybody is looking for against an opponent that has shown the level they have in the last five and six years.

‘We have to show we have raised our level and are able to compete.’