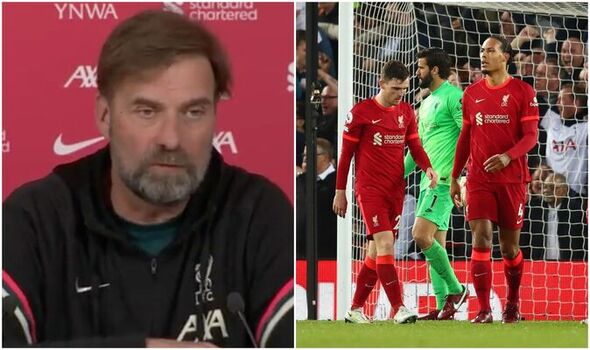 Liverpool boss Jurgen Klopp has challenged his players to overcome their Premier League title race setback by pretending Manchester City were beaten by Newcastle. The Reds’ draw with Tottenham meant they were three points behind the league leaders by the time City had thrashed Newcastle 5-0 on Sunday.

Klopp’s side are battling to win an unprecedented quadruple this season. They could still win the Premier League, the Champions League and the FA Cup after lifting the EFL Cup in February.

But City’s win over the Magpies, married with Liverpool dropping points against Spurs, left the Anfield outfit three points behind Pep Guardiola’s side. City are now favourites to win a fourth top-flight title in five years.

Klopp wants his players to use reverse psychology to overcome the challenge of topping their rivals with three games remaining. Liverpool would be in the same situation had they started the latest match week six points behind the reigning champions, beaten Spurs, and seen City lose.

“It’s easy to describe our situation. We drew, they won, makes it three points and the goal difference changed obviously as well. Or you see it like this: that we were six points behind and they lost and we won and the rest is exactly the same,” Klopp, whose side face Aston Villa next, said on Friday about the challenge that now awaits his players.

“We would be flying, we couldn’t wait till we can play Villa and try to win the next three points and all these kind of things. As human beings, it’s really cool, we can decide for ourselves how we see it.

“There are some facts but we’re allowed to ignore them. I try to help the boys see it like me. We’ll invite everyone else as well. Let’s just assume we won the last game and they lost and now we go to Aston Villa.

“It doesn’t make the Villa game a little bit easier, not at all, it just gives you a nicer perspective. That’s what I think is important as well.”

Meanwhile, City boss Pep Guardiola has accused the country of wanting Liverpool to beat them to the Premier League. “Everyone in this country supports Liverpool, the media and everyone,” Guardiola said.

“Because Liverpool have an incredible history in European competitions. Not in Premier Leagues, because they have won one in 30 years. But I don’t care. People want Liverpool to win more than us. They have more supporters around the world and in England more support Liverpool than us.”

On Monday, Klopp responded by quipping that not even the whole of Liverpool would want his side to regain the top-flight trophy: “I live in Liverpool. Here a lot of people want us to win the league, that’s true. But even here, probably only 50 per cent!”