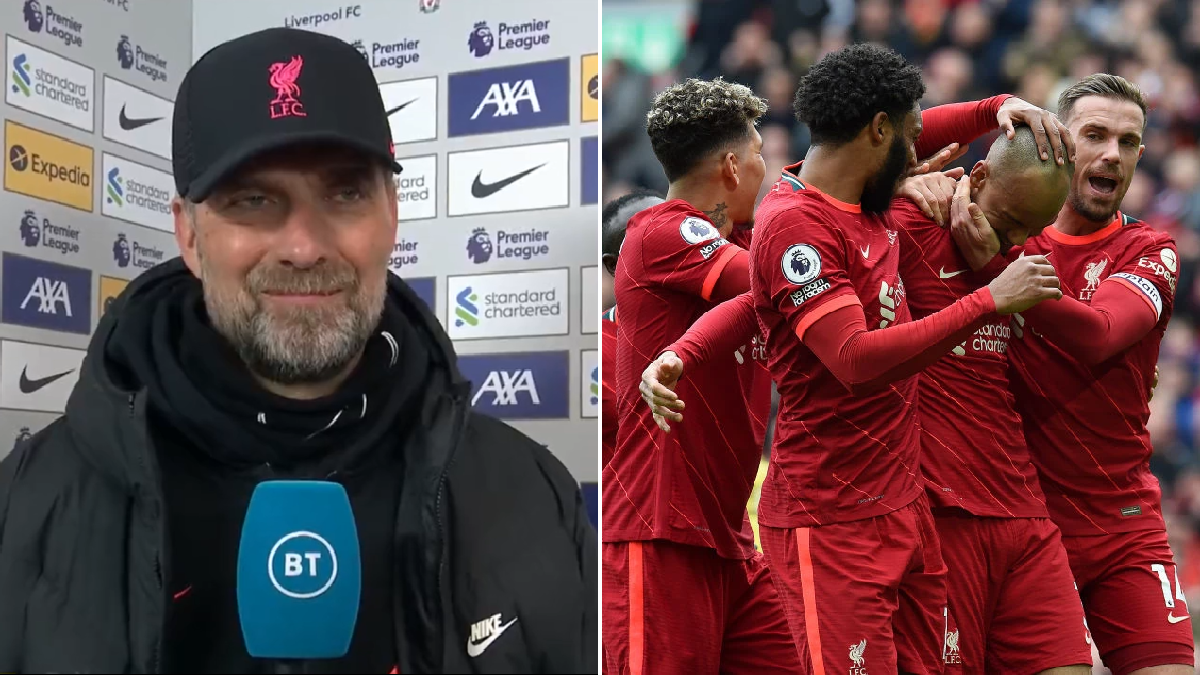 Jurgen Klopp reserved special praise for Diogo Jota and Joe Gomez after Liverpool beat Watford at Anfield to return to the top of the Premier League.

The Reds trailed defending champions Manchester City by 14 points in mid-January but a tenth successive league win took them above Pep Guardiola’s side, who face Burnley later in the day.

Liverpool were not at their fluent best but clinched a fairly routine victory over relegation-battlers Watford through Jota’s first-half header and Fabinho’s second-half penalty.

‘I really think it was a performance there in the right moments,’ Klopp told BT Sport after the 2-0 win. ‘The first goal was really nice play.

‘Credit to Watford and to Roy. He can really organise the team. Everybody knew what place he had to close to make it difficult.

‘We could have done better but after two weeks not together and the early kick-off it’s really tricky. But all teams have the same problems.

‘I don’t think after the international break I ever see the best game of the season. But we were very mature and very controlled.’

“Big banter with Trent on the bench that it’s not him it’s just the position!”

“Joey did well defensively and offensively, really happy about it.”

Asked about Gomez’s performance after the England international marked only his second league start of the season with an assist, Klopp added: ‘He was top.

‘He set up the goal and had another brilliant cross in the second half which could have been a goal.

‘How can you replace Trent Alexander Arnold? I didn’t ask him to play like Trent, I said play like Joe Gomez. He’s an outstanding player. He will have more games towards the end of the season.

Watford boss Roy Hodgson, meanwhile, insisted his side have ‘more to give’ as they fight to avoid relegation.

‘There was a lot there we can take forward. We have to take anything good into our last games,’ the former England boss said.

‘We’ve got more to give. The spirit is good. That was shown in today’s performance and the last one against Southampton.

‘They are prepared to work hard enough. We just need to produce the quality football to score the goals.’

Mikel Arteta 'not satisfied' with Arsenal team despite win at Olympiakos