Leeds have emerged as contenders to sign Valencia forward Rodrigo Moreno, reports claim. The Yorkshire club are looking to bolster their attacking options ahead of their return to the Premier League.

Leeds won the Championship with 93 points to secure a return to the top-flight after a 16-year absence.

But manager Marcelo Bielsa is desperate to bolster his centre-forward ranks and has identified Rodrigo Moreno as a potential addition.

Rodrigo has registered 59 goals and 41 assists for Valencia in 220 appearances in all competitions. 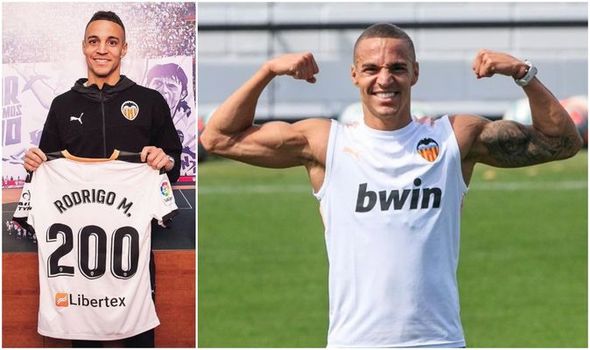 The 22-cap Spain international has just under two years remaining on his contract, which expires in June 2022.

And Spanish publication Marca claim his future at the Mestalla Stadium is uncertain.

The newspaper calculates that Rodrigo has lost as much as 60 per cent of his previous £54million valuation and Valencia would like to cash in before it drops further.

Atletico Madrid were prepared to meet his £54m asking price in August 2019, while Barcelona were close to securing his signature in January before the deal fell through.

Now, Valencia will accept around £22.5m for Rodrigo’s services and Leeds are on the trail.

Manager Bielsa is believed to have shown ‘real interest’ in the talented 29-year-old and Leeds have decided to ‘undertake the operation’ of trying to bring him to Elland Road.

Rodrigo does have Premier League experience in his locker.

The Spaniard made 17 top-flight appearances for Bolton during the 2010-11 season, scoring once against Wigan and providing an assist during a 2-1 defeat to Sunderland.