Manchester City’s Gabriel Jesus spared the blushes of strike partner Sergio Aguero to earn his side a morale-boosting victory ahead of their big Champions League trip to Real Madrid.

In a match littered with VAR controversy, Aguero missed the visitor’s fifth penalty in seven attempts midway through the second half after handball had been awarded against Leicester’s Dennis Praet.

The Argentine was later replaced by Jesus, who was on the pitch less than three minutes before converting a pass from ex-Foxes winger Riyad Mahrez for his 80th-minute winner – the Brazilian’s 17th goal of the season. 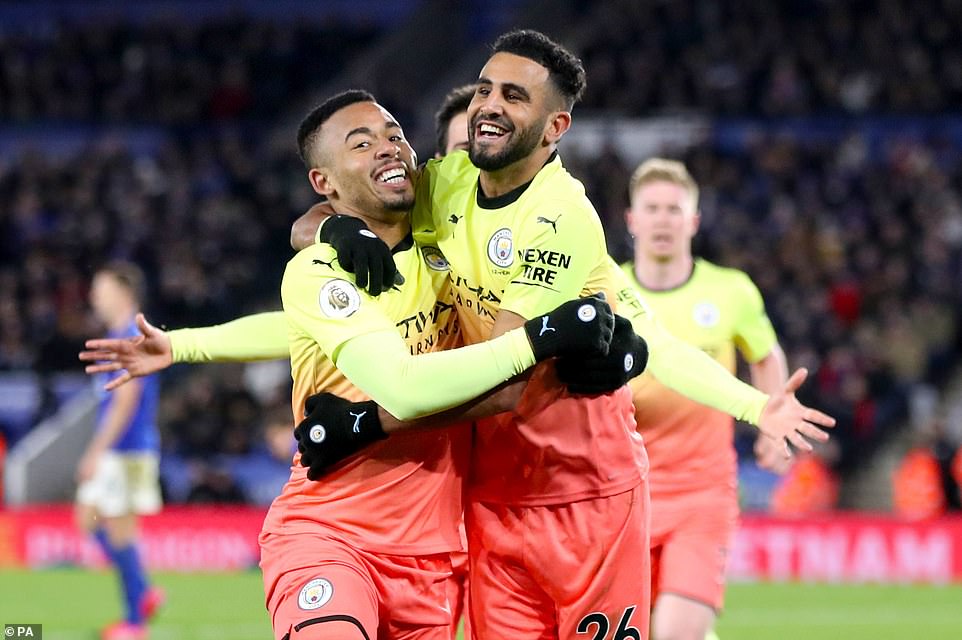 Leicester, who remain third but are now seven points behind Pep Guardiola’s side, felt aggrieved that Pep Guardiola’s goalkeeper Ederson wasn’t penalised for punching Kelechi Iheanacho shortly before half-time as they challenged in the air.

Despite his trip to the Bernabeu next week, Guardiola went strong with his line-up at The King Power. Aguero and Kevin De Bruyne started, so did Mahrez whose name was booed by fans who once adored him.

For Leicester, Brendan Rodgers opted for a back-five to compensate for the absence of holding midfield players Wilfried Ndidi and Hamza Choudhury. 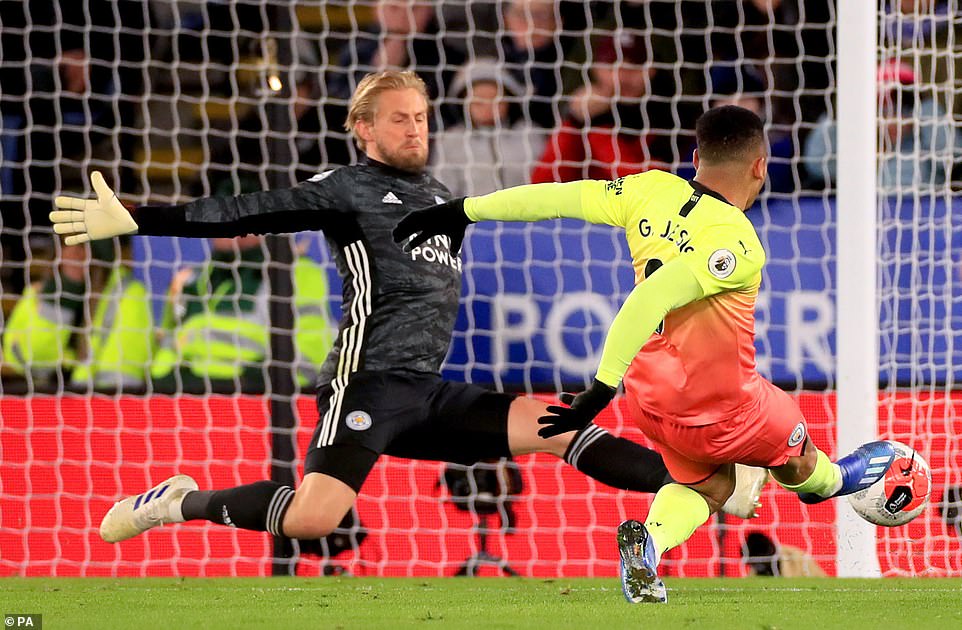 The game’s first chance fell to the home side as City central defender Aymeric Laporte showed rustiness after his long injury lay-off and was robbed inside his own half.

Quick-thinking Youri Tielemans released Vardy and the Premier League’s leading scorer raced clear and beat Ederson only for the ball to strike the base of the left-hand post and bounce to safety.

City recovered from the early scare to dominate possession as usual. Mahrez fired in the game’s first shot on target which his former team-mate Kasper Schmeichel saved.

City’s sense of purpose despite the league title conceded to Liverpool fitted in with Guardiola’s demand for unity following the club’s two-year Champions League ban, which they are appealing. 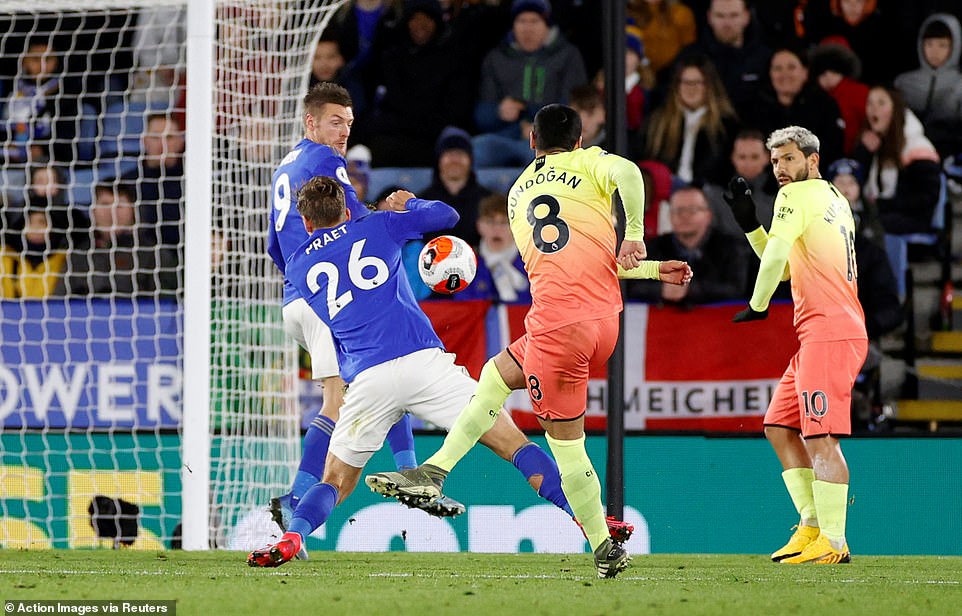 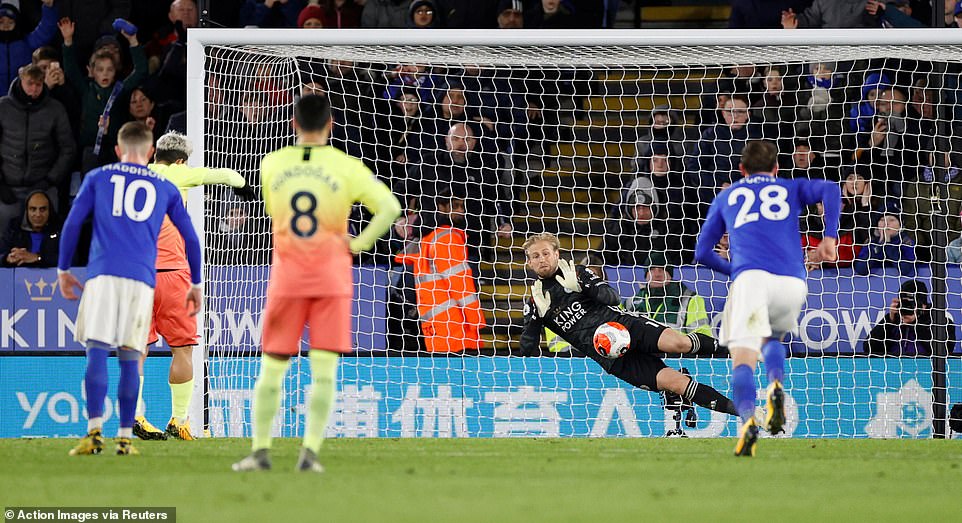 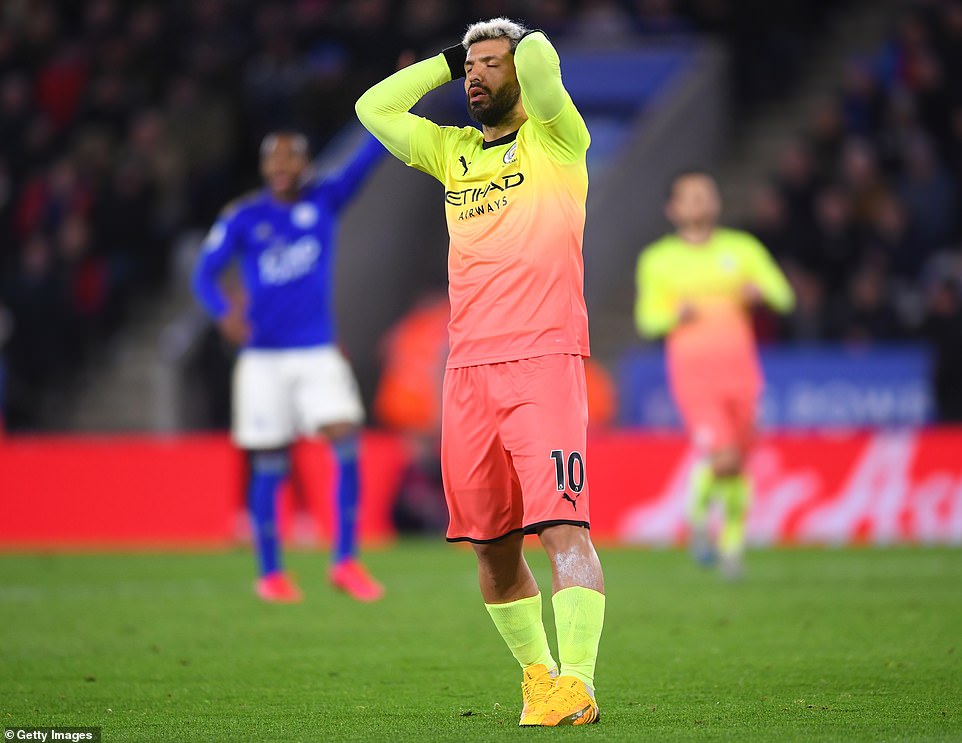 The choice of a loud third kit, fizzy yellow and Georgia peach, was a further statement that City aren’t hiding in the face of Uefa pressure.

Leicester are a very good side however and even though they didn’t see a lot of the ball, they remained dangerous in patches.

There were penalty appeals when James Maddison’s free-kick struck De Bruyne’s hand but the Belgian was protecting his face so it seemed fair the protests were rejected. Maddison’s second set piece was even closer, forcing Ederson to dive to his right and palm away. 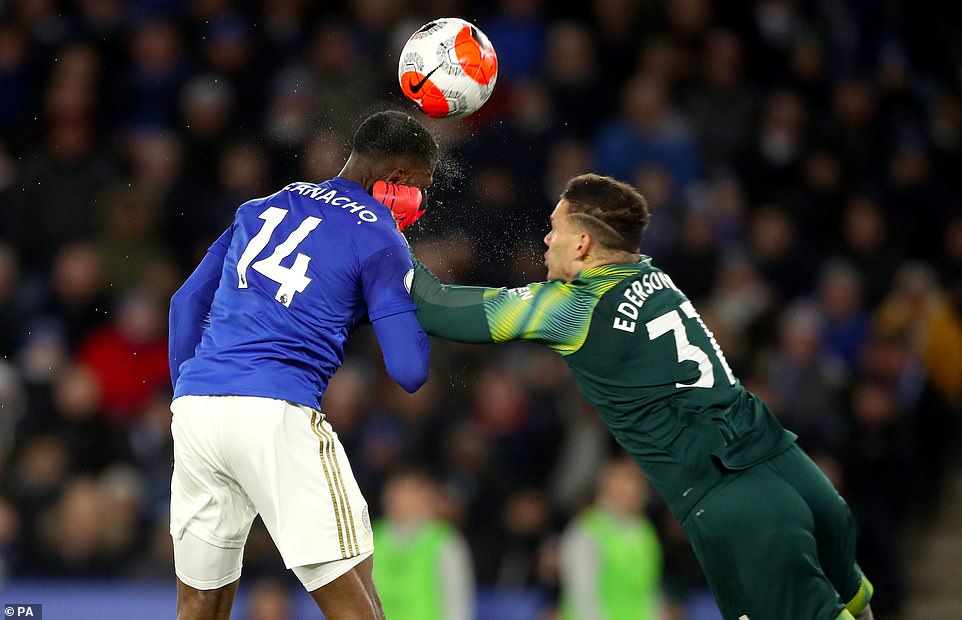 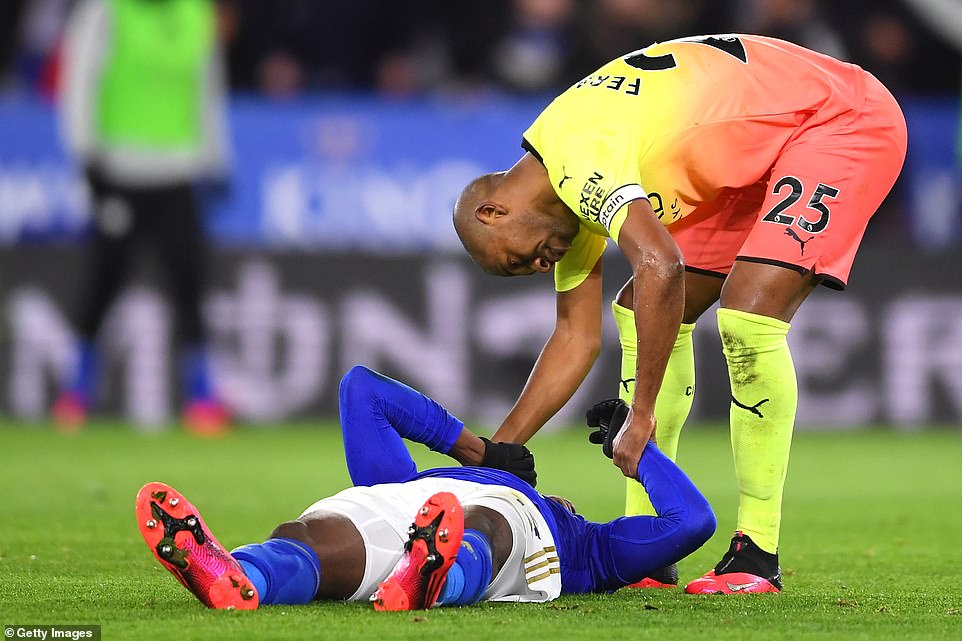 Some of City’s football was good enough to be a major concern for Real boss Zinedine Zidane ahead of Wednesday’s big night in the Bernabeu. De Bruyne in particular looks at the peak of his powers.

His slide-rule pass to Bernardo Silva after 34 minutes was perfection and the Portuguese forward couldn’t believe it when his cross into the box evaded three team-mates queuing to put the ball in.

De Bruyne’s strength was impressive too – his duel with Leicester’s tough defender Caglar Soyuncu gripping to watch. Only Laporte, who missed six months with a knee injury, looked off the pace.

Laporte lost a 50-50 to Kelechi Iheanacho shortly before half-time that led to the move that should have seen Leicester awarded a penalty. 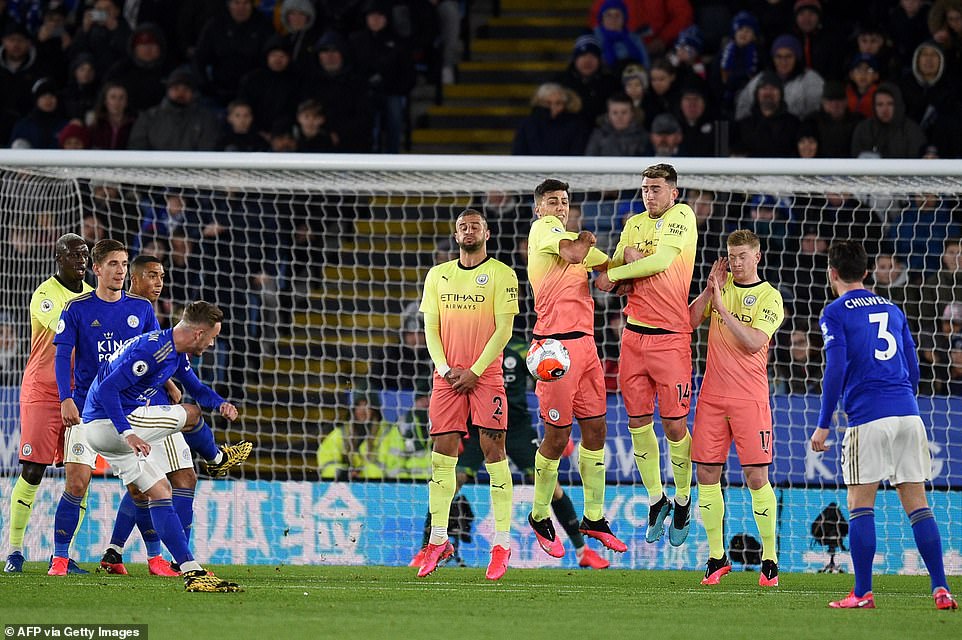 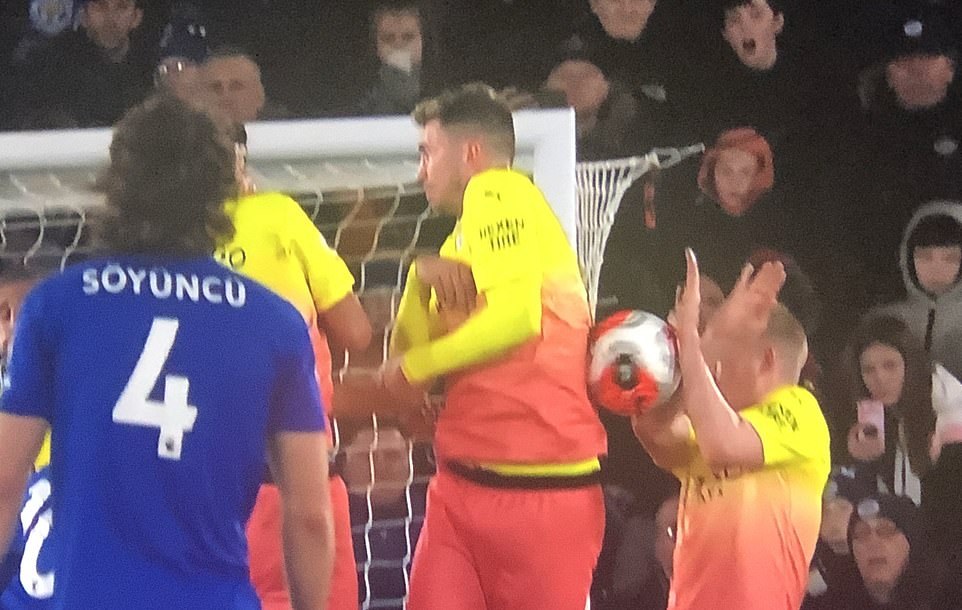 Maddison’s cross into the box was nodded on by Iheancho who was then punched in the head by the challenging Ederson. If a centre-half had made the challenge, there would have no doubt a spot-kick would have been awarded.

But this time the Manchester City ‘keeper was given the benefit of the doubt – a VAR check deciding both players had gone for the ball. The prostrate Iheanacho needing lengthy attention to check he wasn’t groggy and though he continued to the interval, he didn’t reappear after half-time, replaced by Harvey Barnes.

These two teams usually put on a good show. Guardiola’s first visit to the King Power ended in a 4-2 defeat that saw him petulantly state: “I’m not a coach for the tackles”. Last season, Vincent Kompany’s winner at The Etihad was seen as the decisive moment in the title race. 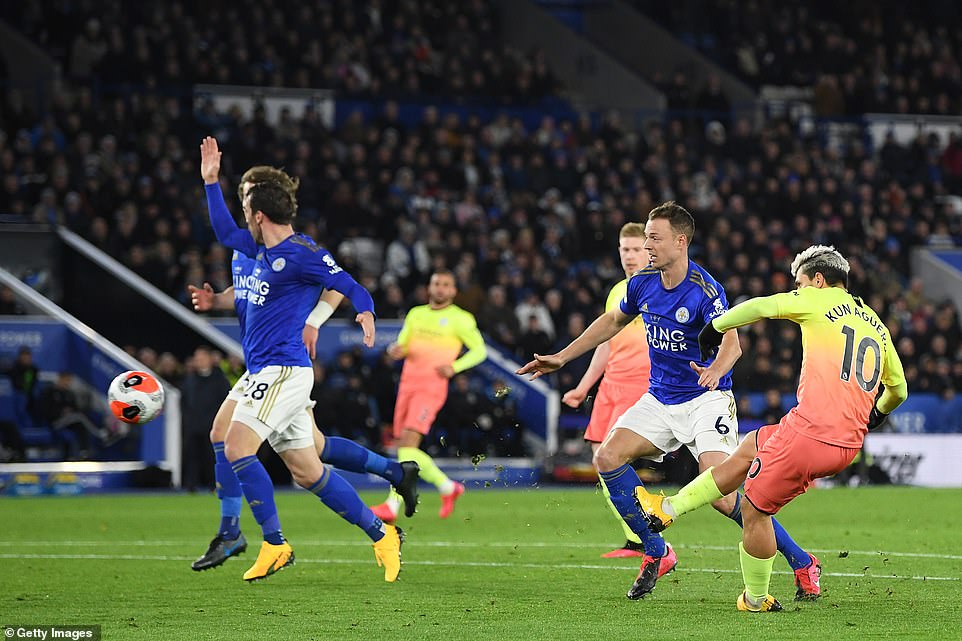 With only four points between the teams at kick off, it wasn’t surprising the game ebbed and flowed with real pace and quality. Schmeichel pulled off a great stop to deny De Bruyne after 50 minutes.

Laporte, who didn’t inspire confidence, was withdrawn shortly before the hour with Nicolas Otamendi replacing him.

The visitors then got a big VAR decision in their favour on the hour – but couldn’t take advantage. Dennis Praet rushed out to block an Ilkay Gundogan shot leading with his elbow. Furious City players surrounded referee Paul Tierney but had to wait until Stockley Park confirmed a penalty. 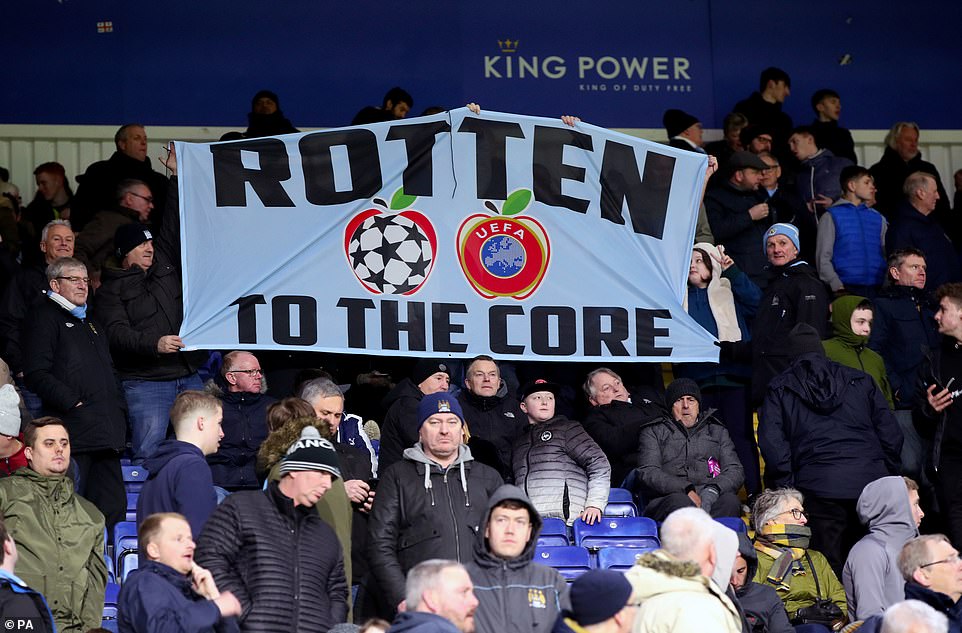 Aguero stepped forward but couldn’t alter his side’s rotten record from the spot – hitting the ball firmly with his right foot but not towards the corner, allowing Schmeichel to dive and save.

He follows Jesus (twice), Raheem Sterling and Gundogan as City players who have missed spot-kicks since December.

The crestfallen Argentine, who has failed with 13 of 49 penalties during his career, was sacrificed for Gabriel Jesus after 77 minutes, and then watched his replacement score within three minutes.

Mahrez made an electric break from the halfway line and slipped pass to Jesus who finished neatly from eight yards. There was an anxious VAR check for offside with Jesus playing off the shoulder of the defender but this time the technology worked properly and the goal was given. 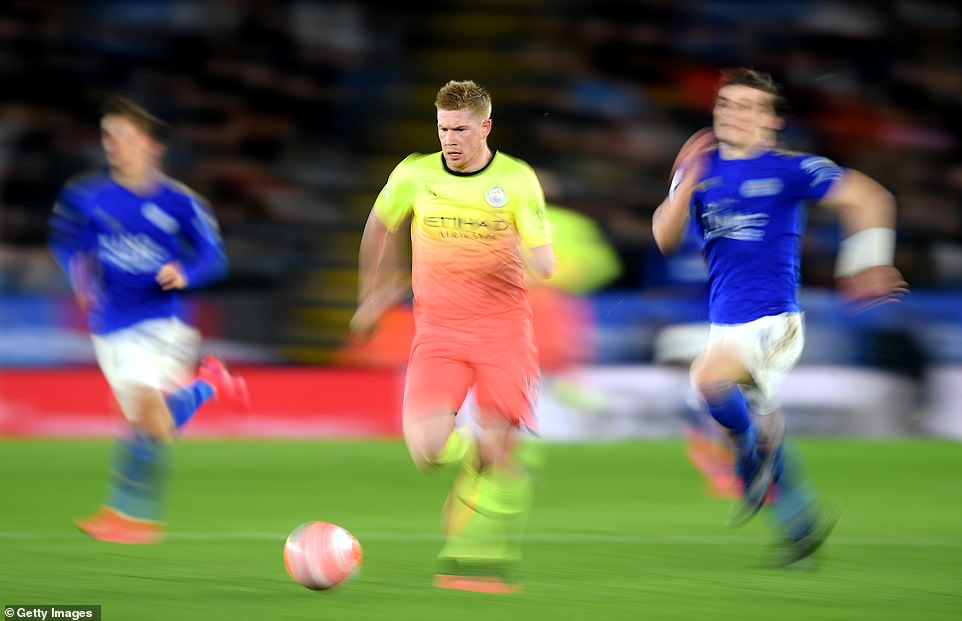 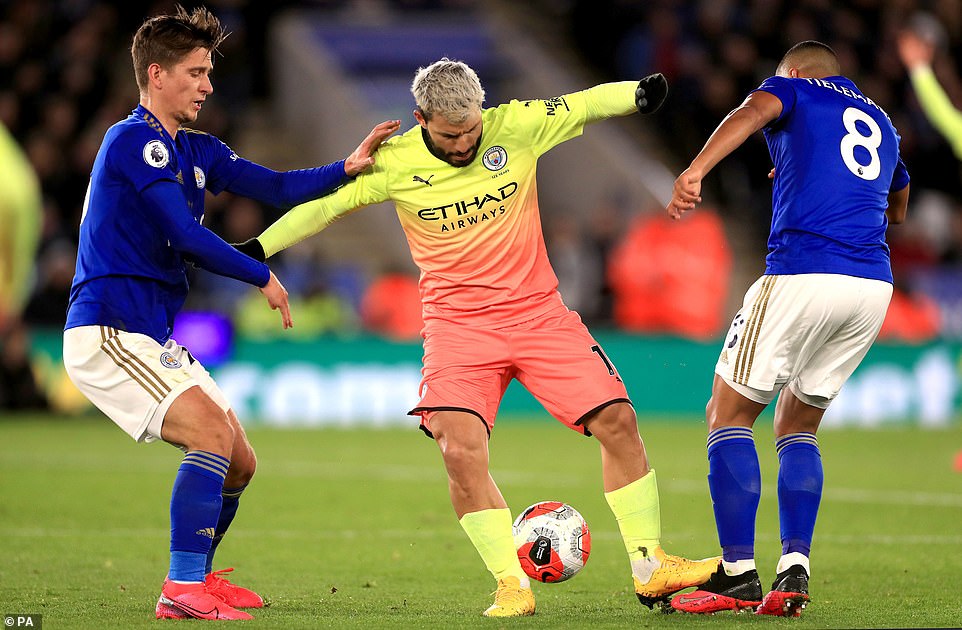 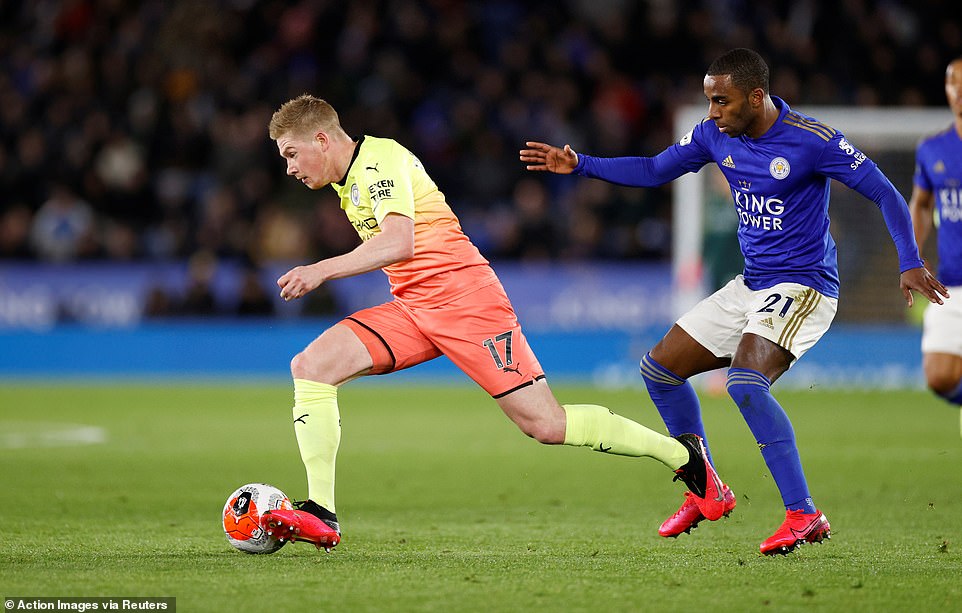 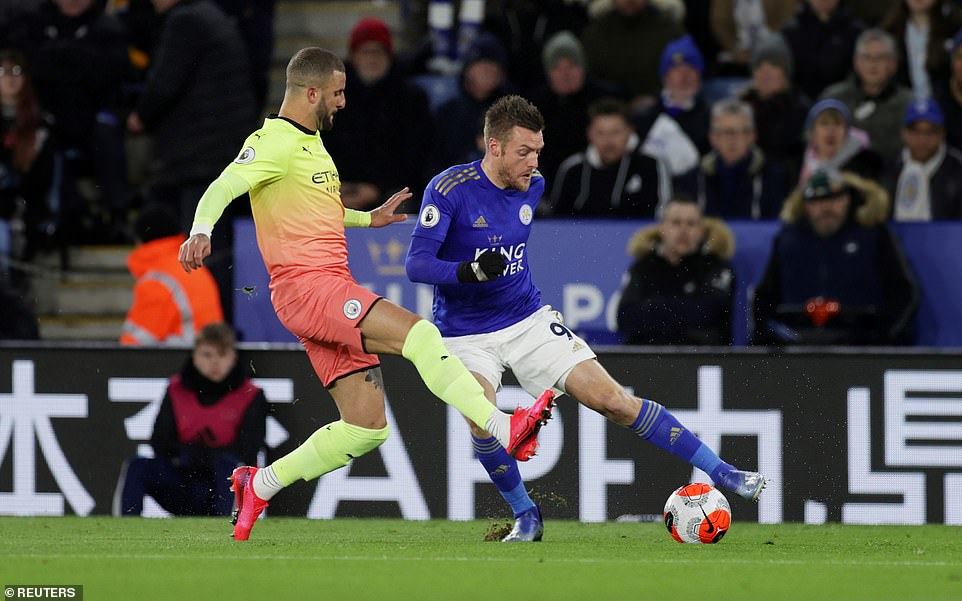 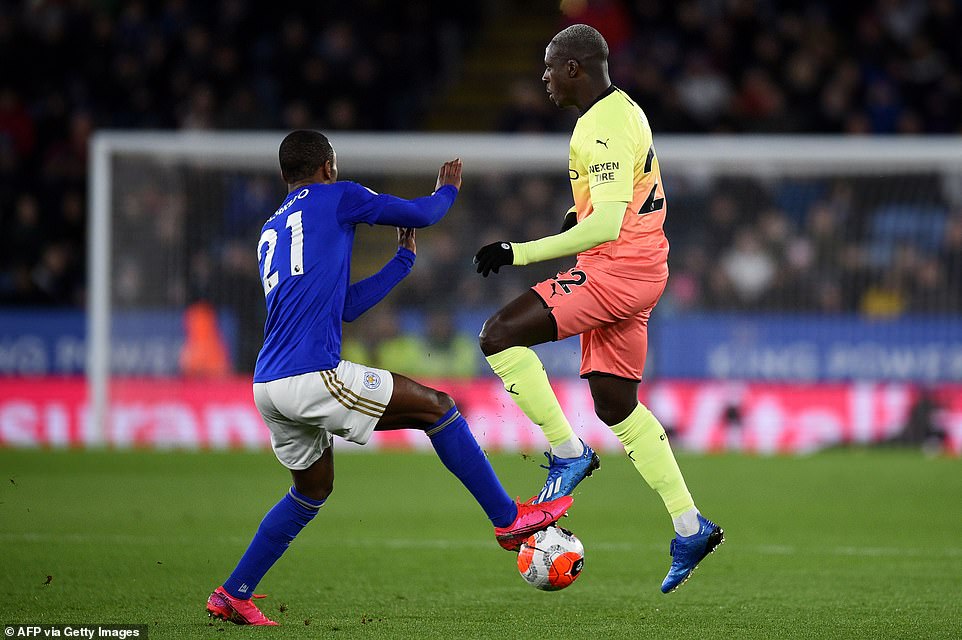 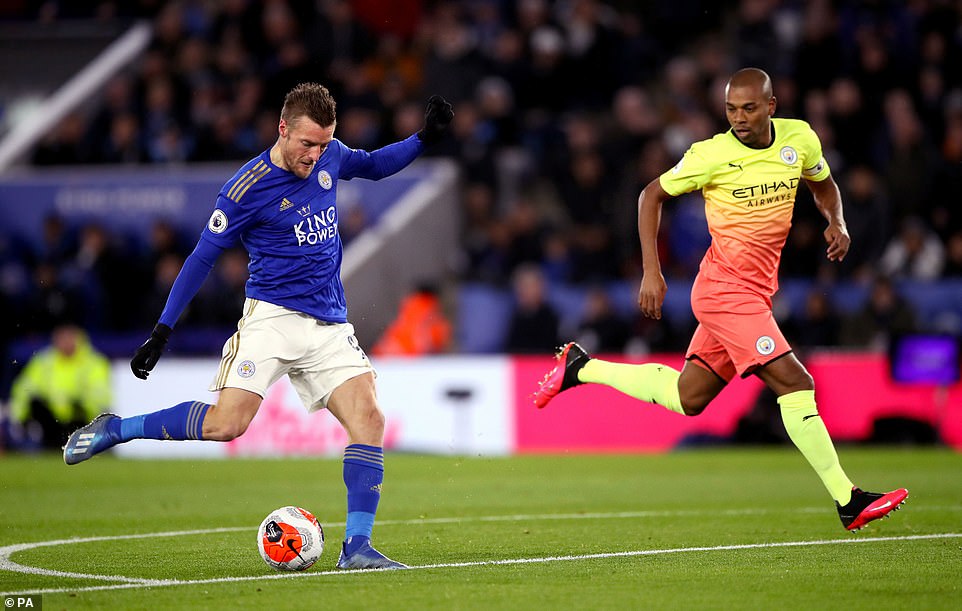 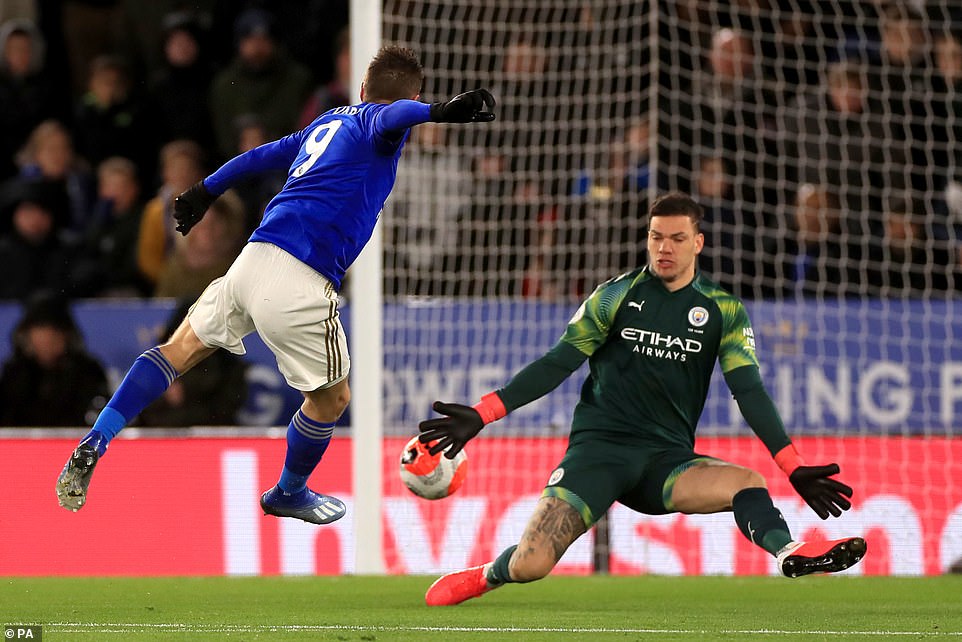 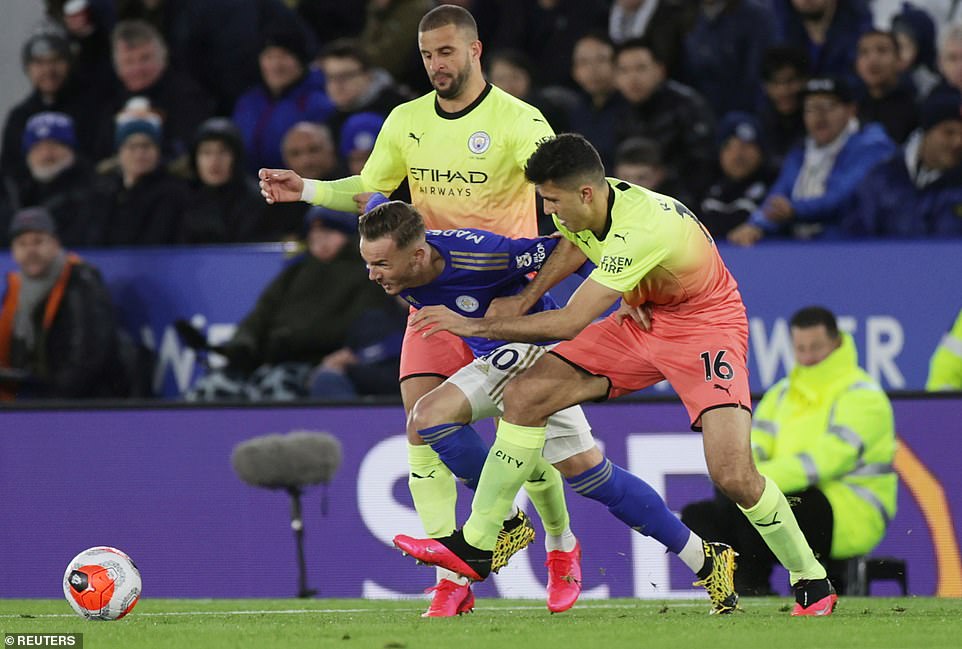