Liverpool beat Manchester City 3-1 in the Community Shield this Saturday thanks to goals from Trent Alexander-Arnold, Mohamed Salah and Darwin Nunez. The Premier League’s highest-quality heavyweights, both buoyed by blockbuster signings, put on an entertaining show at the King Power Stadium in front of packed-out stands. With Premier League action just a matter of days away, Express Sport takes you through five things we learned.

Meetings between Jurgen Klopp and Pep Guardiola have been too close to call in recent years. Saturday’s tie was hardly a classic in terms of quality, which is to be expected given that both teams are still working their way to full match sharpness, but the Reds showed that they may be better prepared for the return of competitive action.

City lacked the assurance they have become known for under Guardiola, particularly when playing out from the back as fans were exposed to a series of nervy moments early on. The Sky Blues only have a shortened pre-season under their belts, which was reflected in the pattern of play.

Alexander-Arnold, Salah and Nunez were all on hand to sew up the victory and strike the first blow ahead of another season-long battle in 2022/23. 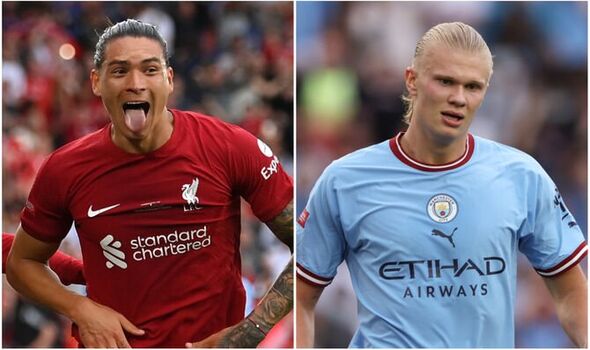 All Liverpool eyes were on Darwin Nunez when he emerged from the bench after the break, and he instantly showed his dangerous streak by racing through on goal and being bundled over by Ederson. The flag soon went up, but his energy continued to force City into tough positions and he missed a one-on-one minutes later.

The Uruguayan eventually proved the difference, however, when he brilliantly drifted to the back post and headed Salah’s cross onto the hand of Ruben Dias. The Egyptian stepped up and rifled home the spot-kick, and Nunez put the icing on the cake in stoppage time with a stooping header to put the result beyond doubt.

The most obvious takeaway from a City perspective was a lack of harmony between the creative stars and marquee summer signing Erling Haaland. Time and again, the Norwegian made the kind of runs in behind that earned him bags of goals at Borussia Dortmund, but they were generally ignored by the Sky Blues.

It seems as though it will take Pep Guardiola’s team some time to get used to having that kind of weapon up top after winning the league last term without a senior striker. On a rare occasion that Haaland was found over the top, he shrugged off Andrew Robertson before forcing Adrian into a save.

He was, however, left red-faced in the game’s dying embers as he missed a simple chance, striking the bar from point-blank range.

Salah and Trent primed and ready

Two of Liverpool’s star players, Salah and Trent Alexander-Arnold, showed no signs of ring rust at the King Power with a pair of impressive displays. The Egyptian gave City left-back Joao Cancelo a tough afternoon, particularly in the first 10 minutes when his pace and dribbling were as sharp as ever, and he converted a penalty in the second half.

As for Alexander-Arnold, his curled effort took a minor deflection off Nathan Ake before finding the corner of the net and he flew forward to test City at every opportunity. The England international notched a truckload of assists last campaign and his numbers are likely to be solid again if he carries this form into the new season.

Argentinian youngster Julian Alvarez may have to force his way into Guardiola’s plans with Haaland occupying the lone spot through the middle. To do that, he will have to take the chances given to him and minutes after emerging from the bench to fill in on the right flank, he popped up with a poacher’s effort to draw City level.

Despite having nurtured an exceptional reputation from his time in South America with River Plate, the 22-year-old will still have doubters for his first foray into European football. Getting on the scoresheet against the Reds, despite the result, may have been the first step towards proving them wrong.