Liverpool’s big game jitters: Reds didn’t score a single goal in their three cup finals and failed to win ANY against the top four… foiled by deep defending and poor finishing, fine margins have hurt them

Liverpool have more trophies than goals in cup finals this season. Yes, you read that correctly. They have gone 330 minutes of major showdowns this campaign without scoring a single goal, yet have the FA Cup and Carabao Cup to show for their work.

From their three finals, the first two went to penalties after two goalless draws at Wembley. Where their usual attacking flair fell short, they fell back on their hardy defence, and that was enough to carry them to two successes in nervy shootouts.

The Champions League final was a different prospect although, though. While the Reds were frustrated by the stout shape and lightning counter-attacking from Chelsea earlier this term, they were undone by their own lack of prolificacy in Paris. 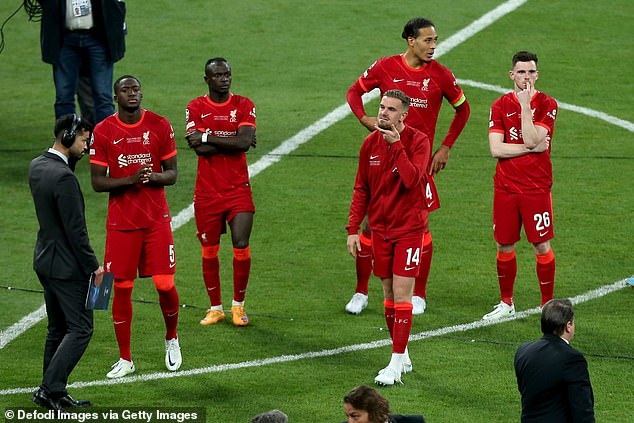 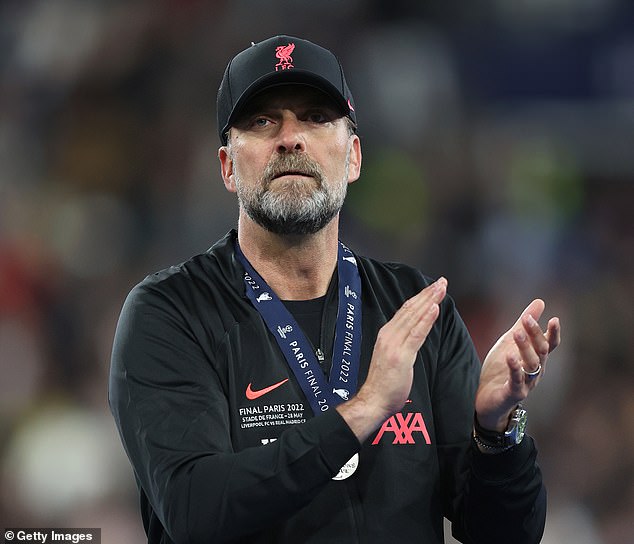 It was a curious game, one they essentially dominated from start to finish.

Real Madrid’s magicians Luka Modric and Toni Kroos were reduced to innocent bystanders for much of the clash at the Stade de France, with Liverpool mustering up more shots than their opponents, 24-4, with nine of them on target.

Where, then, did they go wrong? Are there recurring threads through each final?

The answer to that is yes and no, as we will explain throughout this piece. 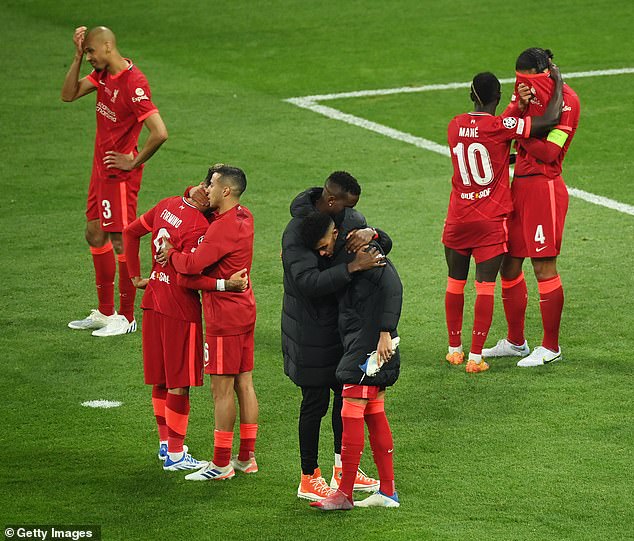 For starters, Liverpool’s trademark style is based around a ferocious press. They do not keep the ball in safe areas, and instead prefer to play vertically at speed. Very rarely do they change from this, such is the quality of Jurgen Klopp’s coaching.

Madrid, however, have a more simplistic approach. Their game is comprised of confidence and utter belief in how they move the ball. Under the lights at the weekend, they were quick to drop back into their shape and remained compact.

Time and time again, they have survived in the competition by the skin of their teeth, but deservedly so in light of their creativity and resolve in testing moments.

It fell to the Anfield outfit, then, to do the breaking down. The centre of the pitch was congested, a purposeful move from Madrid, forcing them to move play into the wider areas and remain on their toes through the middle, with one-touch passing. 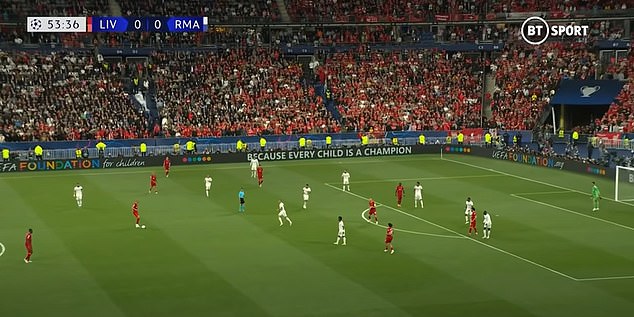 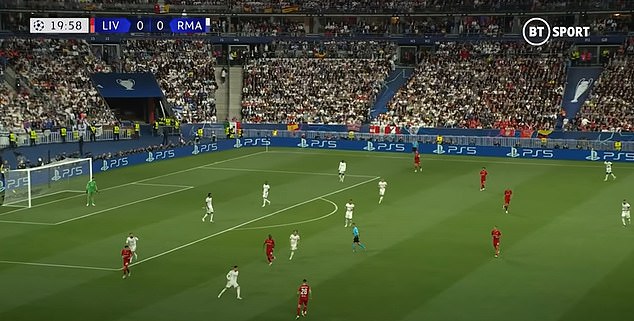 Play was shifted out wide by Liverpool, with Madrid keen to close off the middle of the pitch

There was next to no pressure on the ball from Madrid, who were content to allow their rivals to dictate the flow of the game and stayed fixated on closing off space. In transition, they floated balls behind Trent Alexander-Arnold, missing out the centre.

The presence of Karim Benzema allowed them to do this, but Liverpool were rarely flustered. Instead, they enjoyed superb passages, and should have found the net. The fact they did not is freakish. Not once did they look as though they panicked.

Despite this, the wily Carlo Ancelotti said that the Reds were ‘easier’ to play against than the other sides they faced in the Champions League on their path to the final.

He said: ‘I think it helped that Liverpool were easier to decipher than the others, because they have a clear identity and we could prepare the way that we did. We knew what strategy to take – don’t give them space behind the defence to run into.’ 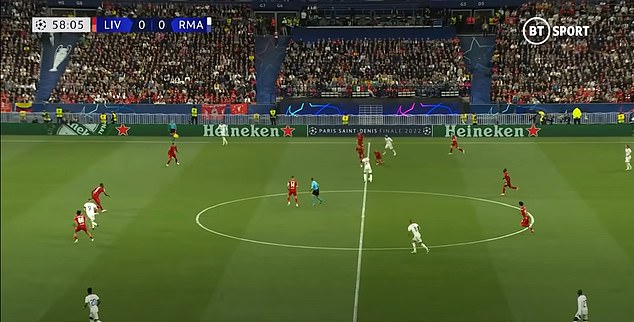 The takeaways? Poor finishing let Klopp’s team down. The chances were there, but they were punished at the other end by Madrid, who were happy to bide their time.

And what about the FA Cup final? Again, Liverpool did not score, but were able to lift the trophy thanks to some cool penalties in the shootout when it mattered.

This clash was a war of attrition, a tricky game which saw both teams nullify each other more often than not. Thomas Tuchel’s men were well-drilled, and their structure proved the perfect foil to Liverpool’s penchant for pressing high.

In their build-up, two of their midfielders were able to drag out Liverpool’s No 8, Naby Keita or Jordan Henderson, opening up space around them. Their back three also stood firm, and handed them enough width to stretch their opponents. 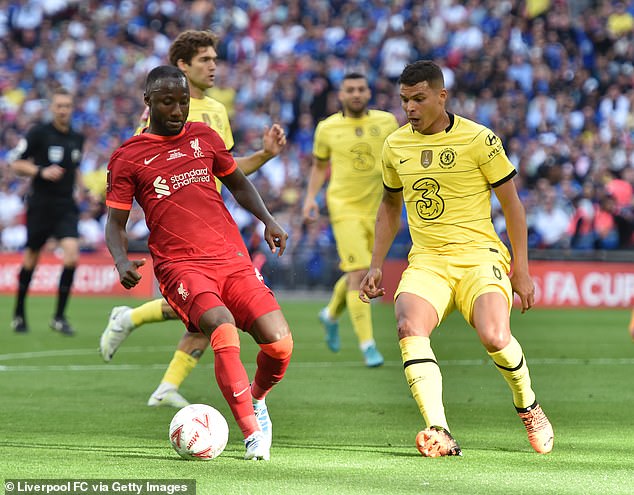 Chelsea looked to drag Naby Keita out in the FA Cup final, but ultimately lost out on penalties 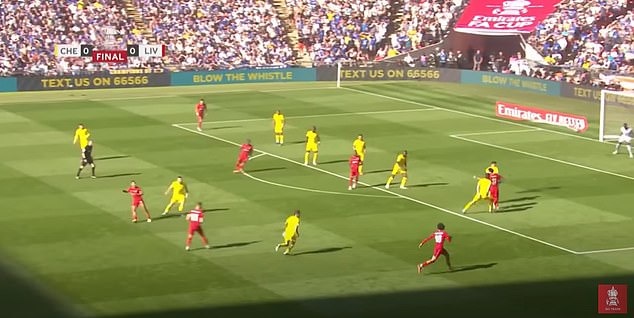 Just as the Champions League was decided in the full back area, this final saw the Blues’ centre backs left wide, attracting Liverpool’s wingers towards them. In turn, Chelsea’s wing backs were able to hug the touchlines and get in behind.

Good pressing traps were on display, leading to a stalemate which was easy on the eyes. Both teams were restricted to just two shots on target, however, although Liverpool had more attempts overall, 17 to 10, under that famous Wembley arch.

Again, it would be unfair to say the Merseysiders lost their nerve or played poorly. Instead, they were marshalled well by Chelsea, who fell short right at the death.

As for the Carabao Cup final, Liverpool again looked tidy enough. They set out in a 4-3-3, facing up against a defensive block from Chelsea, who opted for a 5-2-3. After a shaky start, they dominated the first half, with their No 8s causing danger out wide. 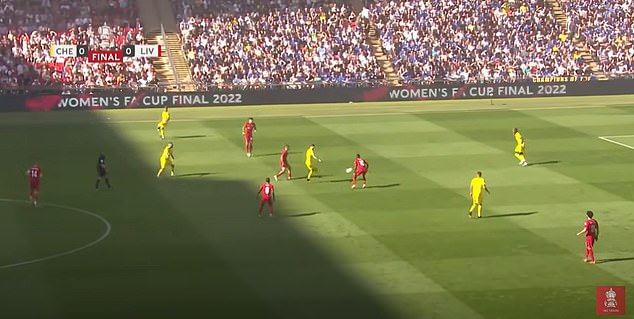 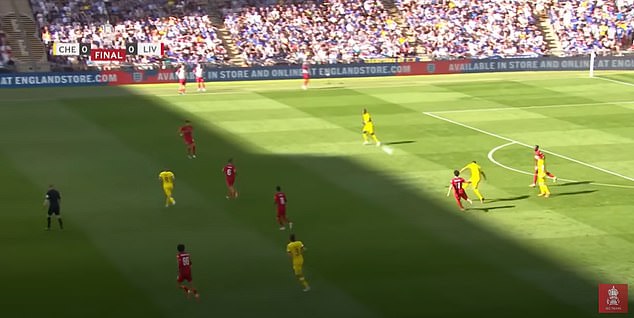 But when the Reds did step up, Chelsea looked to spray balls into wide positions for their stars

Klopp would have been particularly pleased with his side’s movements down the left. Keita looked to escape from the Blues’ double pivot and moved across to that flank, creating a formidable link-up between him, Luis Diaz and Andy Robertson.

This was a match of transitions. Again, Chelsea’s wing backs held onto their wide and advanced starting positions, with Diaz and Mohamed Salah operating in the pockets outside of their opponents’ centre backs, looking to stretch them apart.

It was a productive way to attack, but, despite them continuing to work their way into the space around the penalty area, they couldn’t score the crucial goal. Ultimately, it took a record-breaking shootout for them to hoist the trophy in the air.

Just as the Champions League final, wastefulness and questionable decision-making proved Liverpool’s undoing. Klopp will certainly be pondering over that this summer.

In the Carabao Cup final, Chelsea opted for a similar style, with their wing backs high again

He will also be concerned they failed to win any of their games against the Premier League’s top four, with their fixtures against Tottenham and Chelsea in particular proving that, when push comes to shove, they struggle to get over the line.

In their frustrating 1-1 draw at home to Spurs, they had 65 per cent possession and mustered up 22 shots on goal. They couldn’t make this dominance count, though.

Their manager was in no mood to laud Antonio Conte’s safety-first approach at full-time, admitting he does not like their ‘kind of football’ and that he ‘cannot coach it.’

But the raw statistics show that, as much as it may have been nightmarish to watch, it nullified his team perfectly. Their 31 crosses from open-play were marred by aimless lofts into the box, and just six of them actually fell to a team-mate. 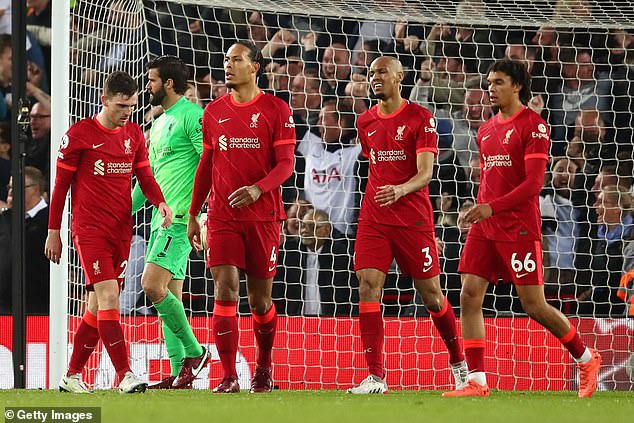 Liverpool were frustrated with a 1-1 draw with Tottenham, and failed to beat any of the top four

There is no harm in falling back to a tried and tested way of attacking, with balls into the danger zone more often than not going to result in danger or chances. However, the sheer number of deliveries was rendered pointless with the quality so low.

It was the same situation in their home draw with Chelsea last August. The Blues were reduced to 10 men after Reece James’ sending-off at the end of the first half, but Liverpool, who ailed at finding a chink in the armour, restored back to hoists.

Clear parallels exist between both these games, and that is no surprise with both London sides deploying a similar set-up defensively in their bid to hurt the Reds.

Their games with Manchester City were more chaotic. Klopp described their most recent encounter as ‘wild’, with the attacking units of the teams coming out on top. 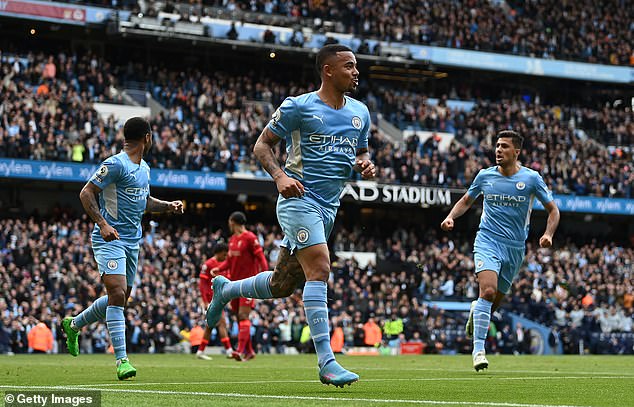 But their clashes with Manchester City were more chaotic, with both sides’ attackers on top

There was shaky defending on show, and it was City who made the best chances.

Were they put off by this? Of course not. Both sides tried to play out from the back at every available opportunity, and also tried to press high in their aggressive style.

October’s showdown was equally as enthralling as April – and the goals came from moments of real quality; two good teams doing what good teams do. 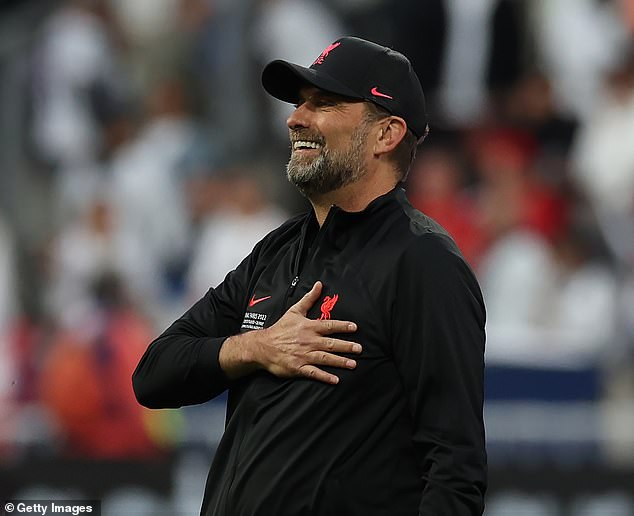 Klopp and his players have suffered from fine margins, and their poor finishing let them down

There have not been many goals from their midfielders, another problem the manager may attempt to fix this summer. Fabinho leads the way with eight goals, while Keita, Henderson and Thiago trail on four, three and two respectively.

In short, Liverpool have been brilliant with the complexities of football in their big games this season, but fell short in the simple area – scoring the goals needed to win matches. They are outrageously good, but, crucially, have lacked a little more guile.

Football, as ever, is about fine margins and despite finding themselves on the wrong end of them in painful fashion in Paris, it is a fixable problem. They may need to recruit to do that, but they are ever so close to finally achieving perfection.

Barton in talks with Bristol Rovers over becoming their new manager