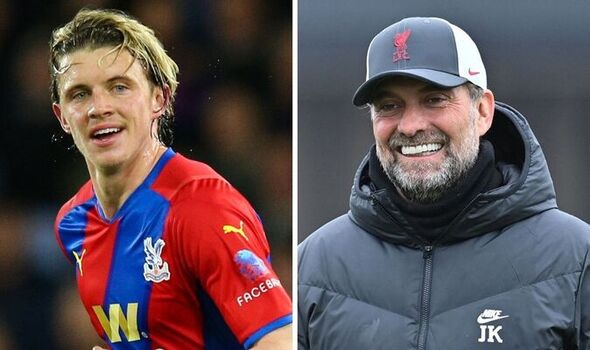 Former Liverpool star Jose Enrique wants to see Jurgen Klopp make a move to sign Conor Gallagher from Chelsea this summer. Gallagher is currently on loan at Crystal Palace and has earned rave reviews for his performances under Patrick Vieira this season.

The 22-year-old has already scored eight goals in 26 starts while also providing three assists. But it’s currently unclear what plans Chelsea have in place for Gallagher once his loan spell ends in the summer.

Palace boss Vieira has already made it clear that he wants to keep Gallagher in south London beyond this current season, but they will unlikely be the only interested party. Liverpool are not expected to be busy in the summer transfer window with Jurgen Klopp’s side well stocked in all departments.

However, Enrique wants to see his former side try and steal Gallagher away from Chelsea in the summer transfer window. Enrique tweeted: “I will love Gallagher at LFC. What a player.

“Love his quality and the intensity. It will fit perfect in Klopp’s style of play.”

Thomas Tuchel admitted last month that there had been no talks on Gallagher’s immediate future at Stamford Bridge. The Chelsea boss has been delighted with Gallagher’s development so far, but he also stopped short of promising a role for the midfielder next season.

“We are happy that he is our player, we are happy it is like this,” Tuchel said. “Would it be the same if he had stayed? Nobody knows.

“But it was a good decision because he clearly developed and we will take this decision late because there’s no need to take it today. The season is by far not over and he needs to finish the season with Crystal Palace in the best possible way and we will see what he wants, what we want, and then we will have a talk and decide. But I’m happy that he’s our player.”

Chelsea are still technically working under a transfer embargo while Roman Abramovich is still the club’s owner. But bids to buy Chelsea are currently being looked at with a shortlist already created, suggesting a new owner could be in place before the summer.

Todd Boehly’s consortium has reportedly emerged as the frontrunner, but no final decision has been made.

Aubameyang latest with Arsenal star closing in on three-year contract