LIVE: Liverpool vs Manchester United – Champions face the leaders in the biggest game of the season so far as Ole Gunnar Solskjaer’s men look to prove their title credentials against their bitter rivals

United find themselves three points clear of the Reds at the top of the pile, having beaten Burnley 1-0 in midweek and the encounter at Anfield is finely poised.

Liverpool are winless in their last three Premier League matches, and Jurgen Klopp will be desperate for his side to respond emphatically and lay down a marker in their title defence.

The United boss told the club’s website: ‘There are loads of headaches but they’re good headaches because at the moment we are playing well and we’ve got good players who are knocking on the door wanting to play more.

‘I’ll give everyone a chance to prove their fitness and hopefully we can be at full strength. At the moment, it’s only Brandon [Williams] and Phil [Jones] that are definitely out.

‘There are a couple that are doubts, but we’ll see on Sunday who’s fit.’

Jurgen Klopp’s team find themselves in the somewhat unfamiliar position of being the chasers in a title race with United sitting three points ahead of them at the top of the table.

The Reds have dropped to third following Leicester’s 2-0 win over Southampton on Saturday evening but the Foxes have played one more game.

United haven’t lost a top flight game since their defeat to Arsenal on November 1 and have won won five of their last six. 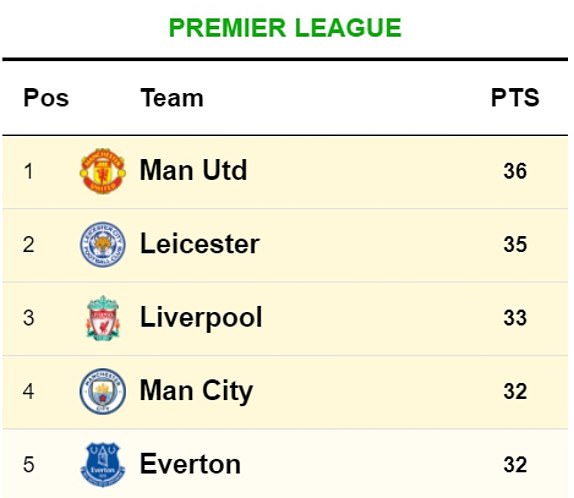 League leaders United arrive at Anfield with a three-point lead over their fierce rivals.