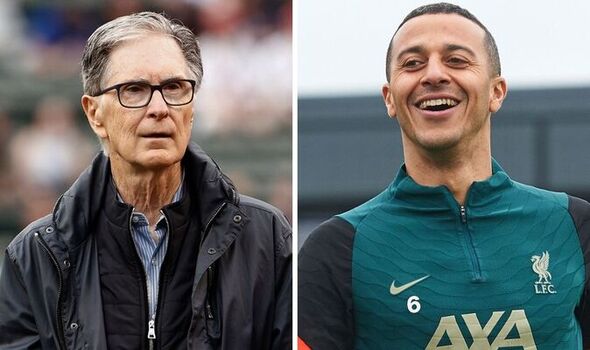 Thiago Alcantara has been linked with a move back to Barcelona over the past few months, but Liverpool’s board reportedly have no plans to sell anytime soon. The 31-year-old endured an injury-plagued first season at Anfield with some fans questioning whether he would rediscover his best form from his days at Bayern Munich.

But Thiago has managed to put his injury issues behind him this season and is enjoying his best spell in a Liverpool shirt of late. The Spaniard received a standing ovation from the Anfield crowd for his incredible display against Manchester United last month.

He’s now seen as a permanent fixture in Jurgen Klopp’s starting line-up when fit and will have another big role to play this evening in the Champions League semi-final second leg tie against Villarreal. Liverpool were lauded for signing Thiago back in 2020 for just £20million, with a further £5m in add-ons.

As one of the most decorated footballers in the world, he brings a wealth of experience as well as still playing at the top of his game. Liverpool will be hoping Thiago can play his part in the final few weeks of the season to try and help them chase a historic quadruple.

But there has been some speculation linking Thiago with a move back to Spain to join Xavi at Barcelona. Thiago was directly asked about the Barcelona links back in November, to which he said: “I play football. I’m not concerned about rumours.

“I’m focused on the duty I have to my team, the contract I have and the new adventure I have here in the Premier League trying to win all the trophies I can.”

And it appears as though Liverpool will have no worries about Thiago trying to force a move away from Anfield this summer. According to transfer expert Fabrizio Romano, the midfielder has not once thought about leaving Liverpool.

It is said the 31-year-old has two main reasons for wanting to stay at Anfield; his ‘excellent relationship’ with Klopp and the fact he wants to continue with the club’s long-term project. The feeling is reportedly mutual with the Liverpool board, who want Thiago to continue being an integral part of Klopp’s squad.

Despite no plans for Thiago to be sold, as well as Fabio Carvalho arriving, Liverpool will supposedly look to bring in a new midfielder this summer. A move for Renato Sanches is said to be ‘unlikely’ due to the Portuguese star’s wage demands.

Aurelien Tchouameni is another player being linked to Merseyside, but Monaco’s asking price may prove too much for Liverpool. He was available for around £38m last summer, but Monaco would demand a much higher fee this time around.

Ralf Rangnick NOT happy with Darren Fletcher shouting to his players