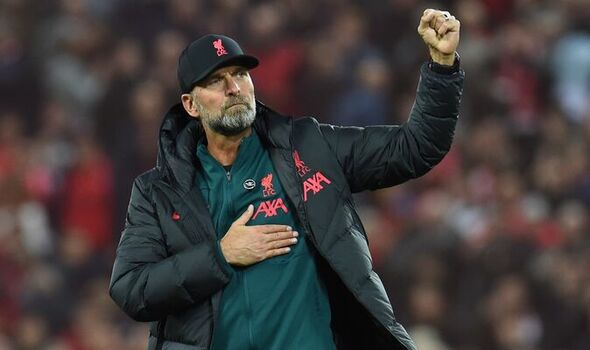 Liverpool boss Jurgen Klopp has even more reason to be cheerful following the huge 1-0 win over rivals Manchester City after receiving an unexpected boost during the match. Mohamed Salah’s sensational solo goal proved the difference, but that was far from the full story as Phil Foden had a goal disallowed while Klopp himself was shown a red card.

The feisty Premier League clash proved a handful for referee Anthony Taylor with both managers seemingly frustrated with the officiating at times. Despite Klopp seeing red, the Liverpool manager was delighted with how his side performed against a City side who had been averaging more than three goals a game in the league beforehand.

“We scored one goal and could have scored more. They had their moments as well but, especially in the box, we did extremely well. We won nearly all the duels. I think there was one free header from Haaland.

“We showed up today and that’s what we wanted to do.” But the win also overshadowed the surprising return to fitness of Trent Alexander-Arnold.

The 24-year-old picked up an injury in the defeat to Arsenal and it was reported that he was set to be out of action for at least two weeks. That would have seen Alexander-Arnold unlikely return until Liverpool’s trip to Ajax later this month.

However, Alexander-Arnold was included in the matchday squad to face City and he even came on in the dying minutes at a crucial stage of the game. He didn’t have much to do in his cameo appearance, but it’s an indication that Alexander-Arnold will be available to start much earlier than anticipated.

Whether or not Wednesday’s game against West Ham comes too soon for the full-back remains to be seen. But Klopp will be delighted to see the England international making a speedy recovery at a time when Liverpool players appear to be picking up injuries at an alarming rate.

The Liverpool boss was dealt a blow before the game against City as Ibrahima Konate was ruled out with a muscle injury. But Alexander-Arnold returning earlier than expected will come as a huge sigh of relief for Klopp.