Gabriel Jesus spared the blushes of Sergio Aguero as he came off the bench to give Manchester City a 1-0 victory over third-placed Leicester City.

Aguero added his name to the growing list of City players to miss from the penalty spot this season but it would not matter as Jesus replaced him and bagged the only goal with 10 minutes left.

It was far from a scintillating display from Pep Guardiola’s men but they will take confidence from a solid performance away to a side one place below them in the table only days before their trip to face Real Madrid in the last 16 of the Champions League.

The only sore point was, once again, their inability to score from the spot.

Leicester had seen two spot-kick shouts turned down before City were awarded one on the hour, but their crisis of confidence from 12 yards out continued as Aguero went for power but saw Kasper Schmeichel get down to his right and save.

It was a fifth penalty failure in seven attempts, meaning City side have now missed as many as they have scored despite Guardiola trying Jesus, Raheem Sterling and Ilkay Gundogan as well as Aguero.

The evening could have turned out very differently had Jamie Vardy not hit the post inside the opening 10 minutes.

Aymeric Laporte’s return has been a major boost for City but the Frenchman was at fault when his sloppy pass gifted possession to Youri Tielemans and his first-time ball allowed Vardy to get goal-side of Fernandinho.

As Ederson ran out, the former England man slipped the ball past him. The outcome seemed inevitable as Brendan Rodgers raised his arms in celebration on the sideline, but the ball struck the left-hand post and bounced back – to Vardy’s disbelief. 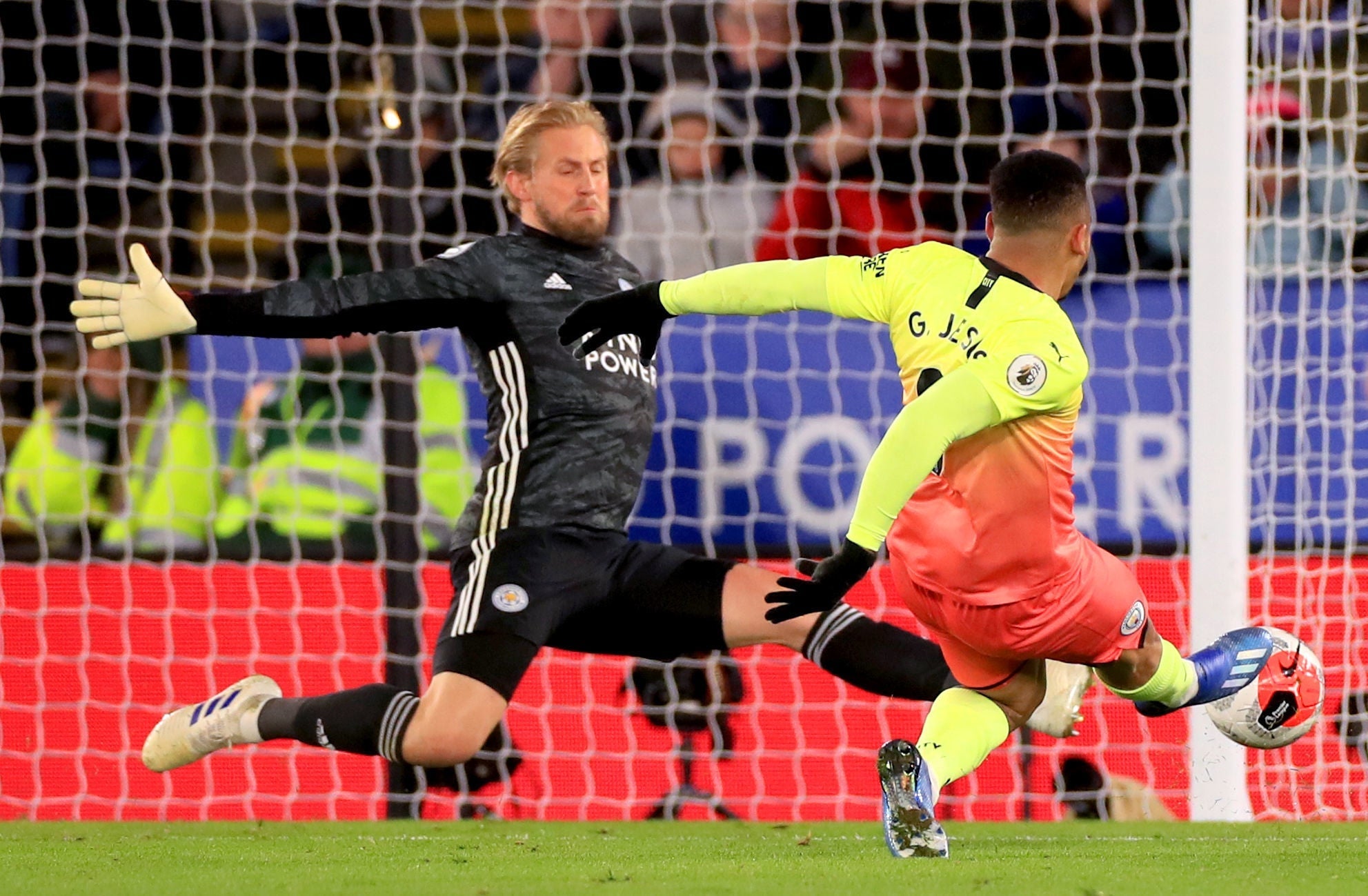 City responded well as former Leicester man Riyad Mahrez tested Schmeichel before Gundogan failed to capitalise on a flowing move by shooting tamely at the goalkeeper.

Leicester wanted a penalty when Kevin De Bruyne raised his hands to his face in the wall as James Maddison’s free-kick struck him, but referee Paul Tierney was not interested.

Another Maddison free-kick brought a good save from Ederson before the City goalkeeper was at the heart of Leicester’s second penalty claim moments later.

The Brazilian clattered into Kelechi Iheanacho, flattening the Nigerian as he tried to meet Maddison’s chipped pass – but City’s goalkeeper had just managed to beat the striker to the ball. Iheanacho returned after lengthy treatment, but was replaced at half-time.

Leicester started the second half brightly but it was City who threatened as De Bruyne brought a fine save from Schmeichel with a drilled low shot.

Their penalty came on the hour when Gundogan’s shot was blocked by the elbow of Dennis Praet as he turned his back on the ball. Tierney initially signalled a corner but VAR intervened, only for Aguero to be denied.

City’s miss inspired Leicester as they ramped up the pressure at the other end, with Vardy flashing a powerful shot wide – but City were to make the decisive breakthrough.

Jesus replaced Aguero in the 77th minute and had his arms up in celebration three minutes later.

Mahrez twisted and turned to leave Christian Fuchs wrong-footed then played in Jesus, who made no mistake to slot the ball home at the near post.

Wales vs Denmark live stream: How to watch Euro 2020 fixture online and on TV today