Manchester United have denied asking Real Sociedad to restrict protests against their owners after a fan was told he was not allowed to have his anti-Glazer flag in the away end.

In the clip the stewards are seen telling a visiting Manchester United fan that his ‘Glazer Out’ flag is being confiscated. 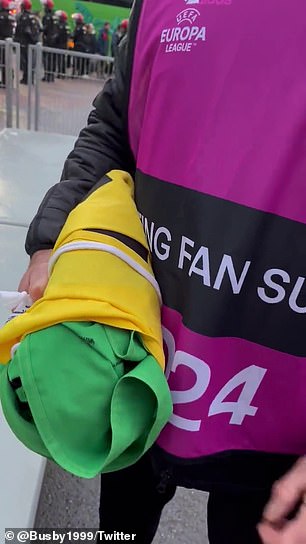 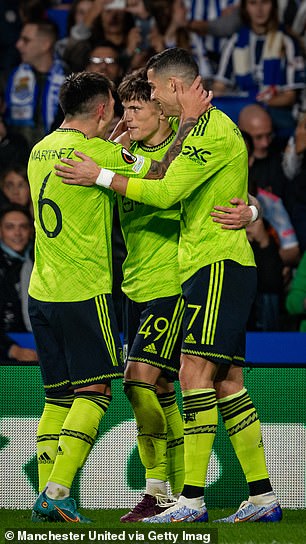 A Manchester United fan claimed he was stopped by stewards (left) from taking a ‘Glazers Out’ banner into Real Sociedad’s Reale Arena on Thursday, where United ran out 1-0 winners (right) 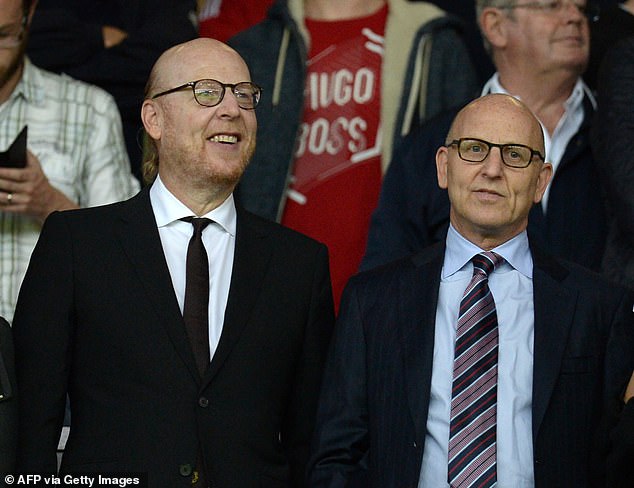 The Glazer family (Joel Glazer, right, and Avram Glazer, left) have been in charge at Manchester United since 2005 but are deeply unpopular and fans regularly protest them

‘So I’m not allowed that flag in, but everyone else is allowed their flag in, why can’t I have mine?’ the fan is heard asking.

‘So, because it says Glazers out on it I’m not allowed it in the stadium?’ the gobsmacked fan replies.

‘Stadium rules,’ is the reply from another steward. 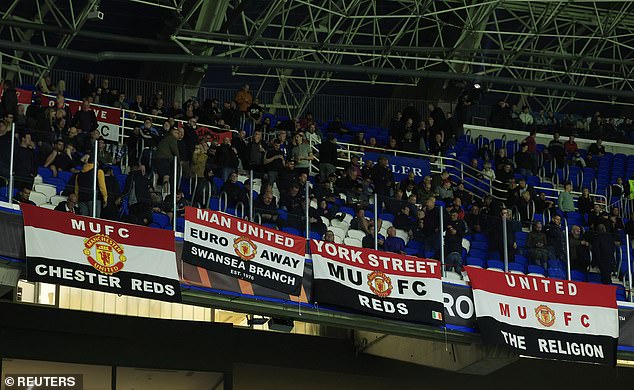 ‘United officials taking my flag off me going into the stadium because it has Glazers out on it. Sort your self out! #MUFC #GlazersOut,’ the angry fan tweeted.

But United have completely denied that they had any involvement in local stewards denying travelling fans the opportunity to peacefully protest against the club’s controversial American owners.

Sportsmail reached out to Manchester United and in a statement they said: ‘To reiterate our position, Manchester United recognises the right to peaceful and legal protest, and the club has a clear stance that anti-owner flags are not banned at Old Trafford as long as they are not offensive.

‘However, we do not control the policies of clubs that host us on our travels and the decision to ban certain flags at the Reale Arena last night was made by our opponent and not Manchester United.

‘Our stewards are instructed to act in line with the home club under the rules of the host venue, and that included a rule banning any political banners.

‘The home club interpreted this to include anti-owner banners. 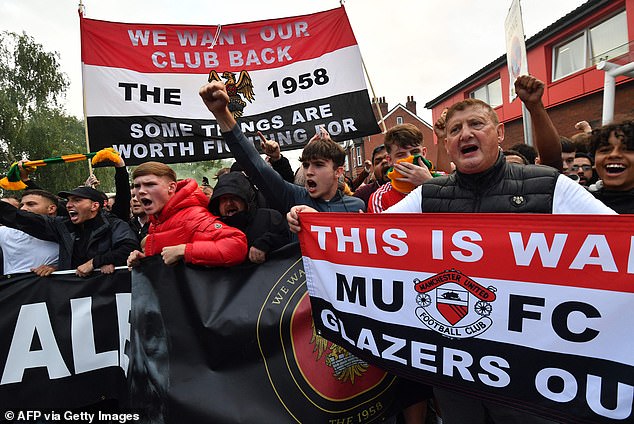 ‘At no point did Manchester United ask for or recommend this approach and we are clear to all clubs we visit that we do not advocate the confiscation of banners of this nature.’

Protests against the unpopular Glazer family have escalated in recent years, particularly following the failed attempt to get United to join the botched European Super League.

Prior to the opening game of the season, at home against Brighton, United fans came together to protest the ownership.

‘Fight greed. Fight for United. Fight Glazers,’ a large banner read, before they continued chanting against the American family in the Munich tunnel at Old Trafford.

The Glazers have reigned at Old Trafford since 2005 and have been incredibly unpopular with fans as they continue to refuse to sell.

Following the latest publication of financial results in September, in which United recorded a net loss of £115.5million, the Manchester United Supporters’ Trust criticised the Glazers for ‘rewarding failure’.

‘Today’s financial results from United cover a period when the club failed on the pitch, finishing sixth in the Premier League with our worst points tally in decades,’ the statement read. 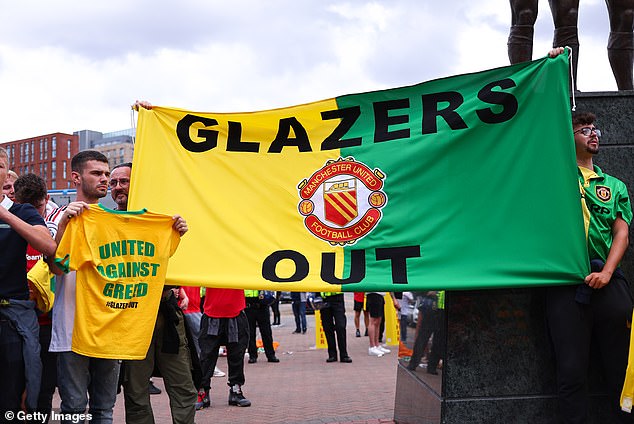 ‘Despite that, the results confirm that the owners were the only ones in the Premier League to pay themselves a dividend last year. ‘There is nothing wrong in principle with companies paying dividends to owners but there should be no rewards for failure and that is what we see here.

‘At a football club we believe dividends should only be paid when there is both financial success and success on the field.

‘Via the Fans Advisory Board and the Fans Forum, MUST representatives will now be calling for an urgent review of the club dividend policy to ensure that the rewards for failure we see revealed today are not repeated.

‘Overall, this set of results reinforces our view that the club is in dire need of new capital investment and the proposed stadium redevelopment must be funded through new issuance of shares to bring new funds into the club and not via more debt which would place a further drain on club finances.’